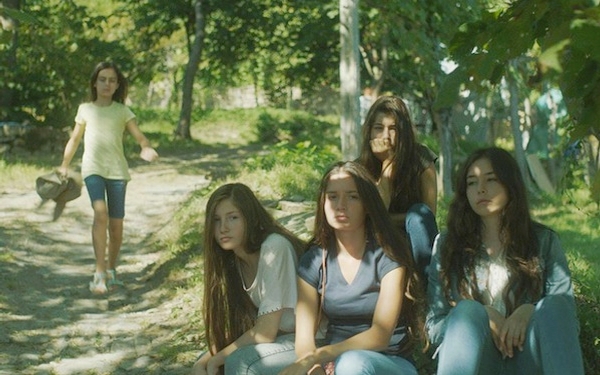 The breath of sisterhood is impenetrable. It is something otherworldly, yet completely of the soil, as we pop up alongside our fellow sister, nurtured from the same water, sun, and root. It is magic. When you watch Mustang, the official French entry for Best Foreign Film at the Oscars this year, you see how those roots are upended; you see how five girls melt into each other, ricochet apart, and then remold themselves as the elements of culture seek to contain them to a plot of land rather than the landscape at large. And so, when one sister sees another become a prisoner, she takes note. When another sees her take note, this one takes action. Eventually, these sisters become liberators of the others’ spirit. And so they go.

In her debut feature, director Deniz Gamze Ergüven sets off on the exploration of a  character who is basically a five-headed creature—the most beautiful five-headed creature to walk the planet, surely, but one that moves with one heart and various wills. These are the five Turkish sisters, living with their grandmother and uncle in a remote and gorgeous Turkish village that sits along endless winding cliffs overlooking the sea. This is their playground, at least until a neighbor spies the girls playing with boys in the ocean, sitting on their shoulders and proving an indecency that would not stand in the conservative constraints of Turkish tradition. The girls are taken out of school. They are stripped of anything that would provoke sexuality. They are made prisoners in their own home, and have only each other, the cellmates, as sources of comfort and escape, as their elders become focused on prepping them to grow into perfect wives for the arranged marriages of their near future.

Born in Turkey, and going to school in France and the United States, Ergüven had various perspectives to draw from when approaching the concept of expected female roles across the globe. Both objective and subjective frames of mind allowed her to tap into the girls’ story, and the central character and youngest of the sisters, Lale (Günes Sensoy), is how she entered that complex world. She then uses the unit of five, who become a constantly evolving army of emotion and growth, to unfold the destiny of the individual.

Ergüven explains, “The perspective of Lale was exactly the one I had. I had grown up in a family with a lot of women and girls in two generations, and I was the youngest. So I had her point of view, and there were a few things that I literally hadn’t outgrown. Then, the structure around five girls imposed itself very quickly. The fate of every girl depends on what happened to the previous ones. You have that domino effect. It was just impossible in terms of structure to say no, it’s gonna be three or four or six. It was just always five.”

When you walk into a room where these five girls, none of them sisters in real life, are drinking smoothies together, laughing heartily, you feel a pang of jealousy that you’re not in on their secret wonders of camaraderie. All hailing from Turkey, none over the age of 21, and all, but one, speaking elegant English, these young ladies are incomparably strong, graceful, and poised to make an impact on the world with the message of Mustang—a message only made possible by the trust cultivated by Deniz from the very beginning in their auditions.

“We came together many times to evolve our relationship, our sense of family, talking about boyfriends and love. Then we did some exercises together and the point of it was—we were sharing our secrets with each other, and we were hugging each other, trying to open our hearts to each other,” says Elit Iscan, who plays middle sister Ece, and who is also the only girl with acting experience.

Ergüven adds, “We had these auditions where we could see how they would listen, use the scope of their imagination, and their temper—so many things—like how they would dive into their scene for long, long minutes. Some of the sisters are the underdog of another sister. You have so many different combinations and diagonal relationships that had to work. So it was really about trying every character, changing the composition and trying different compositions. Plus, they had to look like sisters. That was really the most important point of focus in the preparation of the film, was that distribution. One day it magically clicked. When we got them together, specifically the two elder ones, they were looking at each other as if they were looking at each other in the mirror. The first time they met, we made them do these exercises where they looked into each other’s eyes, where they hugged—it was very inspiring.”

Throughout Mustang, you see how the ceaseless shifting of relationships becomes the pulse of the narrative. If one sister is to leave the frame, the others flow into the negative space accordingly. And because the majority of the girls’ world is confined to the walls of their picturesque, albeit suffocating house, personalities become further aggravated and tested. This was an idea that quickly went on to inform the aesthetics of Ergüven’s film, especially in its soundscape, and so Ergüven contacted composer, Warren Ellis (Assassination of Jesse James, 2007). Using vocals by Nick Cave, the images of Ergüven’s world become embedded with the plains of the west, where the scope of escape is wide and endless, and sometimes out of reach.

“Each time we put something super traditional or Turkish instruments on the film, it was as if we had put a fake mustache or something—it just didn’t work,” Ergüven explains. “There was this scene where the girls parade in the middle of the village in their shapeless, shit-colored dresses, and it looked like a western, like you have these very heavy lights and people looking behind the curtains, and there’s this slowness and heaviness and you almost feel like there’s gonna be balls of straw on the street. Then I thought, oh yeah, Warren [Ellis] has done this music for Jesse James, a western, and so we put his music there and it fits immediately. There’s something very organic, because I think the instruments Warren uses, like the viola and the violin and flute, go with the elements of the film, like the wooden house, which is kind of like a huge violin to me. It was very organic in the aesthetical choice.”

More than the aesthetics, than the wood and the wind that flows through the manes of these young dreaming girls, is the story that they so hope to spread to others like you and me. The story of girls taking the world in their fists and boasting it as theirs. Through tragedy and triumph, they prove that the world is not something to be locked away with a rusty key. It is not something to only be caressed by those who deem themselves worthy. What the world is is an invitation to be wild. And these girls want everyone to see that opportunity taken.

The girls, all together, say it best themselves:

Günes: We always hear about it on the news and in social media. It’s a part of our life so we were close to that. It was really good to be in this movie because you can actually spread hope.

Elit: We aren’t living these types of situations, but, for example, my aunt got married in this way—an arranged marriage—and she didn’t go to the high school. But even if you’re not experiencing these things as that person, we are experiencing it by living in Turkey. For example, there’s this scene where a guy from the government is talking about the women that should act in a way, and they shouldn’t laugh and stuff. I see that on the TV personally, and I’m shocked. But it’s also happening all around the world.

Ilayda Akdogan, as the second eldest sister, Sonay: We aren’t living the same things as the girls, but we always feel pressure on ourselves because we’re living in the same country. Maybe we don’t have the same family, but we feel the pressure.

Elit: We’ve had very good reactions, from most everyone, and they’re actually thanking Deniz for making a film about women’s perspectives, but there are also bad reactions from some people. They’re attacking the way we’re showing Turkey, that it’s in a bad way. It’s not that real and stuff. They’re attacking the scene that I have when I was in front of the bank and I was with a boy in the car, and they’re saying that’s not real, that would never happen. But, it’s like, how do you know?

Tugba: I think they know it’s happening, but they don’t want people to think that it’s happening. That’s why we need more movies like that, to help people know about it.

Ilayda: People act like they are blind to this kind of story. But we saw it. We heard it. It’s real.

Günes: This is something everyone has to know, I think, because it’s a really important part of life.

The film will open in NY at the IFC Center and Lincoln Plaza Cinemas.  There will be Q&As with Deniz Gamze Erguven at both theatres. For further details and to purchase tickets, visit http://bit.ly/1LmPiYk

For more information about MUSTANG, visit the film's official website.