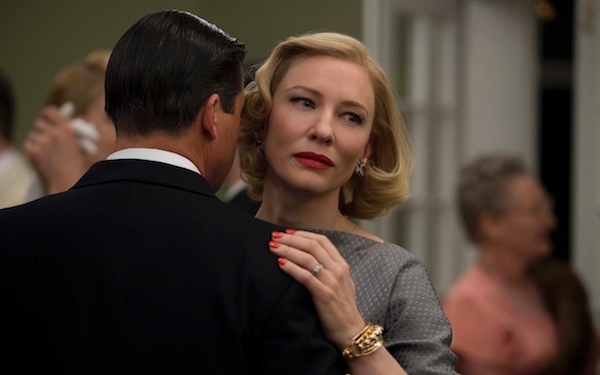 It’s hard to imagine a movie season without Cate Blanchett sweeping in and enchanting us with her unholy level of class, beauty, and strength. Even when you think the movie itself isn’t worth doling out twelve bucks at theater, Blanchett seems to change your mind with an incomparable sense of magnetism. So, you may be pleased, yet unsurprised to hear that director Todd Haynes’ latest period drama Carol is yet another accomplished starring vehicle for Blanchett, as well as a film well worth your movie-going time.

Haynes, who is now an unofficial aficionado when it comes to telling tales of marginalized women of history (e.g. “Mildred Pierce”, Far From Heaven), saw yet another invaluable story within Patricia Highsmith’s formative 1952 novel The Price of Salt. Known for her stories rich with tension and psychological play, like The Talented Mr. Ripley and Strangers on a Train, this particular story finds more subtlety and grace within its love story structure, but what makes it such a formidable part of her arsenal is that the concept of love becomes riddled with doubt and rank with mistrust. So, by pairing such a literary power with the cinematic sensibilities of its director, Carol takes on a whole new breadth of command and scope.

In Haynes’ adaptation, the character of Carol Aird (Blanchett, Blue Jasmine), a 40-something mother of refined taste who lives in the blistering hustle of 1950s New York, also happens to be a recluse.  Not by her own intentions, you see, but because she happens to be a lesbian during a time when such a lifestyle was not simply frowned upon, but unlawful, sinful, and wholly wrong. It seems that hiding her true nature has gotten her far enough, that is until she meets Therese Belivet (Rooney Mara, The Girl with the Dragon Tattoo), a young, hapless department store worker with a dopey boyfriend who has little focus in life besides tinkering with a camera. From the moment they face each other, separated by a counter that might as well have been hot glue, coyness is no longer an option when the attraction becomes something of necessity. It’s when Carol’s separated husband Harge (Kyle Chandler, “Friday Night Lights”) becomes wild with jealousy and embarrassment that he threatens to take away her daughter, and she must weigh the consequences of her sexuality with her inextricable need to be a mother.

Just like Haynes’ previous narratives, all of which are deeply intertwined with the aesthetics of time and place, Carol pulses with the buzzing energy of NYC life in the 50s, while also chiming into its suffocating social customs. The costumes and the production design all allude to the superficial wonder that so many people strived to meet—that good old-fashioned American Dream—and Carol herself is no different. She too wants that perfect family. She too wants to live happily ever after behind a white picket fence. The only difference is that she wants to have the lady of her choosing by her side, and thus she unwillingly becomes the victim of her own dream.

Certainly we must speak of the electricity between Blanchett and Mara, two powerhouses that know how to command attention. Mara as the timid and perfectly awkward Therese is such a welcoming counterpart to Blanchett’s oozing confidence and radiant sexuality. The control of Blanchett’s gaze, the knowingness of her touch is enough to make us all blush and feel all gooey inside, and Mara projects that reaction rather convincingly. Haynes, who has directed Blanchett before in her groundbreaking role as Bob Dylan in I’m Not There (2007), clearly remembered what kind of effect the actress has when given the chance. And what’s more is the addition of Sarah Paulson (“American Horror Story”) as Blanchett’s old lover and best friend, who adds a poignantly rich and conflicting complement to both women’s affection for the other.

What are less convincing and appear more as afterthoughts are the male relationships in the narrative. Jake Lacy (Obvious Child) as Mara’s over eager boyfriend and Chandler as Carol’s overbearing ex both fail to complete the larger picture. Despite not being the romantic center of the story, their role in the façade that these women have to put on is crucial, and it seems Haynes and screenwriter Phyllis Nagy hastily cast them aside, resulting in a structural void that would have raised Carol to greater heights.

Even so, Haynes has found a meaningful voice in these stories of yesteryear that still hold great meaning today. By tapping into those characters whose troubles are by no means outdated, he reminds us to not forget the history that informs the future. We’ve grown, but we haven’t conquered just yet, and Carol is just another reminder of the strength that it takes to do so.