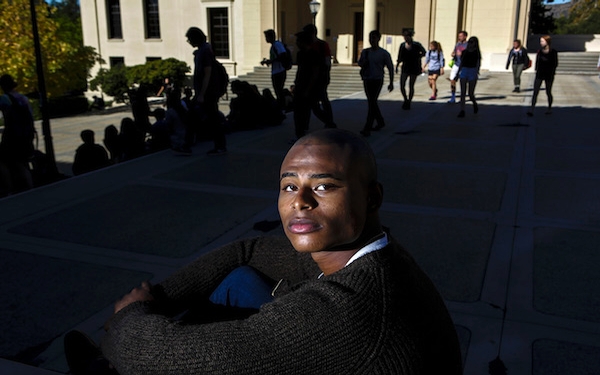 Alton Luke II, a black student who has been criticized for not joining the movement, on November 20, 2015, in Los Angeles.
(Credit: Irfan Khan/Los Angeles Times)

LOS ANGELES — Alton Luke II is an African-American sophomore at Occidental College who backs the broad goal of racial equity for students. But he has chosen not to support the minority student movement aimed at ousting college President Jonathan Veitch and improving campus diversity — and bluntly announced his views on Facebook.

For that, he has paid a price.

Luke said some of his friends, black and white, have started ignoring him. He’s been called ignorant. He said the hostility of some protesters toward those with different views is a major reason he is not supporting their uprising.

“They’re doing what they claim white people do to us, which is marginalize us and cast us as the bad guy,” said Luke, a graduate of Long Beach Polytechnic High and kinesiology major who aims to become an orthopedic surgeon. “You can’t have a different opinion here or you’re persecuted. But I’m standing against their tyrannical and unjustified actions.”

Protesters at Occidental, Claremont McKenna, Yale, Ithaca, Brown and other campuses appear to have wide support as they demand action to address the bias some minority students say they face.

But sharp dissent over the movement’s tactics is also emerging, as critics have begun to step forward.

At Claremont McKenna College, where protests led to the resignation of a top administrator, more than 300 students sent a letter to the campus community expressing support for the fight against racial discrimination. But they called the use of hunger strikes to force Dean of Students Mary Spellman to step down “extremely inappropriate,” and also castigated the cursing at administrators at a recent student protest, the “cyberbullying” of students over an offensive Halloween costume and the filing of a federal civil rights complaint against Claremont.

“Never have we been more divided as community. Never did we think the day would come where we were scared to speak our minds, where fear of our fellow students’ rage silenced us,” said the letter, signed on behalf of the students by Nathaniel Tsai, a junior majoring in government. “It is time for the demonstrations and the hostile rhetoric to stop.”

At Yale University, nearly 800 students, faculty, staff and others sent a letter to campus President Peter Salovey expressing concerns about several student demands — among them mandatory diversity sensitivity training, an ethnic studies requirement and the firing of a faculty member who questioned staff warnings about culturally offensive Halloween costumes.

Zach Young, a junior majoring in ethics, politics and economics, had joined the Yale student “march of resilience” against discrimination. But he helped spearhead the letter after he saw the subsequent student demands — especially the call to fire Erika Christakis, a faculty member who had challenged the costume warning from the Yale Intercultural Affairs Council, asking whether there was no longer room for students to be “a little bit obnoxious … a little bit inappropriate or provocative or, yes, offensive.”

The letter defended Christakis’ free-speech rights and called the training and curriculum demands “a menace to the cause of liberal education because they are clearly driven by a particular political agenda devoted to conversion instead of intellectual exploration.”

Salovey announced that he supported Christakis.

Young and Luke said they have never been threatened with physical violence for their views — unlike some protesters, who have reported receiving anonymous threats on the Yik Yak social media site.

Greg Lukianoff, president of the Foundation for Individual Rights in Education in Philadelphia, said students had always been the most reliable allies in his 14 years of defending free speech rights in higher education. But no longer, he said.

Some faculty members have also spoken out against the protests, including Glenn Loury, a Brown University professor who has researched racial inequality and wrote that he was “appalled” by student allegations of endemic campus racism. Loury, who is African-American, said he had been lavished with university resources for his work and well treated by open-minded colleagues.

In a Facebook post, he rejected student calls for a “revolutionary reshaping” to fight campus bias through diversity training, special staff to recruit more minority faculty and other steps, saying they could lead to “intellectual mediocrity.”

At Claremont, a second critique was made last week by two students who called for letters of support for Spellman, saying she had been unfairly targeted. The former dean became the lightning rod for long-standing complaints by minority students alleging university inaction in addressing racial bias and providing resources, such as funding and a dedicated space, to help them.

In hundreds of fliers posted throughout the campus, students described broad experiences with discrimination, including vandalism at the Queer Resource Center, defacement of Black Lives Matter posters, racial slurs and perceived mockery of their cultures.

Spellman was particularly criticized for telling a Latina student she would work hard to support students who “don’t fit our CMC mold.” The former dean could not be reached for comment.

In marshaling support for Spellman, seniors Rachel Doehr and Katharine Eger said they supported the broader effort to give voice to marginalized students but expressed concern that the effort “quickly morphed into a torrent of seemingly uncontrollable anger that left casualties in its wake.”

The students said Spellman had counseled hundreds of students at Claremont and led efforts to establish a new campus center for sexual assault prevention and support, among other things.

Taylor Lemmons, one of two students who launched a hunger strike in support of calls for Spellman’s resignation, said she felt “deepest empathies” toward such students. But she said Spellman had ignored marginalized students and that her resignation — which, she noted, officials chose to accept — would help the campus move forward.

“It is not enough to help just some students,” Lemmons said, adding that she did not regret her hunger strike. “She was legally responsible for all students, and students were blatantly ignored.”

Campus President Hiram Chodosh has announced that steps would be taken to better address diversity on campus, including new administrative leadership positions.

The letter of dissent from Tsai and others asked the Latina student who filed a federal civil rights complaint against Claremont to reconsider her action and allow the campus to find other ways to resolve the issues.

It also criticized what it called the cyberbullying of a Claremont student and her friend who were posted on social media wearing Mexican sombreros and mustaches for Halloween. The students have repeatedly apologized, but requests to remove the photo have been rejected.

At Occidental, Luke’s Facebook post drew overtures from some movement supporters who affirmed his right to disagree and their willingness to listen.

Danielle Raskin, a junior in urban and environmental policy and a movement leader, said those with questions or doubts were encouraged to visit the protest site to discuss and learn more.

“As a community and movement, we’ve been welcoming and inclusive to those with different views,” she said.

But Luke is wary, saying the campus’ political climate is stifling. Last week, he said he was attacked on social media as “trash” who was endangering women by throwing a party and offering them free admission.

“Either you’re liberal or you’re wrong,” he said. “It’s not a healthy environment.”