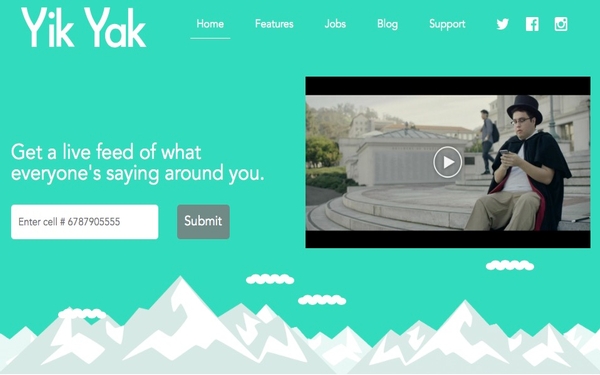 PHILADELPHIA — After two tumultuous weeks, Richie Torres will return to the campus of Washington College in Chestertown, Md., after the holiday break with a mission: Get fellow students to stop using Yik Yak.

The app, a social-media platform used to post anonymous messages, has exploded in popularity on college campuses. Administrators even use it to gauge student moods.

But Torres and other friends blame cyberbullying, in part, for the suicide of Jacob Marberger, the teen from Cheltenham Township, Pa., whose disappearance this month sparked a multistate search, halted classes and brought a national spotlight to the small college.

“We’re all telling people to uninstall Yik Yak, because it’s harmful,” said Torres, a Washington College sophomore who was close friends with Marberger. “It’s probably the most cowardly thing to do, to degrade someone anonymously to feel powerful.”

Marberger’s body was found last weekend in a park in Berks County, Pa. Police say he died from a self-inflicted gunshot wound.

As a potential motive, his friends point to the days and hours before his Nov. 16 disappearance.

The 19-year-old political science major had been outgoing, talkative, and intelligent — “a walking encyclopedia” and student government leader who didn’t worry about looking cool or being popular, according to Torres.

“He was extremely bright,” said Tahir Shad, a Washington College political science professor who leads the school’s Model United Nations program. “I would say one of the brightest kids I’ve had in the program — and I’ve been running the program for almost 27 years.”

But in October, after Marberger was bullied on campus — in one incident, students placed a trash can full of water against his door so that it flooded his room — he waved an antique gun around one night while intoxicated, according to school officials.

The incident, reported weeks after it happened, led the school to suspend Marberger. He was cleared to return after he passed an evaluation to assess whether he was a risk to himself or others. But he still was awaiting disciplinary hearings that could have led to his suspension or expulsion.

“He was kind of just a little quiet about it, which is very rare for Jacob,” Joseph Swit, Marberger’s freshman roommate, said in an interview. “But he said, ‘I’m dealing with it.’”

On Nov. 15, Swit and Marberger ate dinner together in the dining hall, Swit said. His friend seemed in good spirits.

Hours later, Marberger was asked to resign as speaker of the Student Senate — a position he loved so much that he dressed in a shirt and tie for every meeting.

“Jacob was taking disappointment after disappointment,” Torres said. “It was just a domino effect, and he’d never really experienced failure.”

Then came more hurtful Yik Yak posts. Marberger, like others at the close-knit school of 1,400, checked Yik Yak often, his friends said.

“There was people saying he should have been kicked out (of school),” Swit said. “I guess at some point it might have gotten more personal.”

The app has raised concern on other high school and college campuses, including accusations of anonymous bullying and racism. A University of Missouri student was arrested this month after police said he posted a racially charged shooting threat to Yik Yak.

School administrators monitor it to gauge the mood on college campuses. It can have positive uses, said Washington College spokesman Michael O’Connor, such as alerting them to technology problems or opinions of dining hall food.

But it can also be a forum for rumors and insults.

After the flood of nasty messages about him, Marberger returned to his parents’ home in Cheltenham at 3 a.m. on Nov. 16, swiped a rifle, and disappeared.

Though he made no direct threats, officials shut down Washington College, sending students home a week before the Thanksgiving break. Cheltenham High School, his alma mater, was on “lockout” with increased security, and the district’s elementary schools had recess inside.

An arrest warrant and search for Marberger, coupled with the safety warnings and decision to shut down the college, drew a wide spotlight. School officials stood by their safety precautions.

“The one thing that we have not heard a single complaint about from any parent is our decision to close,” O’Connor said. “And part of that is just the environment … that we live in.”

Six days after he fled, Marberger’s body was found at the rural Hawk Mountain Sanctuary in Berks County.

On Wednesday, his family held a memorial service at a funeral home in Philadelphia. His classmates said they planned to attend.

O’Connor said Washington College has not yet determined whether it will attempt to ban or discourage the use of Yik Yak in the wake of Marberger’s death. He said other plans were underway to welcome students back to campus, and to “collectively grieve.”

But Torres and others say they will be pressing their classmates — and others — to stop the anonymous attacks they believe were so hurtful it led Marberger to kill himself. “I wish he would have realized how much he touched people,” Swit said, “and reached out when he was doing as bad as he was.”