By Dion Lefler - The Wichita Eagle 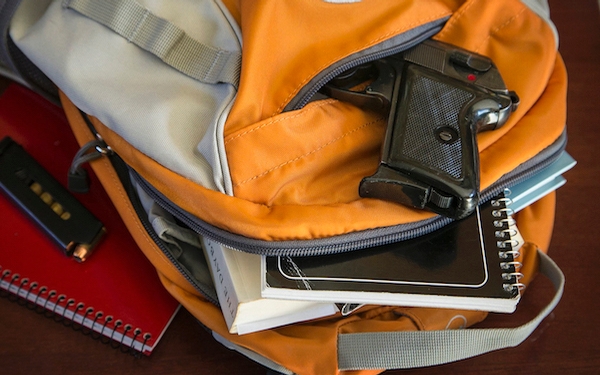 A committee made up of student body presidents from Kansas state universities has invited all students in the system to weigh in on a survey to gauge attitudes toward guns on campus.
(Credit: Mike Hutmacher/Wichita Eagle/TNS)

WICHITA, Kan. –– As Kansas moves toward a time when guns will be as welcome on university campuses as laptops, students are starting to take notice and talk about how they’ll handle that day when it comes.

For many, it’s no big deal. For students who grew up in a largely rural state, surrounded by guns, having the student at the next desk carrying one in pocket or purse doesn’t feel particularly unfamiliar or uncomfortable.

Others are predicting disaster when any student or employee over 21 can carry concealed on campus, without a permit or training in how and when to deploy a deadly weapon.

The Students Advisory Committee, made up of student-body presidents from all state universities, has invited all students in the system to take a survey to gauge attitudes toward guns on campus. Results aren’t expected until sometime next month.

But it has stirred a new interest among students who, until now, have been mostly silent on the subject.

Interviews at the system’s three major campuses – University of Kansas, Kansas State and Wichita State – found a range of opinions.

The biggest pushback against concealed carry so far has been at KU, where vocal student activists have demanded a gun ban on campus as part of a list of demands for more diversity and “safe spaces” for students, especially minorities, to pursue their education.

Students’ thoughts on guns appear to break down into three broad categories:

––Hard-liners: The strongest supporters of concealed carry, they say carrying a gun at the university is their inviolable constitutional right. They often channel the National Rifle Association’s assertions that guns on campus will make everyone safer from the kinds of mass shootings seen at colleges in recent years, because there will be more people on hand to shoot back.

That’s a view represented by Austin Gilpin, a Wichita State freshman from Pratt majoring in communications.

“I’m very supportive of the (concealed carry) legislation,” Gilpin said. “I think it’s time the good guys can defend themselves on campus.”

“I’m pro-it,” said Robert Himelrick, a sophomore in mechanical engineering who commutes to Wichita State from Bel Aire. “I don’t like regulations. If somebody wants to do something, they can do it.”

––Doomsayers: These students are convinced that guns on campus will lead to more deadly violence and an escalation in danger to everybody. They echo the Brady Campaign Against Gun Violence and argue that more weapons on campus won’t have any effect on mass shooters, but could lead to deadly escalations of ordinary college conflicts.

Testifying to that view is Madelyn Johnson, a psychology and Spanish major finishing her degree this year at Kansas State. She said she’ll be gone before concealed carry takes effect, but she worries about her younger sister, Cassie, a sophomore.

A former intern for state Sen. Oletha Faust-Goudeau of Wichita, Johnson contacted the senator and university administrators about how she can oppose concealed carry on campus.

“I don’t think it’s fixing the problem (of campus shootings), it’s just amplifying it,” she said. “K-State is my home and I don’t want that to be any part of it.”

––Leaners: These students can go either way on the issue, but worry that the devil’s in the details. They don’t necessarily oppose concealed carry per se, but often express concern over the lack of a training requirement and worry that the rules on who can carry and where may be too lax.

Kevin Dice, 20, a computer science major at K-State, said he doesn’t have a problem with the concept of concealed carry, but he worries about “people who look at this as an opportunity to carry a gun just for the sake of carrying a gun,” and he thinks training and a permit should be required.

It probably won’t matter much what students think. The decision forcing universities to allow guns on campus was made by the state Legislature in Topeka. The Board of Regents and university administrations are charged with writing policies to accommodate the law.

In 2012, the Kansas Legislature passed the Personal and Family Protection Act, requiring that concealed-carry permit holders be allowed to carry their weapons in almost all public buildings. This year, the Legislature followed up with a bill revoking the permit requirement and allowing anyone who can lawfully own a gun to carry it loaded and hidden without a permit or training.

To ban guns in any particular building, a public agency has to provide “adequate security measures to ensure that no weapons are permitted to be carried into such building.”

Adequate security is defined in the law as “use of electronic equipment and personnel at public entrances, “including, but not limited to, metal detectors, metal detector wands or any other equipment used for similar purposes.”

The Legislature allowed universities to keep banning guns on their campuses until July 1, 2017, to give them time to adjust to the new requirements.

The regents have circulated a draft policy that would ban open carrying of firearms, which the regents are still allowed to do, while allowing concealed carry, which they have no choice but to accept.

The policy will identify campus locations where guns won’t be allowed and the security measures necessary to ban guns while complying with the law.

––Each university will have to provide secure storage for guns –– possibly at the university security office –– for when students with guns have to enter a secured area where guns aren’t allowed.

––Students who live on campus and don’t want to put their guns in the secure storage would have to provide their own means of locking up their weapons in their dorm rooms when they’re not carrying them.

––Gun carriers wouldn’t be allowed to display their firearms, except while transferring them from storage to concealment on their person, except in those instances when it is necessary for self-defense.

––Attendees at sporting events, who now go through a relatively light bag search at the entry gate, will probably have to go through a full metal-detector screening in the future to get into the stadium or arena. A ban on guns would have to be noted on the event ticket.

Gun control is a front-and center issue for the group Rock Chalk Invisible Hawk, campus activists at KU who recently presented a list of demands to the university administration that they say would make campuses safer and more inclusive.

Katherine Rainey, a senior from Shawnee, said the group plans to speak to lawmakers “and letting them know that KU is pretty much in opposition to conceal and carry on campus.” Rainey, who is studying psychology and anthropology, said bringing the demand to the university first was a way to spur university officials to also take up the matter.

Kennedi Grant, a junior from St. Louis who also is involved in the group, said marginalized students feel danger on campus already without concealed weapons and that “adding that to the mix will only cause more chaos.”

Grant, a journalism student, said allowing concealed firearms on campus increases the likelihood of a shooting. “It’s not even a matter of if anymore, it’s become a matter of when,” she said.

Some students unaffiliated with the group also raised concerns about school shootings, but offered a mix of opinions on whether allowing concealed firearms would put KU at greater risk.

If it is allowed, she said she’d prefer that guns be out in the open where people would know who has them.

“I would definitely at least have it be open carry, but I prefer no guns at all,” she said.

Carlos Montoya, a sophomore from Shawnee, on the other hand, said he thought guns on campus could make the campus safer if a school shooting did occur.

“I guess with school shootings becoming a more prevalent thing in today’s society, it’s good to have that protection on campus,” said Montoya, who is studying biology. “So I don’t have a problem with it.”

However, Montoya said he probably would not choose to carry a gun if doing so becomes allowed on campus.

K-State students expressed mostly nuanced views centered more on how guns might be used if allowed on campus.

“I appreciate the ability to protect myself,” said Johnny Monroy, an Army veteran and mechanical engineering student. “As long as it’s done responsibly, it’s fine.”

Monica Brich, a freshman from Shawnee majoring in mass communications, said she thinks guns on campus is a bad idea, mostly because too many college students also party and drink.

She said she doesn’t see the necessity for guns, especially in the hands of “people who have no idea what they’re doing.”

“This campus is pretty safe without having concealed carry,” she said.

While KU and K-State are in the college towns of Lawrence and Manhattan, Wichita State is in an urban area.

And while KU and K-State students tend to think of the classroom mass-shooting scenario first, some Wichita students raised the issue of personal protection in the context of getting to and from their cars.

Development has reduced the parking on the main Wichita State campus and pushed students to side streets. A student was shot to death this summer in the parking lot of the Fairmount Towers dorm, the first fatal shooting on campus since 1993.

Morgan Anderson, a junior in marketing, said she lives off campus and worries about being victimized by crime.

“We keep a gun in our house and I feel more safe and secure,” she said.

Gilpin said he thinks concealed carry “would be a deterrent,” keeping off-campus criminals from targeting students.

He suggested frugal students should use the free parking and shuttles provided.

And while students interviewed at Wichita State seemed to be the most gun-friendly of the three main state universities, there is still substantial opposition to concealed carry.

“I think it’s a horrible idea,” said Kaylee Rasmussen, a freshman studying art education. “I don’t think you should have no training and then just be able to carry a weapon wherever you want to.”

She said even in during a mass-shooting, more guns wouldn’t help. She envisions a situation where “they try to shoot each other and end up shooting the entire class.”

Michelle Duft, a junior who has worked in retail and returned to campus to get a teaching degree, said she’s also worried about crossfire.