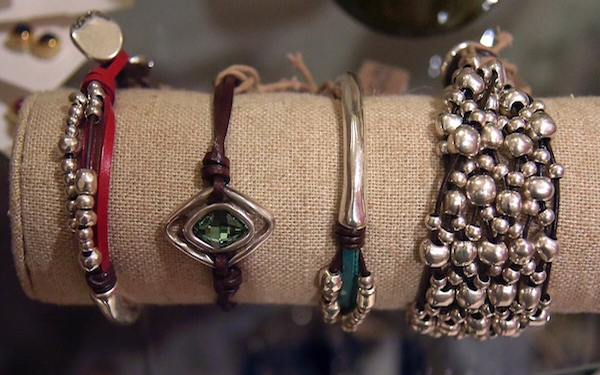 BALTIMORE — Want to make an impact at your upcoming holiday soiree? Famed designer Nicole Miller has you covered.

Miller, the self-professed plastic surgeon of the fashion industry — her clothes are known for making women’s figures look better — caught up with us at a recent boutique opening and shared her tips for nailing the right holiday party ensemble.

“A woman can do a lot with it (embellished tops) — wear skyscraper pants, a skirt or jeans,” Miller said. “I also like to add a fur vest to a cocktail dress or gown. It looks really cool.”

As far as accessories are concerned, Miller suggests taking a minimal approach.

“Don’t wear too much,” she said. “Maybe wear big earrings or a statement necklace.”

This week, Miller made the quick visit from New York City to show her support for Panache owner Vanessa Pivec, with whom she’s worked for 28 years. Pivec celebrated the grand re-opening of her boutique after she completed a renovation of the space.

“She’s fabulous,” Miller said of the owner. “She’s a brilliant retailer and entrepreneur.”

Miller is currently finalizing her fall collection, which she will showcase in New York this February. She said she’s switched the theme of the collection three times so far.

“I went through a lot of crazy things. I played with the themes of old hotels in New York City, South American art, homeless. I nixed all of them,” she said, adding that she’ll have everything decided by the beginning of December.

A fashion novice might think that a 90-day turnaround for a collection could be a daunting task. But not for Miller, a master of the design process. It was Miller, after all, who created her iconic dress silhouette of a bodycon side-ruched sheath.

“They’re nip and tuck dresses,” she said. “My dresses hid all the problem areas.”

Miller thinks that a major problem facing the fashion industry is “fast-fashion” — or cheaply made clothes that are easily disposable.

“I think it’s bad for the environment. People are making too much stuff,” she said. “People instead should buy more investment clothing.”

What can we expect from Miller in the future?

“More!” she said with a smile. “Our shoes and handbags are doing well. We’ll have more menswear. I don’t like to be bored. I love to be doing stuff.”

However, we probably won’t see Miller on another reality show. Miller appeared on the Sundance Channel series “All On The Line” with fashion editor Joe Zee in 2011.

Miller said she was too self-conscious about the show.

“It came out four years ago, and I haven’t watched it,” she said.