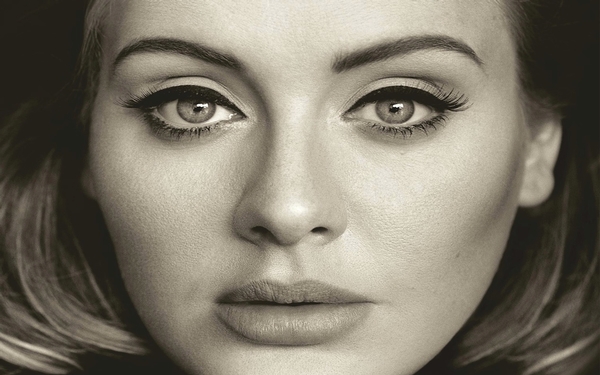 Adele’s new album, titled “25” is … wait for it … drum roll … everyone listening? … very good, a deserving follow-up to “21,” one of the greatest-selling albums of all time.

There must have been overwhelming pressure on Adele, already 27, to give an adoring world something to keep up the adoration. She responds confidently and in full voice, with a coherent concept, sustained bouts of excellent songwriting, and brave singing against some of the best production your ears can find.

“Hello” kicks it off, and it is brilliant, a classic as soon as it dropped. Everyone on the streets seems to be singing it. Dramatic opening chords, those trademark Adele background vocals, and a pulsing chorus that is as black as it is blue. She reflects on the “million miles between us,” the tumultuous changes year by year in your 20s. Incredibly brave singing. You could hardly ask for a better opener.

Then comes “Send My Love,” stripping down to a single guitar ostinato, a very wise choice. (One complaint is that, as the album wears on, there’s too much tsunami-of-sound, full-in-the-face, late-era-Barry-Manilow-drums stuff. Adele can do this only so much, and she does it slightly too much.) “We both know we ain’t kids no more,” she sings, driving home this album’s message: Time passes, we don’t stay the same, and we hope against hope that love will comfort us.

Back to whomping drums on “I Miss You.” It’s another piece of excellent songcraft. “I want to step into your great unknown” is one of many telling lines in this album; Adele is well-known and should be better known as a fine lyricist. I’d say this tune is too much like “21” — except it’s so committed, so resolute. She’s not breaking up; she’s wondering what, if anything, is next.

The central tune might well be “When We Were Young.” She tells the beloved, “You look like a movie and sound like a song,” still, just as you used to. “Let me photograph you in this light / in case it is the last time that we might be / exactly like we were before we realized” we can’t stay the same. It’s fear of aging, of losing the perspective of “19” and “25.” Believe me, many millions will hear these lines and nod: “I so know.” She isn’t where she used to be and will never be again. More reckless singing, with one memorable, stratospheric note.

“Remedy” takes the theme and kicks it forward: “I remember all of the things I thought I wanted to be.” This sounds different, a sprightly waltz with piano. That’s all it is, voice and piano, and that, in a frequently dark, crashing album, is welcome. Delivered with total assurance. People can comfort one another through the pain and being urged into future selves. It’s a moving exploration for all ages.

“Water Under the Bridge” may well be a future single. Another welcome change-up, with a gentle dance beat. It gets a little Euro-celestial for me, but a lot of people will love this track. Adele has long been a leader, with original lead-chorus interactions, and that brilliance is on display here.

“River Lea” is the last real standout until the end. Adele grew up in Tottenham, where the Lea does flow, and she ponders the paradox of being rooted (the river is “in my roots, in my veins, in my blood”) yet being carried forward. She can’t go back, but she’s also always there.

And then, well … “Love in the Dark,” not the strongest song. “Million Years Ago” has an interesting Jobim-era samba sound, but retreads much-treaded ground, alas. “All I Ask” is similarly undistinguished, except for a single, searing line: Let’s “play pretend we’re not scared of what is coming next.”

“Sweetest Devotion” is the most cheerful moment on this album, a sweet verse to a swingin’ six, a woo-hoo chorus, a promise of commitment. Forward! To 28 … 29 … and … ulp … 30? It ends with the one bit of fun here, a baby’s voice, perhaps Adele’s 3-year-old, Angelo. Devotion is the last word, because it has to be.