Marrow is new life for Kids These Days alums 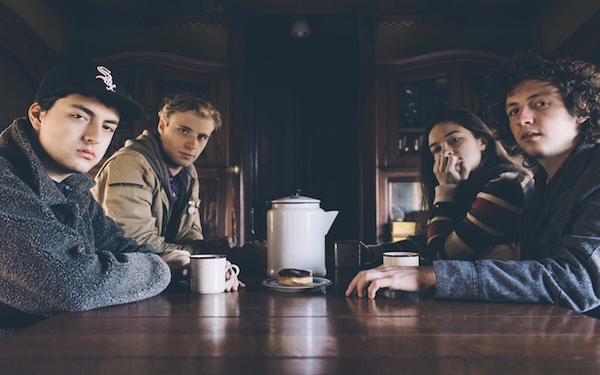 Two years ago, Liam Kazar, Macie Stewart and Lane Beckstrom were key members in a fast-rising septet, Kids These Days, with a major-label contract.

Now they’re once again starting from scratch in a four-piece rock band, Marrow, with drummer Matt Carroll, slugging it out in front of small crowds in clubs around the country — and they wouldn’t have it any other way. Marrow’s recently released first album, “The Gold Standard,” burns with ambition and covers a wide range of styles, from the folk-electronica of “Ocean of Glory” to the prog-rock freak-out of “Quarter to Three.”

“It’s definitely back to square one,” says Kazar, who was known as Liam Cunningham until he recently adopted his mother’s maiden name to honor the Armenian side of his heritage. “It’s been a slow build and I knew that it would be. But it’s much closer to my heart.”

Marrow represents an intriguing second act for the Kids These Days alumni, which also include rapper Vic Mensa and trumpeter Nico Segal. After recording a debut album produced by Wilco’s Jeff Tweedy, the band signed a deal in 2013 with Republic Records, a subsidiary of Universal Music Group. But Kazar pulled the plug. “I was the guy who broke it up,” he says. “I’m not sure if everyone was blindsided, but it certainly gave everyone a good slap in the face: ‘This has been going on for four years and now it’s not.’”

Kazar enjoyed his bandmates, but not the all-hands-on-deck approach to songwriting. He had confided in Stewart earlier that he was becoming increasingly less happy in the band and the way songs were pulled apart to serve the needs of everyone in the multifaceted group. Stewart realized she was feeling much the same way.

“Talking to Liam made me realize this is not what I want to be doing the rest of my musical career,” she says. “Every song needed a rap verse and horns to make sure everyone was represented, and sometimes songs don’t have a place for those things. I was consciously withholding some songs in hopes that I would be able to do something with them in the future. At first, I was nervous (about Kazar leaving the band). But after a while, I thought, ‘I’m 19, I’ve got my whole life ahead of me. It’s time to do something different.’ “

Soon after walking out, Kazar called Stewart to continue working together with him and Beckstrom.

“I was not sitting there waiting for Kids to run out and had already conceptualized the next move in my head,” he says. “But there was no doubt I was going to keep doing music. I wanted to write songs, play in a band, and I also wanted to do Macie’s songs.”

Mensa took the breakup the hardest of all his old bandmates, Kazar says. “There were a few months where Vic and I were not talking, but we gave each other a big hug at Lollapalooza about two months later (in the summer of 2013). Everyone in the band has worked with everyone else since then.”

Last year, Kazar toured and played keyboards with Tweedy, a new band formed by Jeff Tweedy and his son Spencer, and Stewart began playing in a duo, Homme, with Kazar’s sister, Sima Cunningham, and toured with Chance the Rapper. The two songwriters also worked through a stockpile of songs for “The Gold Standard,” which was released two months ago.

“It’s very collaborative in this band, but me and Liam each have ownership in a way over our songs, which wasn’t the case in Kids These Days,” Stewart says. “We direct where we want the song to go, we don’t have to relinquish it emotionally.”

Last spring, they began recording in the newly built basement studio in the home of Kazar’s parents, and there were a lot of artistic questions to juggle. “We had to learn how to be a band, how to make a record, how to build a studio,” Kazar says. It in part accounts for the widescreen stylistic approach on “The Gold Standard.”

If there was a quibble about Kids These Days, it was the scattershot feel of some songs. Marrow also can sometimes come off as too ambitious in its arrangements, but Kazar and Stewart anticipate a more focused set of songs for the band’s next album, which they’ll begin recording next month.

The eclecticism “feels relevant to the way I live my life and the music I listen to,” Kazar says. “I understand that criticism, but you just try to make music that makes sense to you. … Our approach is, let’s record some songs, play some shows, and keep moving forward. I was listening to a ‘WTF’ podcast with Lorne Michaels, and he was talking about ‘Saturday Night Live.’ He was saying, ‘We don’t go on air because we’re ready, we go on because it’s 11:30.’ I’m into that approach. Don’t be too precious about any one record or song. Let’s just keep making stuff.”