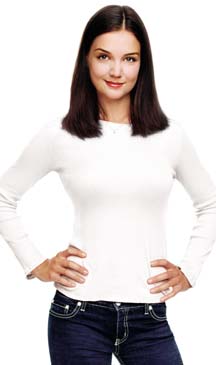 If there’s one undeniable quality that can forever be linked to actress Katie Holmes, it’s that she’s absolutely, undisputedly adorable. So likeably adorable, in fact, that when asked about her and fiancée Chris Klein’s wedding plans at a recent interview promoting her new movie, First Daughter, Holmes just slyly grins, cups her hands together and says, coyly, "That’s just between us, but thank you for asking."

With her luminescent hazel eyes, megawatt smile and warmly familiar facial expressions, Holmes — most widely known for her six-year stint as lovesick tomboy Joey Potter on the WB teen drama "Dawson’s Creek" — is the kind of girl who, if given the chance, could be in line to be Hollywood’s next Reese, Nicole or Julia. But, according to the actress — whose romantic comedy First Daughter opens wide Sept. 24 — her main prerogative in the entertainment industry is to simply carve out her own path.

"I feel like this business is so laced in luck. You can do everything that somebody tells you to [get] to that point, but there’s no guarantee," she says. "I think it’s more important to do things that you enjoy doing and that you’ll be able to look back on and say, ‘I did have a career. I did sacrifice a lot to do that wonderful thing that I loved and I’m proud of what I did.’ Instead of, ‘Yeah, I did all this stuff and I still never became the next [big star].’ It’s important for me to just do the things that I like."

Perhaps that’s why, after being catapulted to instant stardom via her role on the popular "Dawson’s Creek," which wrapped in 2003, Holmes is now taking pains to pick and choose roles that appeal to her liking. Last October she starred in the indie film Pieces of April, in which she played the black sheep of her suburban family, and now, a year after "Dawson’s" came to an end, she headlines director Forest Whitaker’s First Daughter, playing the title role of Samantha Mackenzie.

In the film, which bears an overwhelming plot resemblance to January’s Chasing Liberty, Samantha, the only child of the current U.S. president (Michael Keaton), is planning to go off to college. She’s lived a privileged — albeit sheltered — life up to this point and is now yearning for a life of her own and just a sliver of independence. Although she arrives at the fictional Redmond University via presidential motorcade and is constantly flanked by suit-clad secret service agents and hounded by the paparazzi, Sam still holds out hope that she’ll fit in.

Her simple dream begins to take shape in the form of handsome coed James (Marc Blucas). He’s a grad student and resident advisor who sees Sam for who she truly is and, because he can, helps her ditch her heavy security and the press in exchange for a good time. Sam thinks she’s found the perfect guy until, much to her dismay, she finds out that James is — gulp — actually an undercover secret service agent guarding her at her father’s request. Needless to say, Sam is not too happy about the arrangement, but understands that she is in need of extra protection because of her heightened visibility.

"When I was growing up, I always fantasized about, oh God, what would it be like? I mean, having your dad be the president and be so powerful. You get to live in that big house and wear those big dresses," says Holmes, whose character in the film, when granted a little bit of freedom, goes a little bit too wild and finds her picture on the front pages of some of the nation’s biggest publications. "I used to always think, you read something bad [about the children in the first family] and it’s like, why are they acting up? They’re presidential children."

Even so, Holmes understands what it’s like to deal with the pressures of being in the public spotlight.

"You want to make sure that you’re a responsible person because you’re moving around in the public eye and people look up to you," she says. "And especially when you’re on a show that’s geared toward young people, you do want to be a nice role model."

For the adorable, well-spoken Holmes, the title of role model seems aptly appropriate.