Q&A: Why Spike Lee used satire in ‘Chi-Raq’ to take a shot at gun violence 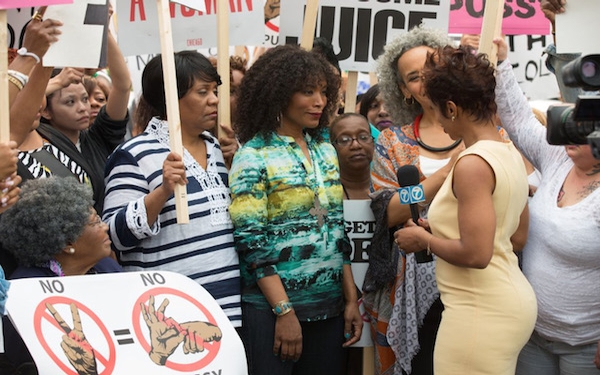 Spike Lee and controversy go together like macaroni and cheese. His latest project, “Chi-Raq,” is no different. But after almost 30 years in the industry, the Atlanta-born, Brooklyn-raised film director has learned to take it all in stride.

“I know how my folks are, and I love my folks,” Lee said, the corners of his mouth inching upward. “I just try to be patient with my people.”

The movie, produced by Amazon Studios and distributed by Roadside Attractions, is a modern retelling of the Greek satire “Lysistrata” set against the backdrop of gang and gun violence in Chicago. Starring Teyonah Parris with a supporting cast that includes Nick Cannon, Angela Bassett, Samuel L. Jackson, Wesley Snipes and Chicago natives John Cusack and Jennifer Hudson, the film takes its name from the language of local rappers who are comparing the tough streets of their city to an embattled Iraq.

Many Chicagoans, including Mayor Rahm Emanuel, took issue with the picture when it began filming this year and again when the trailer was released recently. Lee sat down with The Times while he was in Los Angeles to receive an honorary Oscar at the academy’s Governors Awards this month.

He discussed “Chi-Raq,” gun violence and his overall mission of increasing diversity in Hollywood.

Q: Many people have questioned your use of satire to discuss guns and gangs in Chicago. What does satire allow you to do that documentary or a more straight drama piece doesn’t?

A: The best way I can answer that is that there are many different ways to tell a story. It could be done in a documentary or a straight drama, but that’s not how Kevin Willmott, the co-writer, and I chose to tell the story. The story came down to our understanding that satire would be the best because satire uses humor to elevate the issue you’re describing. Now, Showtime’s getting ready to have a series on Chiraq, and many other people will have their own version. This isn’t the definitive thing on it.

Q: How do you respond to the controversy regarding the film as a whole and its title?

A: People are very protective of their city no matter what city it is. They’re sensitive to whatever is bad about their city. I understand that, but I did not come up with the term “Chiraq.” Local Chicago rappers did that.

Q: What’s the biggest misconception you think people have of the movie?

A: There’s a faction that feel like I’m making light of the situation on Chicago’s South Side, that I’m making fun of it, but that’s entirely not the case. And also, why would Jennifer Hudson, who had three members of her family murdered, be in a film that makes fun of that? Why would the organization Purpose Over Pain — an organization no mother want to be a member of, an organization of mothers who’ve had their sons and daughters murdered by senseless violence on the South Side of Chicago — why would they be a part of a film that makes a mockery of their children?

Q: How does the conversation about guns and gangs in Chicago interact, for you, with the Black Lives Matter movement?

A: It goes hand in hand. I love what Black Lives Matter is doing, and I was marching in New York City after Ferguson and for Eric Garner. I’m with that, but I would be less of a person if I’m out there on the streets talking about the cops and private citizens who killed our people and then remain mum about us killing ourselves. For me, that don’t work.

It don’t matter what complexion the hand or finger is that’s pulling the trigger that’s killing somebody. We’ve got to be vocal on both parts.

Q: What message do you want people to take away from “Chi-Raq?”

A: Usually I never answer that question, but this is going to be an exception for “Chi-Raq.” We’ve got to think about guns in this country. We’re not talking about taking people’s Second Amendment rights away, but more thorough background checks, titling guns like you title a car, voting for politicians who don’t get contributions from the National Rifle Association. We’ve got to do something.

Q: What words of advice do you give to your New York University students, particularly those of color, and other young filmmakers?

A: You’ve got to grind. Last year, my agent and I went to Sundance with script in hand for “Chi-Raq.” Everybody said no except Amazon. And even after Amazon said “yes,” we had to stage two readings for them. I tell my class that that’s another example that it only takes one “yes.”

Q: What has been your greatest lesson in the industry thus far?

A: You get knocked down, you’ve got to get the … back up. Like a boxer, you put your hands on the rope and pull your … up.