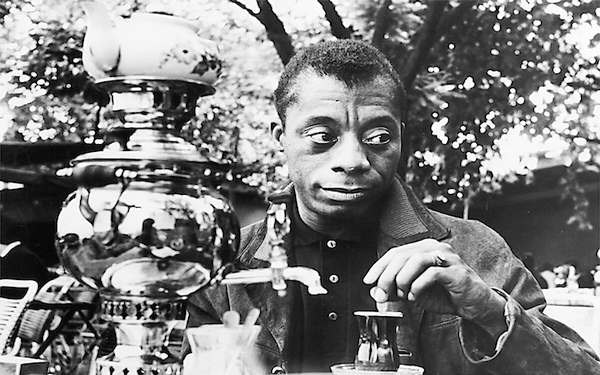 A scene from Karen Thorsen's documentary "James Baldwin: The Price of the Ticket." (Sedat Pakay/South Side Projections/TNS)

When I sat down last week to watch “James Baldwin: The Price of the Ticket” (in a digitally restored version of the 1989 documentary), it was one day after the terror attacks in Paris — the city where Baldwin found his confidence and professional footing — and at the end of a week of college campuses publicly grappling with racism both subtle and overt, a subject Baldwin tackled head-on over the course of his career.

Baldwin’s works have gone in and out of fashion over the years, but now feels like a prime moment to revisit one of the 20th century’s most formidable intellects.

Originally conceived as a cinema verite project, the filmmakers were to follow Baldwin as he worked on his next book. Karen Thorsen was on board as producer, and renowned documentary filmmaker Albert Maysles was at the helm. (Maysles and his brother David are best known for their seminal verite films “Grey Gardens” and the Rolling Stones/Altamont documentary “Gimme Shelter.”)

“But then Jimmy died (in 1987) before we shot any footage,” said Thorsen. “So what ended up happening is a very different film. Once Jimmy died, (Maysles) said, ‘How do you do a cinema verite about a dead person?’ Because when you’re doing cinema verite, you’re in the moment and capturing what’s going on — and when you edit it together, you find the telling moments that are interesting. If you’re doing that with somebody who is no longer with you, that becomes impossible.”

Thorsen took over as director and adopted a style she calls cinema verite passe, “which just means cinema verite in the past tense.” Most of the film is footage of Baldwin himself — TV interviews, but also informal footage shot throughout various periods of his life, including his time in a small Swiss village when he wrote what would become his most famous novel, 1953’s “Go Tell It on the Mountain.”

It’s so unexpected to see Baldwin in an alpine sweater horsing around with kids on the snowy streets of the village. This is long before the age of selfies and ever-present smartphones — and yet people (a lot of people, it turns out) were drawn to Baldwin enough to film him for personal or amateur purposes.

“We found hundreds of archival film clips,” said Thorsen, “so we stitched those together so that he would tell his own story.”

It’s Baldwin’s interviews, though, that still pack a punch. When he talks of escaping to Paris, where he could better reflect on the issues of race in America: “It gave me time to vomit up a great deal, a great deal of bitterness.”

Or when a British interviewer asks: “When you were starting out as a writer you were black, impoverished, homosexual. You had to have said to yourself, ‘Gee, how disadvantaged can I get?’ “

Unflappable, Baldwin almost laughs: “Oh no, I thought I hit the jackpot — it was so outrageous, you could not go any further. So you had to find a way to use it.”

Or this, from an appearance with talk show host Dick Cavett — we only hear Baldwin’s response to what appears to have been some gaslighting from a fellow guest:

“I don’t know if the real estate lobby has anything against black people, but I know that the real estate lobby is keeping me in the ghetto. I don’t know if the board of education hates black people, but I know the textbooks they give my children to read and the schools that we have to go to. Now: This is the evidence. And you want me to make an act of faith — risking myself, my life, my woman, my sister, my children — on some idealism which you assure me exists in America which I have never seen?”

The film doesn’t delve much into Baldwin’s personal life. You don’t really know if he had any long-term relationships or how they might have shaped his life — a decision Thorsen says was guided by the footage available. Baldwin apparently didn’t talk about his private life much on camera. Or, as Thorsen said, “It wasn’t recorded in any way that made sense to include in the movie.”

What are included are interviews with those who were close to Baldwin, among them his brother David, William Cole (his ascot-wearing editor at Knopf), biographer David Leeming, and friend and poet Maya Angelou.

(As a side note, Chicago filmmaker Bob Hercules is raising money on crowdfunding site www.Kickstarter.com