Apps could ‘Uber-ize’ some holiday deliveries 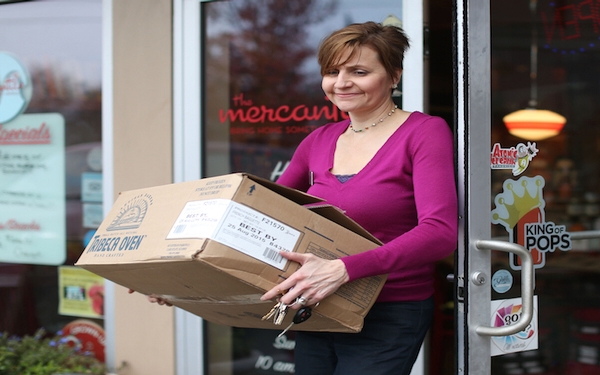 Janea Boyles, director of operations for The Mercantile, brings out a box for delivery. The business uses an app-based delivery service. (Bob Andres/Atlanta Journal-Constitution/TNS)

ATLANTA — The delivery vehicle that pulls up to the house this year might be a blue Toyota instead of a brown truck.

Phone apps that enable regular citizens to hire themselves and their cars out to businesses as delivery persons — much the same way Uber turns them into taxi drivers — are expected to gain traction during this year’s holiday shopping season, experts say.

Atlanta-based Kanga and Roadie are just two players in the new variation on the “sharing economy,” where startups and freelancing consumers share a piece of the multibillion-dollar logistics pie that has been the domain of UPS, FedEx and the Postal Service.

The model is most useful for individuals or small businesses making local sales. Retail giant Amazon, though, has rolled out its version of app-based delivery — Amazon Flex — to more than a dozen cities. Amazon will still deliver through traditional services but will use Flex drivers in certain cases.

With holiday spending expected to grow 3.5 percent, making a delivery between classes or on the way home from work could put hundreds of dollars in the pockets of motivated drivers. Pay can range from $10 to $25 hourly or $8 to as much as $300 for businesses that base compensation on distance and weight of packages being transported.

“This is an idea that can’t be stopped, especially now that so many companies are promising one-day delivery,” said John Challenger, CEO of outplacement firm Challenger, Gray & Christmas. “We live in an instantaneous world.”

There are stumbling blocks to address. As with ride-share services Uber and Lyft, the delivery apps have to earn trust from users that ordinary citizens can do the job, with adequate security and background checks, experts said. The packages have to be delivered on time and at a good price.

Drivers are paid a percentage of the delivery fee and must provide insurance coverage for their vehicles. The companies insure goods against damages. In November, Roadie — whose backers include Google Chairman Eric Schmidt’s TomorrowVentures and the UPS Strategic Enterprise Fund — announced the company would insure goods up to $10,000 through UPS Capital, a subsidiary of Atlanta-based UPS.

There are already delivery apps for food, such as InstaCart and Grubhub. They face particularly tricky challenges because of handling requirements and issues such as keeping hot meals warm.

This new world of delivery speed is a change from a decade ago. Then, getting something in less than three days was cause for celebration.

But online retail giant Amazon changed that in the past five years, setting two-day delivery as the benchmark for quick turnaround.

The company upped the ante two years ago by pushing same-day delivery and in some cities, delivery in two hours or less. It has built a network of regional warehouses that enable the service.

“Everybody is moving in this direction one way or another, or at least they are investigating it,” said Michael Bentley, a partner with Revenue Analytics.

Most of the “sharing” apps are new or have been around for only a couple of years, and they are not limited to the holidays. They touch just about every industry, including electronics, furniture, clothing and food.

Marc Gorlin, who founded Roadie, said apps could revolutionize shipping. Goods can be delivered where motorists are already going instead of creating trips, which alleviates traffic.

“I definitely think it is a game changer,” he said

For AT&T retiree Ethel Bennett, a delivery job with Kanga offers two things she craves: flexibility and the chance to hit the road.

“I’m working three or four days a week making deliveries on a schedule that I choose,” said Bennett, an engineer who retired from the telecom in 2000 after 30 years. “I love to drive, so this is perfect for me. I couldn’t have imagined anything better in my retirement.”

It has helped Janea Boyles grow catering business that she would otherwise have to turn down at her store, The Mercantile in Atlanta.

“As an entrepreneur, you learn to say yes to business and pray that you can pull it off,” she said. “I can make that happen with Kanga better than I could on my own.”

But she said equally as important is having drivers who represent the company well.

Andrew-Erumetse Kadiri, who has worked for both Kanga and Roadie, said the key for drivers is taking on jobs that are close to home to maximize the number of jobs he or she can handle.

Kadiri moved everything from electronics to furniture in a Nissan Maxima and van he sometimes uses.