An Analysis of The Safest Schools for Women 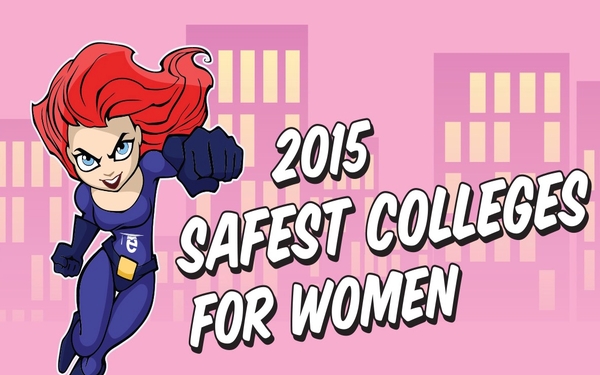 A little over a year ago, President Obama reported, “An estimated one in five women have been sexually assaulted during her college years…of those assaults, only 12 percent are reported, and of those reported assaults, only a fraction of the offenders are punished.” While sexual assault can happen to anyone, men included, women are the forefront of concern. These reports are wildly astounding, which makes it hard for parents to wave goodbye to their daughters going to college. Colleges are teaming up with organizations or creating their own campaigns to prevent sexual assault. What was once a hazy and confusing document, schools have redefined their Campus Sexual Assault Policies and Treatment to spell it out clearly.

Interestingly, when researching “Safe Schools for Women,” we couldn’t find a clear list. While “Safe Schools” are a start in the right direction, they may not necessarily be the best specifically for women. Before you send your daughter to an all-girls school*, eCollegeFinder has spent the time analyzing “The Top Safest Schools” list created by The Daily Beast to highlight specifically noteworthy schools. We’ve read policies, crime reports, campus safety programs, and R.A.D (not just meaning cool) articles. We’ve also compared the ratio of crime reports to student enrollment and stumbled across some interesting finds. By no means are we here to bash their list, but we decided to expand and analyze it when stressing an emphasis on women’s safety. The following factors were looked at:

With our findings we decided to create a spin off list of theirs, weighing in on safety specifically for women. Below is the analysis of our findings:

By first glance of The Daily Beast’s Rankings, we questioned some of the schools that made the list. Grand Valley State University had a high number of sexual assault reports (14), which seemed too high and unsafe for women. After seeing the enrollment of 21,972 undergrad students and running our percent test, the numbers didn’t look as bad compared to another school with a lower number of sexual assault reports but who had a lower number of students enrolled.

We’d like to give a quick shout out to the four schools with no reports of sexual assault:

Something interesting we found was the crime reports in relation to Trulia’s 2015 crime reports in the geographic area, in which, there was an uncertain relation. We found many “Green” areas, meaning the lowest and safest areas, did not necessarily mean the crime rates on campus and campus owned property were low. Similarly, many “Multicolored” areas, meaning they contained a range of low to high record of crime, within the school and surrounding area showed low crime reports on campus and campus owned property. Going into our research, we predicted Trulia’s crime identification would outline or correlate with the general crime results found on campus. While these results were not definite for every school, for many, this shows there may be a disconnect between schools reporting to the general public’s crime reports. Having an accurate visual map like Trulia’s may be useful for future college freshman in search of safety. One positive find was that we can assume that the campus safety police are doing a snazzy job protecting their students in Trulia’s “Multicolored” areas, which yield low crime rates percentages on campus and campus owned property.

And finally, no matter what the size of the school was, we saw mostly all campus related crimes to be on campus and/or public campus property, rather than noncampus property owned by the school. Noncampus crime report numbers were included in our calculation though.

Continuing the numbers conversation and segueing into program offerings, we found the schools with a higher student enrollment resulted in higher safety services for women (and also men) and offered more programs/services on prevention on protection against sexual assault. This could correspond with our findings that those schools with higher student enrollment have higher reports of sexual assault, therefore those schools are trying to prevent those numbers from increasing any further. A factor could also be the higher budget larger schools have, which allows for more safety programs and technology.

All schools receiving Federal financial aid must have a Title IX coordinator, but we saw some variation with the way schools carries out this role. Some of the larger schools went above and beyond by having a Sexual Assault Prevention Coordinator. Most people think of Title IX’s gung-ho law as the enforcer for women’s equal rights to participate in the same sports as men. What many people don’t consider is Title IX’s intolerance for Sexual discrimination also includes sexual misconduct. It is the Title IX coordinator’s role to ensure that everyone effected by the law is aware of their legal rights, and that “policies, procedures, and practices, compiles with its legal obligations under Title IX.” In the incident of sexual assault, it is the coordinators role to take on the case and follow it through to the end to ensure legal justice is served and that the school is restored to normality. Some coordinators took on the large role of both sports and sexual assault management, but we applaud those who separated the Title IX Coordinator’s role into two separate jobs: One for sports, and one for Sexual assault misconduct. Having a focus on one aspect allows for stronger involvement and commitment for each of the respective factors. While we saw no potential correlation between increases of Title IX Staff resulting in a decrease in Sexual Assault crime reports, most of the larger schools were able to have additional staff in addition to the singular Title IX Coordinator. For the safety and security of the victim, we still encourage schools to hire additional Title IX supportive coordinator roles.

Interestingly, some schools with no reports of sexual assault left their impressive numbers at that and didn’t do much to address the matter. While we congratulate them on their “0” score, everyone knows sexual assault data is not 100% accurate because women may not report all incidences. Even though the numbers may not skyrocket up if all incidences were reported (compared to a larger school), we were sad to see minimal effort for sexual assault prevention programs or even workshops. Some of the larger schools had resources such as a women’s center, weekly sexual assault educational events, several sexual assault programs (such as The Rape Aggression Defense Program, R.A.D a nationally leading violence prevention program used by thousands), assault and harassment support meetings, weekly self-defense, self-defense PE courses, self-defense clubs, peer educational activities, and even a sexual assault statewide summit!

Looking at some of the cool tech and bonus safety features, we unfortunately found they showed no direct correlation with decreasing crime. Almost all schools had a campus police escort service and a blue light emergency phone service. Some neat safety features were crime reporting apps, emergency sirens, a crime report incentive program, and VoIP Campus Safety phones installed into all classrooms. Some of these features have helped prevent some crime incidences and have helped make reporting crime easier for students, however in the grand scheme of things, the crime reporting numbers were still too high to say the safety features make a dramatic impact. Two features that we believe do made a valuable impact are panic alarms inside dormitories and checking identification to get inside dormitories.  Georgia College & State University installed panic alarms in all residence halls and apartments for students to press in case of any emergency. It doesn’t act as a fire drill alarm, so there is no reason to be embarrassed to press it. Pressing the button will alert the campus alert to come to your aid. Having a simple and easy button is something we feel is very effective and may be a factor in the reason why they did not score poor reports for the overall crime rate percentage in relation to student enrollment. Most schools offer an I.D. swipe to enter the building, but Pace University also has actual campus police checking to make sure each face matches with their ID card. We like this feature, and it seems to be working, because they have 0 crime reports in an urban setting. That is hard to accomplish, so that extra “human” touch to scan for any potential dangerous suspects is a good security feature.

Our list is a small sample of thousands upon thousands of schools, so we can infer that our sample may represent the larger scheme showing larger schools generally results in more sexual assault prevention and protection programs. We do see that larger schools often influence smaller schools, so we hope to see increased actions to prevent and protect women on campus. Especially the schools on the list that offer no additional program support or only offer one mere workshop on sexual assault for the entire year.

Last but not least our thoughts when gathering the crime reports. We were able to access our crime reports thanks to The Jeanne Clergy Act law passed in 1990. It states that “all colleges and universities who receive federal funding to share information about crime on campus and their efforts to improve campus safety as well as inform the public of crime in or around campus.” Finding each school’s “Annual Fire and Safety Report” was easy, however getting up to date statistics was rather difficult. All schools only have 2013 records being the most recent (annual summary) report and many only show from 2011. Our findings and records were based off of 2011-2013, however, we could help but question why more recent data hasn’t been recorded up to at least 2014, since we are soon approaching 2016. It almost seems as if there is something to hide. Many changes can happen within a year, especially considering the growing technology used for safety and improved and revamped sexual assault programs put into place. Though we are sharing to you the most accurate and up to date information, we wish the date could be even more polished and precise than it already is.

So what is all of this saying? We feel that these safe schools deserved a new order in accordance to providing safety measures to women. Below is the new Top 25 Rankings after our analysis:

Our Rankings On The Safest Schools For Women*

7. The University of Texas – Pan American

10. The University of Montana

15. University of Nebraska at Omaha

We are NOT implying those colleges with lower scores are dangerous schools to attend. We congratulate all 25 schools who were ranked as being safe and applaud them for setting the bar high for other colleges.

Campus News
California State campuses with most COVID-19 cases have one thing in common – they like to party
1,652 views