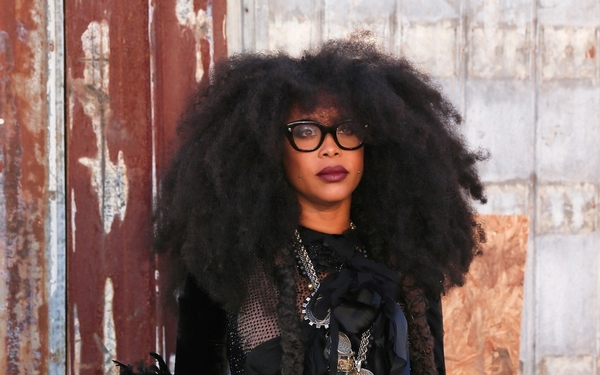 It’s well past dusk on a recent evening, and Erykah Badu is stretched out on plush leather seats inside a sleek party bus equipped with blacked-out windows and a ceiling with green, white and yellow lights mimicking a constellation of stars. The two of us are cruising down La Cienega Boulevard amid post-rush-hour traffic on a route that the chauffeur is most certainly making up as he goes.

This is how she wants me to experience the mix tape she recently crafted over a 12-day stretch — an unconventional setting for an interview, yes, but Badu is anything but conventional.

Badu is glowing, literally, by a bevy of blue incandescent bulbs and the laptop that contains the sole copy of the phone-themed mix tape “But You Caint Use My Phone.” “The label doesn’t even have it. I sent it straight to iTunes,” she said of the new record, which was released Friday.

Named for the famous refrain from her now iconic kiss-off “Tyrone,” the mix tape is Badu at her most experimental.

Written, recorded and mixed in the living room of her Dallas home, “But You Caint Use My Phone” fuses together the hard, cerebral beats currently dominating rap radio with the smooth R&B, jazz and psychedelic art-rock that’s been her signature approach to soul music since her genre-shifting debut more than 18 years ago.

The origins of the record, her first new material since 2010’s acclaimed “New Amerykah Part Two (Return of the Ankh),” begin with Drake’s zeitgeisty, meme-spawning smash “Hotline Bling.” A few weeks ago the singer uploaded her cover of the ear worm — recorded as a birthday gift to her close friend and road manager Big Mike — to her Soundcloud, and it became a viral hit, logging 1 million streams in just two days.

“What it also did was introduce me to that frequency of music because I hadn’t done it,” Badu, 44, said of the cover (the two were texting back and forth, she said, as we were riding around town).

Parked in front of her hotel after our road trip, we spoke about crafting the mix tape and finding new inspirations.

Q: What was it about “Hotline Bling” that struck a chord with you enough to want to cover it and build a project around it?

A: It’s beautiful in its simplicity. It’s a beautiful song, very simple. I love simple songwriting like that.

Q: Why the smartphone theme?

A: It just kind of came, stream of consciousness. One thing led to another. Doing “Hotline Bling,” I called it the “But you caint use my phone” mix, and from there, it just started flowing. The next song I did was “Phone Down,” and I kept going. “Mr. Telephone Man,” then “Hello” from the Isley Brothers, which is the last song. (Andre) 3000 got on there, and it all worked together. By the end of those two weeks, I had a piece that was really nice.

Q: That lyric, “But you caint use my phone” has become so famous.

Q: Yes, the punchline. It’s one of those things that just sticks. Do you get a kick out of that all these years later?

A: You know, I don’t really think about it much. I don’t think about those types of things or consider one thing bigger than the other.

Q: What’s interesting is you’re taking a style of music that’s very prevalent right now on urban radio and you’ve taken it further than just minimal beats. But “Trap & b” certainly has a connotation, one that people might look at you say, “She’d never do that.”

On “Live,” the album “Tyrone” was on, I said, “The atoms in the body rotate at the same rate on the same axis that the Earth rotates, giving us a direct connection with the place we call Earth.” Well, since then the Earth has sped up — the rotation and the vibration. And so are the children who come through. Their ears are calibrated for a certain frequency, digitally and sonically. And as an analog girl who is very mutable and can adapt to the digital world, I also have evolved with that too. I still am me, but it’s like me talking to you on a rotary phone as opposed to Facetime. It’s still me.

Q: This does feel wildly experimental, but wholly you. I can imagine navigating a new space without changing can be difficult.

A: I guess. I don’t really give it that much thought. It’s just what I really feel, what I like.

Q: You recorded this in your living room?

A: We did one song a day. All of those vocals are actually one take. It was fun, easy.

I used tuning forks and singing bowls in the music in post-production, just trying to create some frequencies that felt really good that I always use in all of my works. I wanted to make sure I implanted those things here too.

Q: And that’s not Drake on the record?

A: It’s not Drake. It’s one of my artists named ItsRoutine. He’s on my label, and he can do anything. He sounds like him sometimes. His name is Aubrey as well.

Q: Are you pulling my leg now?

A: No, I’m not. Throughout the campaign, I’m thanking Aubrey for things and (people) think I’m talking to Drake. Which I am on “Hotline Bling.”