All Aboard: Wolfgang Peterson Tackles the Open Sea Once More in Poseidon 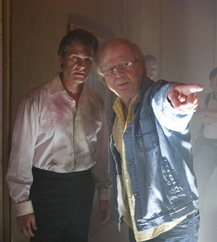 What happens when total strangers have to rely on each other for survival, knowing their last few hours on earth are in the hands of people they barely know?

That's what director Wolfgang Petersen wanted to find out in Poseidon , the third installment of his self-described “water trilogy,” a $140 million remake of the 1972 disaster classic, The Poseidon Adventure , which starred Gene Hackman, Ernest Borgnine, Red Buttons and Shelley Winters.

Poseidon follows the same premise as the original. A cruise ship sailing on New Year's Eve capsizes due to the force of a rogue wave (a tidal wave was the culprit in the original), and a band of strangers must work together in order to find a way out. While Poseidon is a remake, none of original characters are back.

Petersen had already explored how professionals handle extreme water disasters in both Das Boot , with soldiers, and The Perfect Storm , with deep sea fishermen; but Poseidon gave him the opportunity to examine how an ordinary individual would respond.

Petersen's vision for Poseidon and the questions he wanted to explore intrigued many who signed on to the project.

“What I found interesting about the movie … is that the most important four or five hours of your life, in terms of critical survival, may be with people whose names you don't even know. And your life may be very much in their hands. And theirs in yours,” Russell says.

Poseidon , however, is still a summer release that requires a certain amount of action sequences. Petersen thinks the original had a lot of charm, but lacked an intensity that is more possible with today's special effects.

Filming took place mostly underwater as Petersen strove for authenticity, and nearly everyone suffered a cold or worse during the four-month shoot.

“That's what the achievement of the movie is, there's no CGI silliness,” Lucas says. “You're dealing with real people in real situations. It's hard to create that and make it look real unless [actors perform their own stunts].”

“It was really the toughest thing I think I've ever done, movie or otherwise in my life,” adds Rossum, who had to learn to scuba dive and free dive for her role.

Injury and illness among the cast seemed endless. “Kurt Russell got pneumonia, Josh Lucas broke 10 tendons in his right hand, Mia was in the hospital with a concussion, the kid had a concussion. It was a pretty intense shoot. I was pretty much like purple from the neck down with bruises,” Rossum recalls.

Does Petersen enjoy seeing actors put their lives on the line for him?

He added that even when he told the actors the production would be very hard and very tough they still wanted to give him 110 percent. “I think they are very proud now when they see the film that you can see in every single scene it's really them doing it,” he says.

“An audience of today is so used to and frightened by disasters left and right” that it's not easy to “get them a true feeling of what a disaster could be.” The movie, then, “invites an audience to see, come in and be with these people in the safety of the theater,” Petersen says.