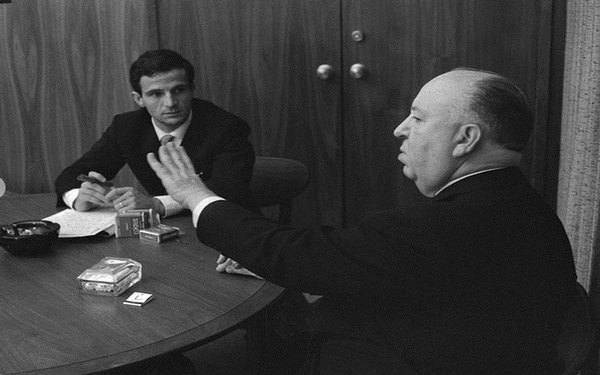 LOS ANGELES — Opinions about film are thick on the ground these days, but intelligent discussion is, as always, at a premium. Which is why it’s such a joy to welcome “Hitchcock/Truffaut” to the screen.

Smart, thoughtful and elegantly done, “Hitchcock/Truffaut” is more than an authoritative look at the careers and interpersonal dynamics of directors Alfred Hitchcock and Francois Truffaut, a pair of unlikely soul mates; it’s also, as director Kent Jones intended, a love letter to film itself, to the value and lure of the cinematic experience.

“Hitchcock/Truffaut” is based on a book of the same name, an unusual collaboration that is generally considered one of the few indispensable works on the movies.

The project began in 1962, when Truffaut, who’d been a critic for the seminal French journal Cahiers du Cinema before he became an acclaimed director, wrote a long letter to Hitchcock suggesting a weeklong interview about his films.

Hitchcock, not known to be a sentimentalist, wrote back that Truffaut’s letter “brought tears to my eyes.” Despite the decades of difference in their ages and experience levels — Truffaut had done three films while Hitchcock was then finishing his 48th, “The Birds,” he readily agreed to a talk that ended up lasting 27 hours.

One reason this interview proved so special was that, as French director Olivier Assayas says, to Truffaut this was no peripheral project, it was “an essential part of his body of work,” something he put as much time and preparation into as one of his films.

The goal of all this, as Jones said when the film debuted at Cannes, was to change America and the world’s perception of Hitchcock.

Still, good as this book is, that it would make an excellent documentary is hardly a foregone conclusion. Working from a script he co-wrote with Serge Toubiana, director Jones — whose previous work includes films on directors Val Lewton and Elia Kazan — has adroitly used a trio of approaches to make that happen.

First, he’s employed a wide selection of well-chosen Hitchcock clips, including but not limited to classic sequences such as the shower scene in “Psycho” (which, we learn, required 70 setups) and the notoriously long kiss in “Notorious” between Ingrid Bergman and Cary Grant. The actors hated it, but, the director frankly told them, “I don’t care how you feel, I only care about what it looks like on screen.”

Jones has also gotten use of the original audio tapes made by Hitchcock, Truffaut and translator Helen Scott for those 1962 interviews, and these voices, especially Hitchcock’s, are unexpectedly effective.

For the veteran director, who seemed to enjoy projecting a droll and disinterested public persona, is revealed in the tone of voice in these recordings to be engaged, passionate and deeply connected to his work. And then there are those tantalizing moments when we hear Hitchcock begin a juicy anecdote only to instruct the technician to “shut the machine off.”

Perhaps unexpectedly, Hitchcock seems especially pleased with what he achieved with “Psycho.” “My main satisfaction,” he says, “was that it was film that did something to an audience. It wasn’t a message, a novel or some great performance. It was pure film.”

Finally, Jones has employed interviews with 10 well-known contemporary directors, thoughtful individuals (they ended up all being men) who are considered and articulate in their responses to both the book and the men who made it.

Three of the filmmakers — Assayas, fellow French director Arnaud Desplechin, and Japan’s Kiyoshi Kurosawa — work overseas while the seven Americans range from expected choices such as Martin Scorsese, Peter Bogdanovich and Paul Schrader to James Gray, Richard Linklater and Wes Anderson, who says his copy of “Hitchcock/Truffaut” is so well used it’s “not even a book anymore, it’s a stack of papers with a rubber band around it.”

Of all the directors who talk about Hitchcock, perhaps the most articulate is a man who might be viewed as his modern successor, David Fincher, who, for instance, describes cinema as editing behavior over time, making moments that should be fast slow and those that should be slow fast.

But, as it should be, the biggest surprises overall are the things this film reveals about Hitchcock himself. “Should I have experimented more with character and narrative?” he wonders in a surprising moment of self-doubt in a letter to Truffaut. “Did I become a prisoner of my own form?” A film that provides questions like this is a welcome film indeed.

For more information at bout this film, visit http://bit.ly/20emmwG