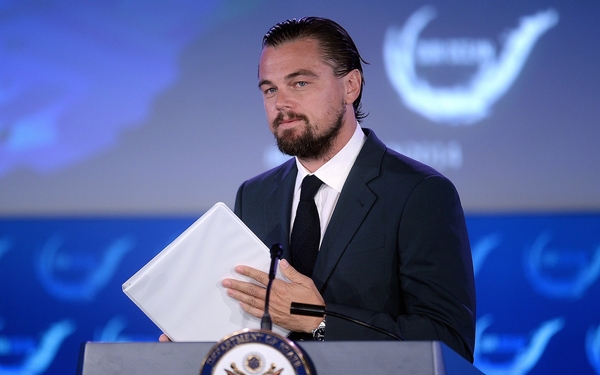 Awards nominations are a regular occurrence for Leonardo DiCaprio, who turns up on prestigious seasonal film lists as often as a hunter returns to the woods.

On Thursday, the Hollywood Foreign Press Association honored DiCaprio with a Golden Globe actor-drama nomination for his role as a wounded fur trapper in “The Revenant,” set and shot largely in the forbidding cold of western Canada. It is the 15th time DiCaprio has been nominated for an acting Globe or Oscar.

This time, though, things are shaping up in some unfamiliar ways.

“Any time you’re recognized it feels good, but especially for a film like this, which has been a different experience,” DiCaprio said in an interview shortly after the nomination. “I’ve made no qualms about saying that making this movie is the hardest thing I’ve ever had to endure.”

That may not be the only reason this go-‘round is different. Though DiCaprio has won an acting Globe in two out of the 10 instances he’s previously been nominated, he has never won an Oscar — not in his four times as an actor nor his one time as a producer. The 41-year-old has been riding an Academy Award cold streak dating back more than two decades; his first nomination, for “What’s Eating Gilbert Grape?,” came in 1994.

To top it off, DiCaprio is associated with one of the famous Oscar snubs of all time — his turn as Jack Dawson in “Titanic” was left off the actor shortlist in 1998.

Yet this could be the year all of that changes. As SAG Awards and Golden Globes pundits focused the last few days on Matt Damon (in for Globes, out for SAG), Mark Ruffalo (in for Globes, but for a different movie than his acclaimed “Spotlight”) and Bryan Cranston (surprisingly in with both groups), DiCaprio has been quietly chugging along. He too was nominated for both a Globe and SAG award.

And he’s emerged as the odds-on favorite to win those prizes, as well as an Oscar for his work in “The Revenant.”

In the visceral Alejandro G. Inarritu film, DiCaprio plays Hugh Glass, a man on the early 19th century American frontier who after a bear attack is left for dead and must find his way to his camp, where he also has unfinished mortal business with a brash fellow trapper named Fitzgerald (Tom Hardy). Fighting for survival and bent on revenge, Glass has a desperation of purpose, and DiCaprio lends the role a primal force.

Those involved with the film describe how the actor would, in subzero temperatures and buried under clothes and beard, act for hours even while nearly motionless and speechless on the ground.

“There was something profound about what he was doing, even lying there still, acting with his eyes and being in sync with the camera at all times,” Inarritu said in an interview.

Awards voters tend to like when charming and gregarious actors take on roles in which speech is a challenge. The trend that has been borne out numerous times in recent years, with winners such as Jean Dujardin in “The Artist,” Colin Firth in “The King’s Speech” and Eddie Redmayne in “The Theory of Everything.”

Glass is (after Dujardin’s turn) the ultimate silent role. “I tried to take as much dialogue out and strip it down to the basics,” DiCaprio said. “For me, the challenge of the movie was, ‘How do you connect to the audience and bring them on a journey with very little words?’”

Voters also tend to take in an entertainer’s entire resume, especially when they’ve been around a long time without winning a statuette. DiCaprio’s frequent collaborator, Martin Scorsese, won his first Oscar for “The Departed” in 2007, 40 years after he began making films. The prize was as seen as much as a career coda as a specific homage.

A long line of actors also falls into this category. Jeff Bridges had, like DiCaprio, struck out four times at the Oscars before winning on his fifth try for “Crazy Heart” in 2010. Al Pacino won an Oscar in 1993 for “Scent of a Woman” after 20 years of nominations and frustrations — about the same length as DiCaprio’s losing streak.

DiCaprio’s dry spell may be in part the result of the choices he’s made The actor has had an anomalous career in modern Hollywood, eschewing the kind of painstaking Method work that often wins Oscars (Daniel Day-Lewis, e.g.) or the swings from big commercial films to small upscale drama that tends to catch voters’ attention.

Instead, DiCaprio has combined the two into a kind of unlikely hybrid — the big upscale commercial drama, you might call it. His last four movies had him playing J. Edgar Hoover (“J. Edgar”), a plantation-owning villain in a Quentin Tarantino movie (“Django Unchained”), Jay Gatsby (“The Great Gatsby”) and rogue trader Jordan Belfort (“The Wolf of Wall Street,” which was the most comedic of the group and notched him a Golden Globe two years ago).

And while he pops up in the tabloids and is known for his environmental activism, DiCaprio rarely seeks the limelight and doesn’t serve as Hollywood’s unofficial diplomat — in contrast to, say, George Clooney, who has two Academy Award statuettes on his mantel.

DiCaprio’s lack of Oscars has now become a fascination in its own right, the stuff of quasi-serious social-media campaigns and blog posts with titles like “Why does the academy hate Leo DiCaprio?”

The actor affects a Zen pose about his long wanderings in the Oscar desert. “The truth is with many of these awards it’s beyond your control,” DiCaprio said in the interview. That may be true, but on Thursday he began to look like he had matters well in hand.