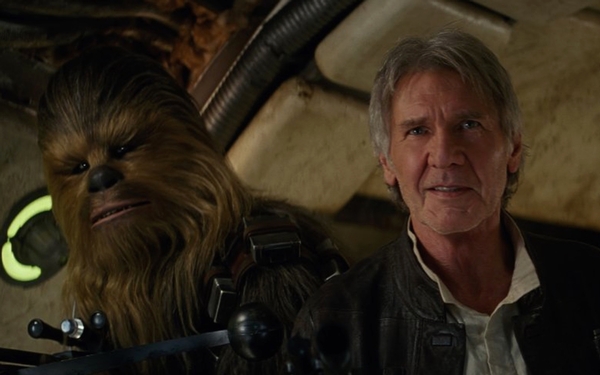 LOS ANGELES — One acting role can change a person’s life forever. Harrison Ford and Carrie Fisher were relatively unknown actors when they signed on to star in George Lucas’ 1977 space western, “Star Wars.”

Ford had landed a few small TV roles over the previous decade before getting a little recognition for his street racing work in “American Graffiti.” Fisher was best known for being the daughter of Eddie Fisher and Debbie Reynolds.

Then they landed the roles of Han Solo and Princess Leia in the film that would launch one of the biggest franchises in the world. The entire cast — including a baby-faced actor named Mark Hamill — became some of the biggest stars in the Hollywood galaxy.

Director J.J. Abrams is using the legendary status of the actors and their famous roles as a bridge to bring longtime “Star Wars” fans to the latest trek in the franchise. Ford, Fisher and Hamill join another cast of relatively unknown actors in Daisy Ridley, Oscar Issac and John Boyega to star in one of the most anticipated moves of the 21st century in “Star Wars: Episode VII: The Force Awakens.”

Ford is delighted to be part of the cast that links the new “Star Wars” movies with the three in which he, Fisher and Hamill starred: “A New Hope,” “The Empire Strikes Back” (1980) and “Return of the Jedi” (1983).

“It’s gratifying to be asked to be part of this,” Ford, 73, says. “There was an interesting story to tell for the character. It’s always nice to anticipate working in something that you know people will have an appetite for. This is not a crap shoot. It’s a big casino.

“And it’s fun to play with these toys again. It’s been a great experience.”

It was a great experience despite an on-set incident that left Ford with a broken leg. Abrams calls that moment one of the worst in his life.

It’s been almost 40 years since Ford and company stepped into their roles. Even with all the passing years, Ford found returning to Han Solo felt very familiar and very much like he was at home.

Part of that comes from the reverence fans have shown for the movies. It’s very pleasing to Ford that not only did his original trilogy become some of the biggest hits in film history but that they are being passed down to other generations.

Fisher has seen the same kind of multi-generational response to the films.

“I find that it really is a family experience,” Fisher, 58, says. “I have had people over the years say, ‘I am showing these films to my child.’ And you watch their children watch the movie and you learn something about your children.

“Will we like the same characters? You see all these pictures of entire families dressed as the characters. I find that so moving. It’s an amazingly emotional movie.”

The first proof that fans were excited that the familiar faces would be back for this next generation of movies came during the “Star Wars Celebration” held in April. The packed house at the Anaheim Convention Center released a roar that could be heard in a galaxy far, far away when Han Solo and Chewbacca emerged from the Millennium Falcon.

Ford’s line in the second “The Force Awakens” trailer (“Chewy, we’re home”) got an even bigger ovation.

The line obviously has a specific meaning for “The Force Awakens,” but it can also be used in very personal terms with the actor. Ford had returned to the role that was named the ninth most iconic character in film history by AMC. Ford’s portrayal of Indiana Jones is sixth on the list.

Why he’s willing to return to these roles is very simple.

“It’s because it’s what I do. It’s what I like to do,” Ford says. “It’s what’s fun for me. I had a chance to work with people that I really admire doing something that I thought was going to be fun and actually turned out to be fun.

“And to get to work with J.J., whose work I have really admired and long known about.”

Fisher’s Leia hasn’t gotten the same kind of attention, but Fisher’s pride in the role comes more from what Princess Leia meant to all of the female fans of the franchise. The sassy, spunky and tough Leia was a big difference from the damsel in distress that had been the norm in the action film genre.

“I am the beginning of ‘girl power.’ I got to be the only girl on the all-boy set,” Fisher says. “What was really fun about doing anything ‘girl power-esque’ was getting to boss the men around.”

Her work as Leia was so strong that Fisher long ago accepted that she will always be known for that role and not her other film work or even as an author. That’s been OK with her because the role is so strong.

Fisher does joke that Leia’s hair was a little strange, especially the cinnamon buns-like hairdo at the start of “A New Hope.”

“The Force Awakens” has been shrouded in a cloak of secrecy, but it’s clear Ford is reprising his role as Han Solo and Fisher is now bumped up to Gen. Leia. How Hamill fits into the story is the movie’s biggest mystery.

Hamill, whose Luke Skywalker also gave him legendary star status, has been conspicuously absent from all news and TV interviews. Any time he has talked, it has been to say that he can’t talk.

At the Star Wars convention, the 63-year-old Hamill did speak about returning to the franchise. But, as has been the case from the moment it was announced that a new film was being made, all comments by Hamill were very generic and offered no clues to his role in the continuation of the saga.

“I have one — just one — simple message,” Hamill said. “That’s a simple ‘thank you.’ If it wasn’t for the fans, we wouldn’t be here. It never ceases to amaze me.

“I am so grateful for your support, your enthusiasm and, yes, your passion. All my adult life, I have felt such love from you. You are more than just fans. You’re family.”

As for his “Star Wars” family, he’s been joined by Peter Mayhew (the man inside the Chewbacca suit) and Anthony Daniels (the actor inside the C-3PO costume). Along with Ford and Fisher, this group has brought their film legend status to what promises to be the beginning of a long series of adventures in the “Star Wars” universe.

Ford’s advice to the new cast members who are just starting along the same legendary track that he, Fisher and Hamill took so many years ago is to be ready “for a big ride.”