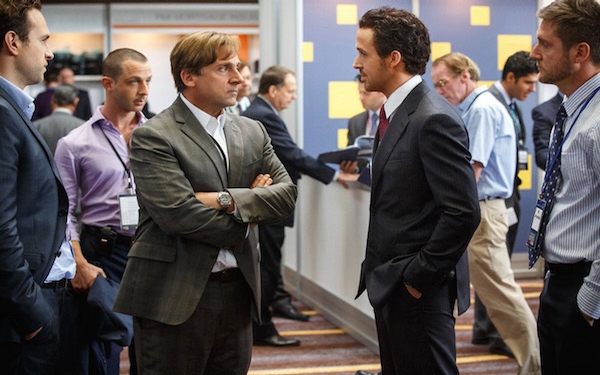 Still of Steve Carell and Ryan Gosling in "The Big Short." (Paramount Pictures)

If you were drawing up a list of possible directors to take on a film about the 2008 financial meltdown, odds are the guy who brought the mustachioed, jazz-flute-playing weatherman Ron Burgundy into the world wouldn’t immediately spring to mind.

So when Adam McKay first set out to bring Michael Lewis’ 2010 nonfiction bestseller “The Big Short: Inside the Doomsday Machine” to the big screen, he figured he’d face an uphill battle.

The story of a handful of Wall Street outsiders who foresaw the looming economic collapse when few others did, Lewis’ book is packed with complex economic arcana about credit default swaps, subprime mortgages and collateralized debt obligations. McKay — whose credits include the Will Ferrell comedies “Talladega Nights,” “Step Brothers” and the “Anchorman” movies — is known for making films with lines such as “I’ll bet his poop smells like sandalwood” and argue at absurd length over who would win in a fight between a lion and a tuna.

“I said, ‘No one is going to let me direct this,’” McKay, who is 47, said on a recent afternoon at a hotel in Los Angeles, wearing owlish glasses and leaning his tall frame back in a chair. “No way.”

And yet not only did McKay manage to get “The Big Short” made by a major studio, Paramount Pictures, with an all-star cast including Steve Carell, Christian Bale, Brad Pitt and Ryan Gosling, but he delivered a film that, since its premiere last month at AFI Fest, has vaulted into the thick of the Oscar race and earned rave reviews for its deft balance of drama, comedy and moral outrage. Suffice to say this is not the kind of outcome the average Wall Street trader would have laid money on.

“The Big Short” is a peculiar animal, particularly in today’s low-risk studio system. Though it has plenty of laughs, its subject matter — the implosion of the American financial system because of greed, corruption and negligence — is deadly serious.

Its protagonists, a group of Wall Street misfits who reaped staggering profits from the collapse of the global economy, are hardly typical Hollywood heroes. The film shifts tones quickly and unexpectedly, from satire to tragedy to outright horror. Explanations of knotty economic principles and Wall Street practices are delivered directly to the camera by celebrities such as Margot Robbie and Selena Gomez.

If that makes the movie difficult to categorize — and tricky to market — McKay is perfectly happy with that. “I think genres are starting to fade away and audiences are getting more and more savvy,” McKay said. “One of my favorite movies is ‘Kung Fu Hustle,’ which is like seven different genres. That’s what I’d like to do: to keep pushing the genre. Can you do a comedy that all of the sudden has a musical number and then gets really scary?”

Lewis, who had considered his book all but unfilmable, can’t quite wrap his head around what McKay managed to pull off. “It’s like Olympic dives,” he said. “The quality of the execution is absolutely superb, but the thing that sets it apart is the degree of difficulty. It’s like a triple backflip with a pike.”

Those who know McKay best, like Carell — who first befriended the writer-director in the 1990s when they were performing in Chicago’s Second City improv troupe — aren’t surprised he was drawn to “The Big Short.” Though he’s known for making some of the silliest, most outrageous — and most financially successful — comedies around, McKay has long harbored a more subversive, punk-rock compulsion to speak truth to power.

“It made perfect sense to me that Adam would be doing this movie,” Carell said. “He’s obviously very funny, but he was also clearly angry and passionate about this story. Even back at Second City, he was always trying to push buttons and to stir the pot.” (In one of the many politically charged skits he performed at Second City, McKay played left-wing linguist Noam Chomsky as a substitute kindergarten teacher freaking out his students by telling them that Thanksgiving was all about the genocide of the Native Americans.)

McKay traces his strongly left-leaning political views to his childhood in Massachusetts and Pennsylvania. “I had a single mom, and we grew up pretty poor,” he explained. “In a way I’m a byproduct of L.B.J.’s Great Society. We were on food stamps. A couple of times my mom had to be on unemployment. I went to public schools that were actually really good. My mom then got a Pell Grant and went back to college. We could have fallen into poverty, but because of that support, my mom was able to get a better job and I was able to go to college. I got to see how that stuff really works.”

While making the 2010 buddy-cop comedy “The Other Guys,” which featured a shady billionaire financier as its villain, McKay became increasingly interested in the economic forces that drive our political system. He read “The Big Short” and immediately saw its potential as a movie.

“It just cooked,” he said. “It was a page turner, and it had these great characters. I liked that there weren’t any clean, cartoony heroes.”

McKay took a pass at the script, which had been written by Charles Randolph, injecting fourth-wall-breaking scenes and creating a narrator to help guide audiences through what he called “the esoterica” of the economics. “I think Paramount was probably just humoring me,” he said. “They wanted an ‘Anchorman 3’ or something else big, and we produce movies for them. So I took a 10th of what I would normally get to write the script — and they liked it.”

Lewis — whose books “The Blind Side” and “Moneyball” were made into successful films — was skeptical that a film of “The Big Short” would be made. “I thought they’d give me some money for it and never make it and that’s fine,” he said. “But when they called me and said Adam McKay was interested, I thought, ‘That’s actually the perfect guy.’ I’ve always thought you can be funny and serious at the same time — in fact, that’s the best way to be serious.”

With the exception of the limited-run Broadway show “You’re Welcome America,” in which Ferrell played George W. Bush and which McKay directed, and the 2012 film “The Campaign,” which he produced, most of his film work has been apolitical. In person, though, he makes no effort to soft-pedal his liberal political opinions, calling the current crop of Republican presidential candidates “clowns.”

That said, McKay sees “The Big Short” as decidedly nonpartisan and hopes that the movie stirs people of all political persuasions, making them think — and making them mad. “Banking is not really a right-left issue — it’s something everyone is frustrated with,” he said. “I’d love it if this movie started catching on at all in the South or the Midwest. That would be my dream response.”

In the wake of “The Big Short,” McKay is looking to strike out in more uncharted directions. “I have another way darker, more dramatic idea I’ve been kicking around,” he said. “I want to make a horror film one day. I just love movies.

“Will and I have been talking about maybe doing one with him and John C. Reilly where they’re two misguided guys who are going to go down and protect our border and stop the Mexicans from coming in,” he said. “Shoot it on film, really make it look amazing, see if you could make this beautiful, relevant movie that also happens to be crazy funny — I would love to do that.”