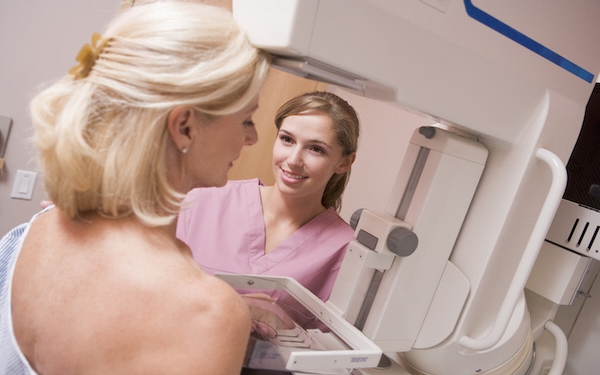 WOmen who have had false-positive results on mammograms may face a greater risk of future breast cancer, according to a new study led by a UNC-Chapel Hill researcher. (Fotolia/TNS)

CHAPEL HILL, N.C. — Women who have had false-positive results on mammograms may face a greater risk of future breast cancer, according to a new study led by a UNC-Chapel Hill researcher.

The findings were published last week in Cancer Epidemiology, Biomarkers & Prevention, which is a journal of the American Association of Cancer Research.

It found that women with a false-positive result who were referred for further imaging had a 39 percent greater chance of developing breast cancer within 10 years, compared with women who had a true negative mammogram. For women who were told to get biopsies after false-positive readings, the increased risk was 76 percent during the subsequent 10-year period.

In the United States, 67 percent of women over 40 undergo screening mammography every year or two. If a radiologist spots suspicious tissue, a patient will be referred for further imaging or a biopsy, depending on the level of concern.

False-positive readings on mammograms are fairly common, said the study’s lead researcher, Louise Henderson, assistant professor of radiology at the UNC School of Medicine and researcher at the UNC Lineberger Comprehensive Cancer Center.

“For women, we recognize that any increase in risk is worrisome for them, but we don’t want women to be overtly concerned, because the absolute risk is actually fairly small,” Henderson said.

She said women should talk to their physicians if they have a false-positive result and also consider other risk factors they may have.

There are many risk factors for breast cancer, and some, such as genetic mutations, are strong predictors. Other risks include a woman’s age and the density of her breasts.

While women with more dense breasts face a higher risk of breast cancer in general, density did not affect the relationship between false-positive mammograms and subsequent cancer diagnoses for most women. Breast density can affect the readability of mammograms.

Henderson said the study’s findings suggest that radiologists who read mammograms may notice abnormalities that, while not cancerous, may be markers for future cancer. The study did not include an analysis of the locations of tumors compared to initial problems spotted on mammograms.

Henderson and her colleagues analyzed data from the Breast Cancer Surveillance Consortium from 1994 to 2009. The data came from seven registries in the United States, including the Carolina Mammography Registry, which draws information from mammography centers across North Carolina.

The researchers tracked women in the study for 10 years. During the period, 48,735 women were diagnosed with breast cancer.

Understanding the data around mammograms may in the future help scientists design optimal prevention and screening techniques for individuals.

“Our ultimate goal is to hopefully take information like this and use it in things like risk-prediction models to help women get a sense of, ‘What does it really mean for me?’ ” Henderson said.