Looking for the future of tech 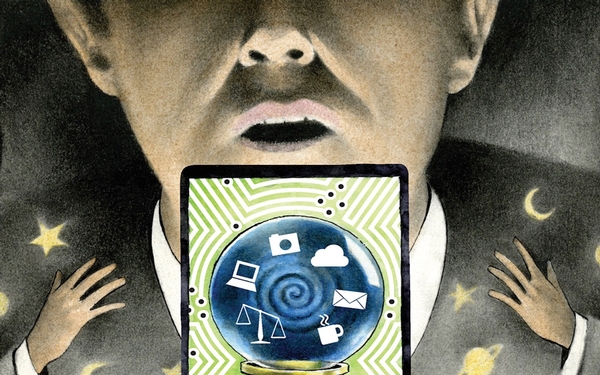 SAN FRANCISCO — We are increasingly joined at the hip to technology. For most of us, it’s at its most obvious in that smartphone in our pocket or purse, stringing a live wire between our daily lives and the cloud, coursing through a full menu of apps that connect us to the Internet and to each other.

But, of course, the technology is all around us, increasingly woven intricately into our bedrooms, work cubicles and cars. Virtual reality sports, driverless cars, drone deliveries, algorithms that write poetry — it’s getting more Jetson-like each passing week.

The future’s happening so quickly that I wanted to get a glimpse of its trajectory, an idea of where all these personal-tech gadgets and Internet-of-Things conduits are leading us. I wanted to see what kind of world awaits us when we get there, all strapped in and ready to indulge it all, while our microwaves talk to our refrigerators behind our backs.

When I saw a notice for Fusion’s Real Future Fair in San Francisco last month, I decided to drop by.

And there it was, right in front of my eyes: the future.

And it was carefully curated by leading-edge futurists, gathered together to imagine what might lay in store for us in each of their areas of expertise, from the law to health to food to gaming. It was a full day of panels, starring real live humans, but accompanied along the way by on-site robots, interactive displays, and virtual-reality headsets.

“This space,” emcee and Fusion’s Silicon Valley bureau chief Alexis Madrigal said of the Palace of Fine Arts, “was created 100 years ago, and we wanted to have this event in a place where they once envisioned what the future might look like. Today we’ll talk about how cultural change is as important as technological change, because as the tech advances, it happens in the grooves of the culture.”

Hosted by Fusion, a multi-platform media company owned by Disney-ABC and Univision Communications, the conference was coordinated by Fusion’s Oakland office and jam-packed with the cognoscenti of the great unknown, a future coming at us at an ever-increasing velocity.

I spent a good part of my day sitting there, jaw dropped, almost disbelieving some of the predictions being offered by the panelists. Here are three of the areas that most interested me:

THE FUTURE OF STORYTELLING

Madrigal’s guest, Facebook’s head of product design Julie Zhuo, was a fitting choice, perched as she is over the intersection of social-media and narrative. As Facebook’s mighty News Feed river flows ever-forward with personal confessions, adventure tales and dispatches from life’s front lines, the ongoing global conversation, she said, “has inspired all of us at Facebook to democratize storytelling so that users can tell their stories to more people than ever before.”

That storytelling “will continue to evolve in the future,” said Zhuo, whether it’s “the shorter and quicker stories people send from their phones versus those they send from their computers,” or the stories “that shift back and forth between text and images, thanks to these amazing camera we all have in our pockets now.”

Some themes she sees ahead: content will become more immediate and live; more sophisticated apps and other tools will enable digital storytellers “to move from text to photo to video to 360-degree immersive video over the next three-to-five years. And we’ll see prices decrease for things like” virtual-reality cameras and viewers “that will allow people to share the actual environment they are in at any given moment.”

Takeaway: While I see this evolution of shared narratives and collective storytelling not just on sites like Facebook but in the scores of “citizen journalism” blogs that impact what I do for a living, I have trouble seeing it all morph into something fundamentally different. Storytelling, it seems to me, will always remain at its core a deeply personal endeavor, one likely to remain that way despite the software advances of Facebook et al.

THE FUTURE OF LAW

When we’re not out there chewing the digital fat and sharing photos 24-7, citizens of 2025 could well be driving autonomous vehicles while reading fiction created by robots — and getting in trouble with the law. Imagining such hypothetical cases were red meat to the three experts: lawyer and technologist Tim Hwang; attorney and Northeastern University professor Andrea Matwyshyn; and Parker Higgins, the high-energy Director of Copyright Activism at the Electronic Frontier Foundation.

The first scenario involved a pizza, delivered by a driver in a self-driven car, which went over the speed limit and hit someone en route; such are the legal dilemmas coming down the pike.

“Legally, it’s simple,” Hwang began. “Control rests in the hands of the manufacturer, so it’s the manufacturer of the car that’s to blame. Then again, the manufacturer has probably signed an agreement that distributes fault to the driver. But if the driver isn’t really driving the car, it’s unclear who’s at fault.”

Matwyshyn begged to differ: “I’d expect the pizza company to assume responsibility for everything. The car is essentially acting as agent of the pizza company so anything bad that happens is attributable to them.”

The discussion went round and round. In the end, the panel agreed on one thing, as Higgins put it: “The person hit will sue everybody; that’s the first rule of litigation.”

Takeaway: This one fascinated me; I can’t wait to see what new and novel legal battles emerge from these tech changes, including a case where a robot sues another robot for stealing content that the defendant robot had already stolen from a human author.

THE FUTURE OF FOOD

This one was squeezed in between the Future of Gaming and the Future of Sex & Health, conveniently timed for the end of our lunch. Sarah Smith with the Institute for the Future was the host, doing exactly what her online resume says she does: explores “how emerging technologies and social practices will change the way people and communities seek and create well-being.”

“Digital data and food are merging,” she said, adding that “food and tech are no strangers — just ask your refrigerator.”

Then she was off to the races: imagining a new take on airplane food in 2025, “where you’ll select a virtual-reality meal, put on a headset, select something like Beach Mode, and the food will look awesome.”

She’s not kidding. “Marriott,” said Smith, “already offers VR headsets to transport guests to different places. Airbus, too, has patented VR helmets” for airline passengers. “Hearing the ocean, for example, has been shown to increase people’s experience of eating seafood,” said Smith. “In the future, we’ll be able to do things like digitally season our food with our iPhone, or select a scent, plug in a pod to your phone, and smell beef while you eat rice which will make your rice tastes like beef.”

Takeaway: I’ll never think about food the same way again as I mull the idea of virtual-reality-seasoned airplane food.