Say hello to the future cord-cutters of America 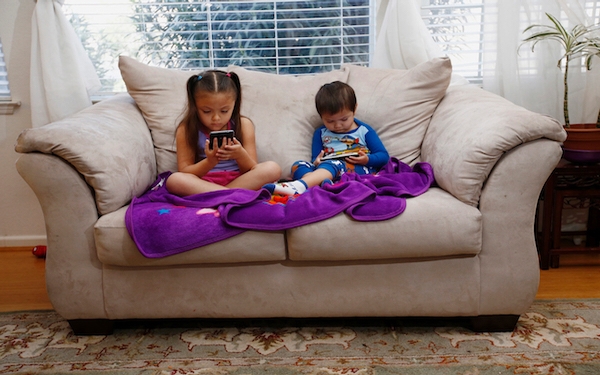 SAN DIEGO — On weekdays in the Larsen household, Kirsten, 12, and Soren, 15, get up early and park themselves on the couch before school. But they do not turn on the TV. Instead, the youngsters each pull out their respective phones and fire up YouTube to get a dose of videos, essentially acquiring the information they need to know before encountering peers.

Say hello to the future cord-cutters of America. Not only is cable becoming increasingly unnecessary to them, but so, too, is the actual TV set.

In fact, the societal transference of TV viewing habits, from over-the-air to over-the-top, is most evidenced in how tots, tweens and teens consume content: using phones and tablets to access the Internet-based providers of their liking — no television necessary — with YouTube and Netflix consistently emerging as standouts.

“The shift away from traditional broadcast cable TV services, that’s been happening for years, but now we’ve hit critical mass,” said Terence Burke, the vice president of research for the kid-focused market research company KidSay. “Kids still watch TV. They still head to Disney and Nickelodeon, just in much smaller numbers and for much shorter durations.”

Burke, who spends much of his time in elementary, middle and high schools for ethnographic purposes, believes there is a massive movement underway in 2015 with kids’ attention diverting away from cable TV. The new normal is digital video consumed on handheld devices.

Smarty Pants, a market research firm that conducts an annual study on the digital behavior of kids ages 6 to 12, found that 81 percent of 6- to 8-year-olds and 76 percent of 9- to 12-year-olds use YouTube.

Netflix, meanwhile, is used by an identical percentage of the older set. A large chunk of the younger 6- to 8-year-olds, or 71 percent, are also Netflix users, according to the firm’s, “2015 Clicks, Taps & Swipes Report,” which was fielded between June and August with a nationally representative panel of kids and their parents.

With an endless selection of videos that are funny, irreverent and even educational, YouTube is not only the new stand-in for traditional cable TV when it comes to kids, but it’s also their go-to search engine. And, as kids get older, Netflix satisfies tweens’ emerging cravings for more serial material. Both video services win with kids because there is always something to watch, and all that’s required is a click of button on their favorite devices.

To court kids and, more importantly their parents, YouTube, Netflix and even Amazon have all created special spaces just for kids. Those family-friendly zones do well with preschoolers and kindergartners, but older kids want the real deal.

“In order to use YouTube, kids should be 13, but the reality is that 8-year-olds are on YouTube all the time,” Burke said. “How are you going to keep them on YouTube Kids when they’ve seen YouTube? You’re not.”

That, in part, explains the existence of YouTube Red, the digital video service’s new $10-per-month subscription option that removes all ads, allows for offline viewing, lets users watch clips while they’re using other apps, and will eventually come with original shows and movies featuring YouTube stars. The company has already successfully, perhaps unintentionally, hooked kids while they’re young. Why not create a way for these future cord-cutters to pay for more of what they clearly love?

In fact, YouTube ranks as the most-used smartphone app, favorite app and top website for both tween boys and girls ages 8 through 11, according to KidSay’s trend-tracker, which surveys 1,000 kids five times per year. And when asked to pick how they would watch shows if only allowed a single choice, 30 percent of pre-teen boys opted for YouTube, slightly edging out all other options, including regular TV and other streaming services, according to the survey.

Boys’ favorite YouTube channels, which include “JackSepticEye,” “PewDiePie” and “Stampylonghead,” sound more like ridiculous, cartoon characters than important entertainment brands. Yet, these channels make up an important subculture on YouTube, one that has turned video game commentators and comedians into bona fide celebrities.

“They love YouTube,” said Gabriela Dow of her two sons, Alec, 8, and Evan, 10, who are avid viewers of another hit channel, “PopularMMOs,” which regularly puts out Minecraft videos and has more than 6.2 million subscribers. “YouTube is definitely their favorite.”

Young girls have slightly different tastes, but new still outranks the old when it comes to personal viewing preferences. KidSay’s survey found that 33 percent of tweenage girls picked streaming services such as Netflix, Hulu and Amazon Video as their first choice (over regular TV and YouTube) for watching shows.

YouTube is, of course, still very much a winner with young girls.

Susan Polizzotto’s daughters Rachel, 9, and Lauren, 11, watch a variety of YouTube channels using their own iPad mini tablets. The kids watch Stampy’s Minecraft videos, check out clips on how to paint nails or style hair, and follow a cooking challenge show.

Their behaviors align with those of other pre-teen girls, a bunch that also named the family video blogs (vlogs) “Shaytards” and “Bratayleys” among their favorite channels in the KidSay survey. The vlogs are reality series-like YouTube shows, but created by real families with their real kids featured prominently. For young girls, the appeal is an intimacy and a connection to the family that feels more real to them than what’s on TV, Burke said.

Hastening the transition away from cable is the growing prevalence of smartphones, which are now commonplace among teens.

Fully 88 percent of American teens ages 13 to 17 have or have access to a mobile phone, and 73 percent of teens have smartphones, according to the Pew Research Center. But even tweens are increasingly getting access to their own devices.

“Once kids are tweens, they act like teens, and once they get a phone of their own phone, they’re glued to it,” said Wynee Tyree, the founder of Smarty Pants. Some kids as young as 8 are getting their own phones, she said, and “most have their own phone by the time they’re 12.”

If not phones, then tablets. And no matter the device, YouTube and TV are one and the same.

“Overall, kids love YouTube,” said Tyree. “It’s actually one of the very first platforms that they enter the media world through. Kids as young as 1 are starting to tap and bang on the screen to get the content they want.”

From childhood through high school, YouTube serves as kids’ go-to resource for everything, she said. They love watching products being unboxed, enjoy tuning into videos made by their peers and even use the service for homework help. Netflix, meanwhile, has a family friendliness to it that makes parents, who are footing the bill, feel safe.

But unlike their parents who cut ties with their cable companies out of principle or to save money, kids’ digital viewing behaviors are far more instinctive than intentional. And in a trend that has far-reaching consequences for the future of television, kids are not all tied to the television set. Instead, they prefer screens on phones and tablets that they can more easily manipulate and control.

TV viewing on actual TV sets continues to drop, from 73 percent of kids in 2014 to 68 percent this year, according to the Smarty Pants report.

“They don’t want to watch anything on the TV, despite the fact that we have all the shows accessible on the big screen through the Chromecast,” said Scripps Ranch resident Liz Philips of her two sons Sutton, 7, and Greyson, 10.

The same holds true in the Larsen home, where the children have the option of watching YouTube on the big-screen TV — but don’t use it.

The Kuder kids, Jack, 10, and Ashley, 14, also enjoy an entertainment diet that doesn’t include an actual TV.

“It’s always been that way,” said their father, Ryan Kuder. “Since they’ve been big kids, the TV has certainly not been a big part of their entertainment experience at home.”

While mom and dad hang out in the den of the family’s home with the old-fashioned TV, the kids pick up a tablet, or a smartphone, go in another room, and tune into YouTube. Ashley, who has her own iPhone 5, may opt for Netflix, if in the mood for more produced material.

“Kids are finding (channels) because they now have the devices and connectivity to get all that they’re looking for, at the time and place they want,” KidSay’s Burke said.

Often that even translates to the use of several devices at the same time. The Philips’ boys are, for the instance, the ultimate multi-taskers. Typically, the kids are simultaneously watching YouTube on an iPad, playing Minecraft on a computer and looking up other things on a Chromebook.

“At first I did not like it, but that’s how I experience TV, too,” Philips said.

Perhaps that best encapsulates why kids are turning away from the traditional TV set. Thanks to YouTube and Netflix, and access to their own mobile devices, TV as they know it (and want it) is anything but a passive experience.