Joshua Tree’s peaceful, easy allure has for decades lured artists, musicians and the pure of heart 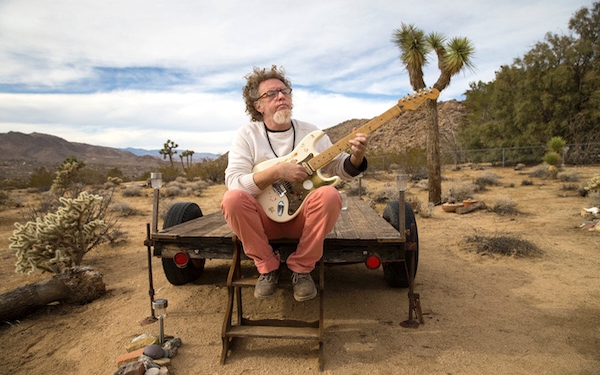 JOSHUA TREE, Calif. — Robbi Robb sipped tea as the desert woke cold and scoured. It had been a while since his band toured with Pearl Jam, and he spent days writing songs at Rimrock Ranch. He was a sort of refugee then, a guitarist who fled South Africa and later Hollywood to build a home amid the rustle of sage and the flash of bobcats.

The sun loosened the chill on his porch, and the conversation drifted from quantum physics to UFOs to punk rock to Buddhism and to what Robb describes as “people using banjos in weird ways. A lot of psychedelic Americana going on.” His own music has become more astral and ambient; not long ago he stared at the stars and jammed with his band near an abandoned car on a hill.

“What do you sing about when you’re looking at the Milky Way?” he said. “There are no words. A lot of the structures of the past start losing their grip on you in the desert. You discover your own voice.”

Joshua Tree has long attracted mystics, artists, writers, musicians and those chasing the legend of Gram Parsons, a charismatic alchemist of country and rock music who overdosed here in 1973. Desert music contains multitudes, from the heavy metal and stoner rock in the lower region around Palm Desert to the alternative, folk, blues and wiry riffs emanating from the hills and outcroppings in the upper desert of Joshua Tree.

The deep bonds between musicians, producers and songwriters resonated last month when terrorists attacked a Paris concert by the Eagles of Death Metal, a Palm Desert-based band that records at the Rancho de la Luna studio in Joshua Tree. The group’s merchandise manager and three members of its label were among the 89 killed at the Bataclan nightclub.

“It doesn’t really touch home until it touches home,” said Gene Evaro Jr., a fifth-generation musician who dabbles in folk, funk and the avant garde. “They’re your neighbors.”

That sentiment echoed across dirt roads and dry river beds. It is a landscape of cheap rents and rustic freedoms, where the iconoclast is roused, the songwriter soothed and bands can play loud across the expanses without the cops showing up. A defiance by many artists and environmentalists to keep out developers, golf courses and chain stores lends Joshua Tree the air of an outpost.

Tracking down musicians leads one to a handful of places including the Beatnik Lounge; open mic sessions at Pappy & Harriet’s roadhouse in nearby Pioneertown; a vinyl record store across the border in Yucca Valley; and Bobby Furst’s gallery, a collection of silver quonset huts that rise from the scrub like a waylaid spaceship.

His long, dark hair aglow in the sun, Evaro sat at Furst’s place, which to the untrained eye resembled a junkman’s paradise, a tangle of metal, tin and rust welded into art by a man with a creased face, an Afghan-style hat and peace sign earring. Furst roamed the grounds tinkering and tending to musicians, including Annachristie, a Philadelphia transplant who sang a cappella and cooked kale and bacon on a hot plate.

“My goal here is to build an art compound,” said Furst, a photographer, carpenter and assemblage artist who years ago sold his 830-square-foot Los Angeles home for more than $600,000 and moved to Joshua Tree in a quest for space. “More people are coming, but it’s changing for the better. The immigrants are artists, writers, inventors, musicians and activists.”

By early afternoon Furst was joined by Evaro, Robb and other musicians: Clive Wright, a member of Cock Robin who these days composes ambient music; Myshkin, a singer-songwriter who arrived two years ago from Oregon; and Bill Maresh, a pedal steel guitarist who has recorded with Dwight Yoakum and the late Johnny Cash. Their ranks will grow in April when musicians from the Coachella Valley Music and Arts Festival in Indio explore the region.

“The attraction for me is physical. There’s a lot of open space and clean air,” said Maresh, who between gigs teaches guitar and banjo lessons to get by. “It’s hard to make a living. It takes a special breed. The desert weeds people out. The stories of Gram Parsons hiking out in the [national] park still resonate. It’s probably the seed of why musicians started coming.”

The folklore is rich, and conversations can slip from cattle rustlers of years past to when Parsons’ road manager drove the singer’s coffin into the desert and set it on fire. Many here speak in wonder of night skies flung with stars and how the winds can shake your car and water your eyes. Dust whirls in spirals and there are more than a few tales about acid, mushrooms and psychedelic escapes.

Mick Jagger and Keith Richards were said to be enjoying the view one day when a drunken, loud Jim Morrison arrived and spoiled the serenity radiating from the amber stones and yucca plants. Today, the drug of choice is marijuana except in the rougher edges of the lower desert, which is known for hard partying and bands such as Kyuss and Queens of the Stone Age, whose co-founder Josh Homme is also a member of Eagles of Death Metal.

“I know the lower desert is famous for stoner rock, but the younger generation is changing and things are diversifying,” Evaro said. “The upper desert is a really cool breeding ground for people to be creative. There’s no pressure to do a certain thing. Some are even recording on analog and making old-style films. They’re starting to fall in love with what their grandmother was once connected to. Young people today are more conscious of the larger world.”

Ted Quinn was one of the earlier ones to arrive in Joshua Tree. A child actor who had parts in “Bonanza,” “Bewitched” and a 1970s Orson Welles film about warlocks, Quinn, a candle flame of a man with a nurturing spirit, arrived in the early 1990s when the late Fred Drake and Dave Catching, a guitarist for the Eagles of Death Metal, started work on the Rancho de la Luna studio.

“I had to get out of Los Angeles,” said Quinn, a poetic songwriter who describes his sound as a cowboy waltz vibe meshing with tinklings of sci-fi. “The music scene here is the sons of the pioneers meet Ed Wood. We get a lot of world-class musicians but it’s a sweet, humble and honest place. I feel lucky to have found a certain niche.”

Quinn spends afternoons at the Beatnik Lounge, which serves up experimental music, sells vintage jewelry and holds classes for Tibetan meditation groups. He founded Radio Free Joshua Tree, streaming songs by musicians who live in or have passed through the desert. On open mic nights at Pappy & Harriet’s, he encourages young talent, such as the Castagne’s, a brother-sister punk band with influences from Kurt Cobain and Jimmy Hendrix.

“Everyone fell in love with them,” he said. “Their mom drove them down from Montreal and they lived in a trailer while they recorded an album.”

Past the highway, up a rutted road that meandered toward the national park, Robb sat on his porch, sipping tea in bare feet and ripped jeans. The sage and cholla trees stood still amid the boulders. Ravens circled against the sun; the cold air slipped to tender. Robb breathed in the scent of rosemary and looked to the hard blue horizon.

“How do you touch this with music?” he said.

He has been working on an album about a Celtic woman and a Viking who live in parallel universes but their longing for one another creates a wormhole in space and time. “I’ve been on it five years,” he said. His ambient band, 3rd Ear Experience, is the latest incarnation in a career that began in his native South Africa, where he wrote anti-Apartheid protest songs. He sought political asylum in the U.S. in 1986.

“They flew me to Hollywood, and it was a nightmare,” said Robb, who recently returned from a European tour. “I met someone who said you should probably go to the desert and start there.”

He will likely stay with what he calls these “crazy and beautiful people” and “magical old ladies” who know about shamans, Native American dancing and cello players.

“A lot of musicians are discovering their voices here,” he said. “They leave L.A. and get the music business out of their bodies. There’s a lot more experimentation, a lot more jamming in the desert. When you’re out here, there’s no point in copying anything.”