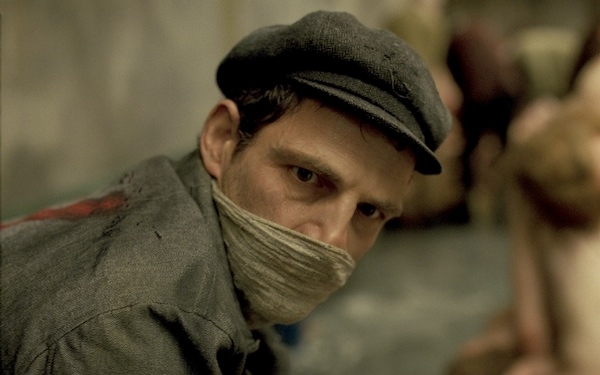 I like to think of Son of Saul as a windowsill. The window itself contains the familiar images of tragedy that The Holocaust often conjures, with all the conventions of unimaginable terror and heartache that come with it. The windowsill, however, is the place where figures stand, unsure of their placement within, marching back forth with little aim but to march. That’s a precarious place to find yourself, certainly, but also precisely why László Nemes first feature sticks. Saul doesn’t know how to step inside, so he creates his own world on the windowsill, a world that makes sense only to Saul.

I know, I know. It’s another Holocaust movie, which is bound to break all of our hearts and tickle our morbid fantasies of a time that seems too bizarre to be real. And sure, Son of Saul embraces that same fascination. What it also contains, however, is the power to focus, not on what we have already come to understand, or think we understand, but how one man in Auschwitz-Berkinau can find purpose in a purposeless world.

It may seem immediately barbaric for Nemes to throw us into the central infernal hell of not only the most infamous concentration camp of WWII, but also the gas chambers at the center of it all. And it is. This, you see, is where Saul (Géza Röhrig) works. He is a part of the Sonderkommando, a faction of workers in Auschwitz that was solely dedicated to the disposing of the remains of fellow Jews that are transported through the gates. They are kept away entirely from the rest of the camp, and they are only meant to last in that position for months before they are to meet a similar fate. So, who is Saul? He’s just another prisoner—another prisoner with nothing to live for… until he hears a single cough in the carnage of the chamber. It’s a young boy who managed to live through the terror and pain of the poison, only to be suffocated by a doctor who wants to open him up to find out why he should live when everyone else dies. What Saul sees, however, is a son that deserves a proper Jewish burial instead of an autopsy at the hands of curious monsters. And so, he begins his search for a rabbi in the pits of hell.

From the very first frame when Röhrig comes out of the blur of the background and into the forefront of cinematographer Mátyás Erdély’s camera, we can understand that this is about him, not what’s around him. The mayhem, the frenzy, the carnage is not of interest to Nemes or our gaze. Using an almost square aspect ratio and filling most of that space with Röhrig’s face, we are only left to ponder at his weight of expression. As he hunts for a spiritual man to help him send just one boy off into the afterlife with an ounce of respect, he traverses through fire, smoke, gas, and water, with thousands of others living and dying in the breath around him, yet still, we never leave him, for Saul is our man. But he is not a hero.

An unmistakably smart move on Nemes’ part, primarily as a writer, was to create a character with a goal that is largely unconcerned with his own well being. The simple fact that Saul becomes obsessed with finding a rabbi in the most unimaginably dangerous scenario completely negates the significance of his or other prisoners’ survival. He constantly puts himself in the line of fire for a boy that has already lost his life. And yet, that’s the only thing that gives him the power to put one foot in front of the other. He has found a purpose like that of which he has not found in the despair of the camps’ shadows. His fellow prisoners call him a fool, and maybe he is, for putting everyone’s lives at stake, but he is a fool who has a will set apart from his own life. And that makes him the most viable candidate to take up Nemes’ screen.

Enough of that, I need to talk about Röhrig himself. It is important that we acknowledge that it is not apathy that Saul embodies, but a redirected set of emotion. Perhaps he has cut off feeling in terms of the people he locks behind gas chamber doors, but it is in the idea of the boy that stirs something overwhelmingly powerful within. Röhrig, who has not acted since his twenties, contains a remarkable capacity to hold moments, looks, and heartbeats that contain nothing and everything all at once. The mechanism of posture and facial expression is mindfully solemn and withdrawn, and yet, wildly immersed in thought and execution. We rarely get to follow his gaze, only his person, as he seeks to reclaim a sense of personhood by burying a boy a he doesn’t know, and is yet his son.

This is the world of Saul’s windowsill. He doesn’t need whatever’s through the window. Everything is right here sitting alongside him, dangling their feet over the edge waiting for someone to invite them in or push them off. And we wait with them.