By Katy Murphy and Sharon Noguchi 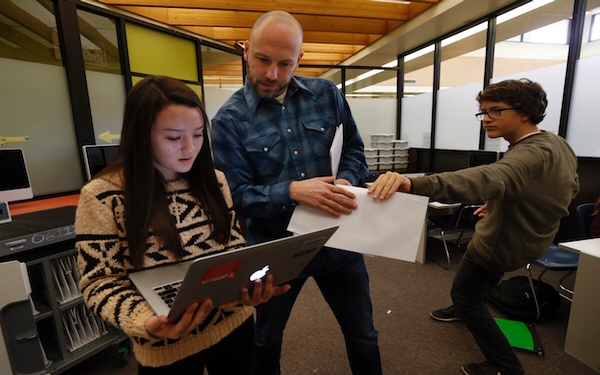 SAN JOSE, Calif. — It’s the backbone of Silicon Valley’s world-changing tech industry, but — like journalism and geography — computer science is considered just another high school elective by the University of California.

They say elevating computer science would encourage more California high schools to offer it — and more students to sign up, preparing them to enter fields with few women and minorities.

“So many students have asked me if they get science credit for computer science, and when I respond ‘No,’ they just give me a puzzled look,” said John Old, a computer science teacher at Willow Glen High in San Jose. “If I could say that you can take this class instead of a traditional math class, we would have off-the-charts enrollment.”

But so far, the faculty committee that sets the so-called “a to g” course requirements for admission to UC and California State University has been reluctant to make any sweeping changes that it feels would not advance students’ mathematical preparation for college.

Even AP Computer Science, submitted for UC’s consideration last year by the College Board, was denied a spot in the math category. A computer science course heavy on coding, UC’s policy says, is simply not mathematical enough to count as math.

“If the goal is to promote computing and to have more coding courses — and I agree with that — there are other ways to do that” besides changing the math requirement, said UC Davis Professor Ralph Aldredge, who heads UC’s Board of Admissions and Relations with Schools. Aldredge noted that some new high school algebra courses incorporate computer science principles, an approach he hopes more high schools will adopt.

Unless a computer science course builds on basic mathematical concepts learned in algebra and geometry, it should be classified as an elective, he said.

UC stresses that it is possible for computer science to meet the rigorous standards for a math course, but only 11 of the more than 1,500 classes offered this year in California high schools made the grade, according to information provided by the UC Office of the President.

Last week, Lt. Gov. Gavin Newsom urged UC to reconsider its position in a letter signed by a long list of student leaders and top executives at LinkedIn, Facebook, Microsoft and other major companies.

They and others argue that UC should broaden its concept of math. “My kids learn how the Internet works from the ground up; they learn how to program. It’s mathematical thinking,” said Karen Hardy, a computer science teacher at Wilcox High in Santa Clara.

Like many others, Hardy believes UC’s stance is holding back California schools. “I feel like we’re in the Dark Ages,” she said.

For the hard-core coders like Logan Saso, recognizing computer science classes as a math credit wouldn’t necessarily help, the Willow Glen High senior said. He took AP computer science as a junior and said it wasn’t very math-focused. Computer science professors at the colleges he is focused on told him to load up on math.

“A lot of them said to take statistics for senior year,” Saso said. “Our world is very much about big data and data analytics.”

In the long run, perhaps UC should consider creating another category of courses that includes engineering and computer science, said Debra Richardson, founding dean of UC Irvine’s School of Information and Computer Sciences and chairwoman of the alliance. “It may be just as important for students to be conversant in computer science as in algebra. So many things rely on computers now.”

Richardson also said she would expect a more diverse group of students to enroll in computer science if it counted for something besides an elective. She pointed to data from the College Board showing that just one in four students who took the AP computer science exam in California this year were girls, 11 percent were Latino and 1.7 percent were black. More than half of the juniors and seniors in California’s public schools are Latino, and more than 6 percent are black.

In the past year, Oakland’s public schools have quadrupled the number of high school students taking a computer science class, from 2 percent to 9 percent, and plan to add classes at elementary and middle schools, said Claire Shorall, who manages the district’s computer science education programs.

Shorall teaches a class at Castlemont High School in Oakland, where students are mostly black and Latino — groups severely underrepresented in the tech sector. One of her students said she didn’t know what computer science was before she was encouraged to sign up as a freshman; now she is in her second course and is planning to study it in college.

“I like being able to use my own creativity and intelligence to solve the problem because there isn’t only one way to solve it, there’s many different ways,” said Lauren Galang, 16. “It gets us thinking. It opens up our minds. It wakes us up in the morning.”

Still, Shorall said, many districts don’t give students such opportunities — and they can get away with it, she said, because of UC’s policy.

“It’s heartbreaking to see a student forced to choose between CS, which would be foundational to her career, and the courses required for college,” it says. “No student should have to make such a choice.”