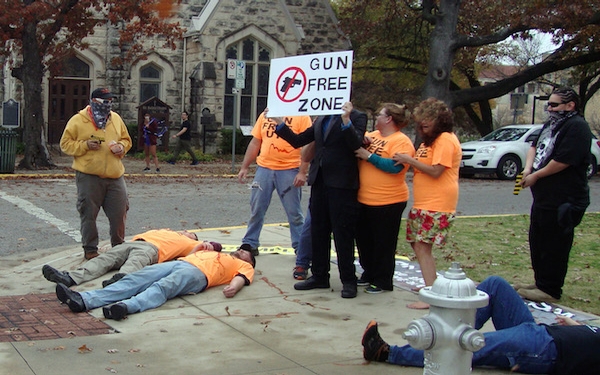 A mock shooting by gun rights activists outside the University of Texas in Austin, Texas.

AUSTIN, Texas — A half-dozen bodies wearing “Gun Free UT” T-shirts lay strewn across a street corner next to a dorm Saturday, splattered with what looked like blood after two men appeared to rush up and attack.

“Don’t let this happen to your loved ones,” announced Murdoch Pizgatti, cofounder of Come and Take It Texas and DontComply.com, who stood holding a megaphone nearby. “Dismantle the death zones.”

The mock mass shooting was staged by Pizgatti and a dozen other gun-rights supporters beside the University of Texas, as police looked on, to demonstrate why they oppose gun-free zones at schools and other sites. They had originally planned to hold the event on campus but shifted to adjacent sidewalks after public outcry last week.

More than half a dozen of the activists showed up armed with loaded assault-style rifles and proceeded up the campus’ main drag before trading their weapons for cardboard cutouts that looked like handguns for the mock shooting.

Organizers said they began planning the gathering more than a month ago, before the mass shooting in San Bernardino, Calif., and did not see going forward with their event as insensitive.

“Your rights are your rights, whether someone agrees with them or not,” said Jason Orsek, 38, of Austin, a financial adviser who played one of the attackers in the mock shooting.

Phil Neumann, 39, drove from the Dallas area to play a victim of the mock shooting because “gun-free zones are killing zones and leave people helpless.”

As Neumann walked with the group toting signs that said “End gun free zones” and “10 minutes versus 10 seconds,”

Klinzing, 21, shook his head. He is not averse to guns, which were common around San Antonio where he grew up, but he doesn’t think arming people will stop mass shootings.

“People have a vigilante complex and think they can shoot their way out of a situation,” he said, calling Saturday’s gathering “in incredibly poor taste, especially given the history of mass shootings on this campus.”

The gun rights supporters walked in the shadow of the campus clock tower where, in 1966, Marine sniper Charles Whitman killed 14 people and wounded 32 in one of the country’s deadliest mass shootings.

Earlier this year, Texas lawmakers passed so-called campus-carry legislation allowing people to carry concealed handguns on college campuses. The law takes effect in August, and although some private universities have already announced plans to remain gun-free, UT Austin officials are still deciding how to respond. Last week, a campus working group recommended that guns be allowed in classrooms, to the delight of campus-carry advocates, some of whom opposed the mock mass shooting, saying it could further polarize the campus.

On Saturday, counter-protesters showed up after the event with signs that said “Mock shootings mock victims” and called the display callous in the wake of the San Bernardino shooting.

“You can’t do this without insulting victims of gun violence,” said one of the counter-protest organizers, senior Baylor Morrison, 22.

Other bystanders were just perplexed.

“I don’t see how the solution to shootings is more shootings,” said Monica Hinostroza, 19, a sophomore from Fort Worth.