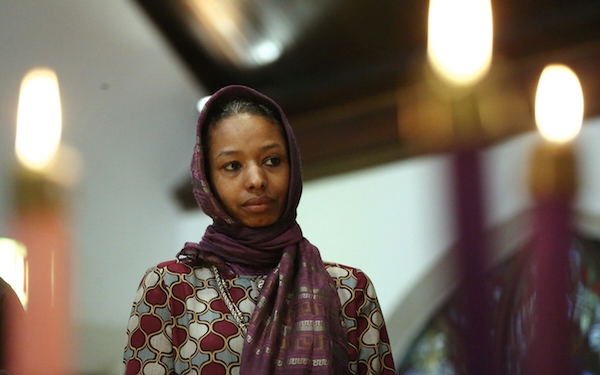 Larycia Hawkins, a Christian who is wearing a hijab over Advent in solidarity with Muslims, attends service at St. Martin Episcopal Church in Chicago on Sunday, Dec. 13, 2015. (Stacey Wescott/Chicago)

WHEATON, Ill. — If Wheaton College professor Larycia Hawkins had simply donned a headscarf to support her Muslim neighbors without explaining herself, she still might be administering final exams this week.

Instead, Hawkins, a tenured political science professor at the private evangelical Christian college west of Chicago, has been placed on administrative leave after proclaiming on social media that Christians and Muslims share the same God.

“I stand in religious solidarity with Muslims because they, like me, a Christian, are people of the book,” she posted on Facebook Friday. “And as Pope Francis stated last week, we worship the same God.”

That explanation concerned some evangelical Christians, who read her statement as a conflation of Christian and Muslim theology, even if they supported her symbolic gesture.

“While Islam and Christianity are both monotheistic, we believe there are fundamental differences between the two faiths, including what they teach about God’s revelation to humanity, the nature of God, the path to salvation and the life of prayer,” Wheaton College said in a statement.

The suspension, effective immediately and lasting through the spring semester, sparked protests on the campus Wednesday from students calling for Hawkins’ reinstatement and an apology. About two dozen Christian clergy also appeared with Hawkins at a news conference Wednesday to show their support.

“I think Wheaton takes very seriously its role as a Christian liberal arts institution and I think that Wheaton feels it’s doing its job on behalf of the constituency it serves and I respect the institution,” said Hawkins, who wore a purple headscarf or hijab as she stood at the podium.

Hawkins’ suspension comes amid national turmoil over anti-Muslim rhetoric on the presidential campaign trail and protests about the treatment of African-Americans on American college campuses. It also has a familiar ring in Illinois, where the state’s flagship university revoked a tenured faculty position from a professor who had posted a string of anti-Israel comments on social media.

Unlike the University of Illinois, a public institution, instructors at Wheaton must sign a “Statement of Faith” agreeing to 12 evangelical beliefs, including the literal truth of the Bible, the necessity to be born again in the Holy Spirit, the imminence of the Second Coming and the bodily resurrection of the dead. Students and faculty also pledge to abide by a community covenant, abstaining from premarital sex, drinking and homosexual behavior.

“Wheaton College faculty and staff make a commitment to accept and model our institution’s faith foundations with integrity, compassion and theological clarity,” the college said in a statement. “As they participate in various causes, it is essential that faculty and staff engage in and speak about public issues in ways that faithfully represent the college’s evangelical Statement of Faith.”

Protesters on Wednesday insisted that Hawkins had not violated the college’s statement of faith. Dozens of students gathered on the front steps of the college’s administration building to deliver a letter to President Philip Ryken and Provost Stan Jones, demanding Hawkins’ reinstatement.

“Dr. Hawkins is an essential part of the community here,” said Wyatt Harms, a senior political science major, who has taken several of Hawkins’ classes. “She’s a refuge for so many students on campus.”

Chanting “Reinstate Doc Hawk!” dozens of students pumped handmade signs in the air and squeezed through the front doors of the college administration building. Ryken told protesters he appreciated the “peaceful spirit” of their demonstrations.

“I really want to affirm your right to disagree with a decision by the administration,” he told the students. “I also want to affirm the things you see in Dr. Hawkins, the values. Those are things I’ve seen firsthand as well.

“At some level, I understand the frustration, and also the pain,” he added.

Wearing a purple streaked hijab, Sarah Thompson, 20, a junior from Indianapolis, said she didn’t have Hawkins as a professor but has several Muslim friends after spending a summer in Indonesia.

“I thought it was a joke when I saw it. No way would this happen,” Thompson said. “She’s very, very talented. She could go teach at any school, but she chooses to stay here. It’s upsetting when this reaction comes from other Christians, whose faith is rooted in love.”

“Dr. Hawkins has and continues to be an invaluable resource to the students of Wheaton College, particularly to those of color,” the petition said.

“We believe there is nothing in Dr. Hawkins’ public statements that goes against the belief in the power and nature of God, Christ, or the Holy Spirit that the Statement of Faith deems as a necessary requirement for affiliation with Wheaton College,” the petition said.

Some students supported the college’s decision. David Burnham, 21, a junior business and economics major from Naples, Fla., said the administration suspended Hawkins because the statement she made has “profound theological implications.”

“By placing her on leave, the school says it doesn’t believe Muslims and Christians worship the same God,” he said. “The college had no choice.”

Abbie Brigham, a 20-year-old junior majoring in history and music, from Jacksonville, Fla., said that for Hawkins to say that Christians and Muslims “unite under the same beliefs” insults both religious groups.

“I think that, as an evangelical school that has a statement of faith, it is wrong for us to call Muslims brothers and sisters in Christ,” she said.

Hawkins, 43, of Oak Park, planned to wear the hijab everywhere she went until Christmas, including on her flight home to Oklahoma, where voters in 2010 overwhelmingly approved a constitutional amendment banning Shariah, or Islamic law.

“In a time of real vitriolic rhetoric, by fellow Christians sometimes, and people who aren’t Christian who conflate all Muslims with terrorists — and that saddens me — this is a way of saying if all women wear the hijab we cannot discriminate,” she said in a Tribune interview. “If all women were in solidarity, who is the real Muslim? How is TSA going to decide who they really suspect?”

Hawkins sought advice from the Council on American-Islamic Relations to make sure she did not offend Muslims. Renner Larson, communications director for CAIR’s Chicago chapter, said he was intrigued by her idea when she approached him.

“There’s a lot of misconception about why women wear hijab and this idea that women are forced to wear it,” said Larson, who is not Muslim. “For a lot of people it’s a very powerful choice. Especially in the United States, it can be a hard, uncomfortable choice. So often women wearing hijab are the targets of attack and hatred because more than anyone else they are so immediately recognizable as Muslim.”

Wheaton administrators did not denounce Hawkins’ gesture but said as a professor at the premiere evangelical Christian college, her explanation should have been clearer.

Denny Burk, a professor of biblical studies at the Southern Baptist Theological Seminary in Louisville, Ky., said his greatest concern about Hawkins’ explanation was the lack of clarity about the particulars of Christianity. Without further explaining the nuances of her argument, she implicitly denied Christian teachings, he said.

“We’re people of the book, but our books are very different,” he said. “They’re witnessing to two different ways of salvation. The Bible is witnessing to Jesus Christ the son of God. That’s unique of all the world religions, and that uniqueness was what I thought was missing from what she said.”

But Miroslav Volf, a theology professor at Yale Divinity School and founding director of the Yale Center for Faith and Culture, praised Hawkins’ gesture as extraordinary and an apt Advent devotion.

“Advent is the time where Christians are particularly aware of the precariousness of those who are weak,” Volf said. “Just think of what is to come in the Advent time — a slaughter of the innocent, this darkness into which a word of grace comes.

“This is not so much about theology as it is about orthodoxy,” added Volf, who recently wrote “Flourishing,” a book about the importance of religions taking up common causes. “She has not denied any of the Christian claims that God was the holy trinity, that God was incarnate in Jesus Christ and Christ is the savior of the world who died on the cross. … I think in the Wheaton constituency, there’s strong enmity toward Islam.”

Gene Green, a professor of the New Testament at Wheaton, said what motivated Hawkins is the same concern many faculty members at the school share about the unfair scrutiny facing the Muslim community.

“Dr. Hawkins and others want to follow the example of Jesus, who went to those who were discriminated against,” he said. “He ate with people whom others rejected. Jesus calls us to love our neighbors, and the Muslims are our neighbors.”

At St. Martin’s Episcopal Church in Chicago on Sunday, a parish Hawkins occasionally attends, she was embraced for her act of solidarity. During the service, parishioners shared their own stories of how they were reaching out to their Muslim neighbors. Hawkins said she expected the embrace from the welcoming neighborhood church. She didn’t expect the backlash from her own evangelical brothers and sisters.

“I do care about my Christian brothers and sisters, and I didn’t set out to offend them,” she said.