J.J. Abrams finds himself at center of Hollywood’s universe 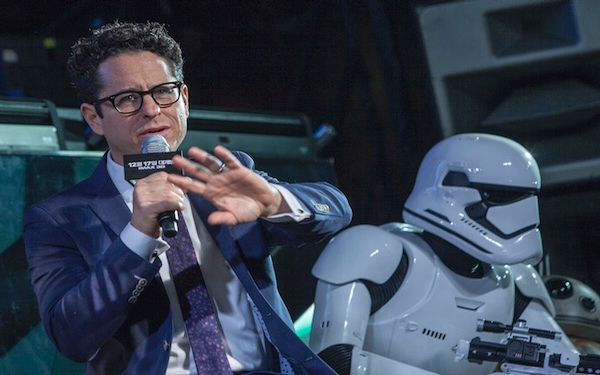 If you think the long build-up to the release of “Star Wars: The Force Awakens” has been intense — and, in case you’ve been living like a hermit, Obi Wan Kenobi-style, it has — just imagine for a moment being the film’s director, J.J. Abrams.

Abrams has loved the “Star Wars” universe from the beginning, since first seeing the original in 1977 at age 11. He spent hours as a kid playing with the Kenner toys. He dressed up as a Jawa for Halloween. His fan cred is unquestionable. But it’s one thing to be a diehard “Star Wars” aficionado; it’s quite another to hold the keys to one of the most beloved and most valuable pop-culture franchises in history in your hand.

With “The Force Awakens” finally hitting theaters, millions of “Star Wars” fans around the world are hoping the Force is strong with Abrams. Reviews of the film have been largely enthusiastic, and the box-office expectations couldn’t be much higher. Still, with the weight of the “Star Wars” legacy on his shoulders and the disappointment of the prequel trilogy still palpable for many fans, for Abrams, the stakes are unimaginably high. It’s “do or do not” time. There is no try.

“It’s like I’m standing at the doorway of the airplane door and we’re about to open the door,” Abrams, 49, said on a recent afternoon in Los Angeles, looking simultaneously somehow both exhausted and energized after three years of working on the new “Star Wars” film, the first to hit theaters in a decade. “Do I hope the parachute opens? Yes. But every time I feel remotely paralyzed by the noise or anticipation or expectation of it, I just look at the work I’ve seen done and I’m just grateful.”

The “Star Wars” series has always been about people (or creatures or droids) drawn by fate into a mission bigger than themselves — and, on paper, Abrams, who was raised in L.A., the son of two TV and film producers, seems like he was similarly destined to take the reins of the franchise. Not only did he grow up steeped in a love of the universe George Lucas had created but, coming into “The Force Awakens,” Abrams had already been credited with injecting fresh life into two other major film franchises, directing “Mission: Impossible III” and the 2009 “Star Trek” reboot.

Yet when the Walt Disney Co. first announced in October 2012 that it was purchasing Lucasfilm in a $4 billion deal and would be making new “Star Wars” films, Abrams did not want to throw his hat into the ring. He was coming off of directing “Star Trek: Into Darkness” and producing “Mission: Impossible — Ghost Protocol” and didn’t relish the idea of jumping directly into another sequel. He and his wife, public relations executive Katie McGrath, were talking about taking their three kids away for a while. The timing felt wrong.

Plus, this was “Star Wars,” among Hollywood’s most sacred texts.

“My knee-jerk response was, ‘I can’t wait to go see it but I don’t think I’d want to touch it,’” he said. “It didn’t feel like something I would campaign for because I love it so much and it feels like a sacrilege somehow to be involved. ‘Star Wars’ was so big. It was so much its own unreachable, powerful thing.”

But after being called in to meet with Lucasfilm President Kathleen Kennedy to discuss the possibility of directing a seventh “Star Wars” installment, Abrams started to change his mind.

“Kathy and I had a conversation that was enormously compelling,” Abrams said. “She said that (screenwriters) Michael Arndt and Lawrence Kasdan were already on board working — and I was an enormous fan of both of them. She said that George, having sold the company to Disney, would be stepping back and we wouldn’t be working under anything but what the story we wanted to tell was.

“That would be the master we were serving. And she said this movie takes place 30-something years after ‘Return of the Jedi.’ That was really it, and I started to feel like, ‘That’s really interesting.’”

Kasdan, who had co-written “The Empire Strikes Back” and “The Return of the Jedi,” felt that Abrams innately understood the need to return the franchise to its roots. “Kathy and Michael and I were pitching him, ‘This is what we think has been lost — do you agree?’ And he was totally on board,” Kasdan said. “When he agreed to do it, I just flipped out because he was so perfect. All of his movies had been leading up to doing this.”

From the start, the plan was to bring together returning “Star Wars” characters like Luke Skywalker, Han Solo and Princess Leia with a new generation. In early conversations with Kennedy, Arndt and Kasdan — with whom he would eventually co-write “The Force Awakens” — Abrams began to home in on the idea that “The Force Awakens” film would have a young female character at its heart.

As the co-creator of the TV series “Felicity” and the creator of “Alias,” he had long been drawn to stories centered on strong young women, and the idea of anchoring “Star Wars” with that type of heroine excited him.

“The thing that drew me in was this idea that there was this young woman out there in this vast universe who, 30 years after ‘Jedi,’ might not know who Luke Skywalker is or might not know that he was real or might not understand that she lives in a ‘Star Wars’ universe,” he said. “Then this whole story began to evolve of these people, including this character who became Rey (played by Daisy Ridley) and this young man named Finn (John Boyega), who’s a Stormtrooper who abandons his post. And suddenly we had the thing that we needed, which was a reason to make this movie.”

Shooting the film primarily in Abu Dhabi and at Pinewood Studios in Britain under tight secrecy, Abrams sought to keep things as old school as he could. Wherever possible, real sets and props and puppets were utilized instead of simply relying on CGI.

“What’s so weird about this movie is, I know that it’s ‘Star Wars,’ that it’s a big investment and there’s all this expectation, but it felt more homespun somehow every day making this movie than anything I’ve worked on,” Abrams said.

Despite the intense scrutiny, Abrams remained, by all accounts, continually even-tempered.

The one exception, according to Harrison Ford, may have been early in the shoot when an accident on the set resulted in the actor breaking his leg.

“If J.J. did ever lose his cool, it was when he was trying to pull a hydraulic door off my sorry ass when I was locked to the floor,” Ford said with a laugh. “He’s an extraordinary character: his energy, the depth of his focus.”

With months of anticipation finally reaching its feverish climax, “The Force Awakens” is widely expected to shatter box office records. But Abrams — who will keep a hand in the next two films in the “Star Wars” trilogy as an executive producer but doesn’t yet know what he’ll direct next — will judge the film’s success by a different measure.

“The financial aspect of it — it can’t be that, or even the reviews of it,” he said.

“The thing that would make this feel like it was a successful enterprise would be if people in those theaters, hundreds at a time, are looking up at one thing together and getting to laugh together and scream and cry and feel exhilaration together.

“To go into a theater and to get to experience that thing that I just remember so clearly as an 11-year-old. … If that can happen, I will feel like we did our job.”