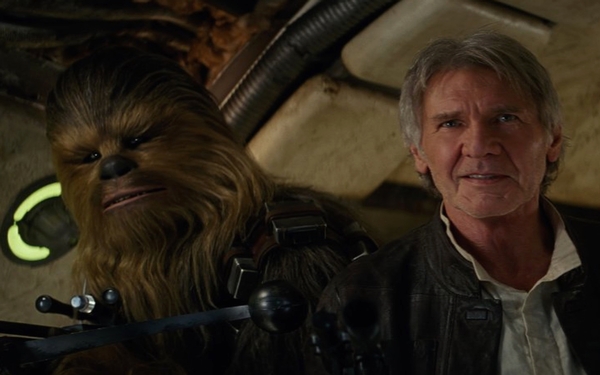 We love him. He knows.

Over the years, though, Harrison Ford has never been entirely at ease with his place in the “Star Wars” universe and the intense fan adoration that goes with it. Still, when he got the call about reprising his role as Han Solo in “Star Wars: The Force Awakens,” he grabbed his blaster and hopped back next to Chewbacca in the cockpit of the Millennium Falcon without hesitation.

Despite an accident early in shooting that resulted in a broken leg and his plane crash earlier this year, one gets the sense, as frenzied anticipation for “The Force Awakens” has built toward its release, that he has actually been having fun. Perhaps not even he can resist the power of the Force.

We spoke with Ford earlier this month about returning to the franchise that launched him to global fame nearly 40 years ago.

Q: When you think back to the buildup to the releases of “The Empire Strikes Back” and “The Return of the Jedi,” how does this compare?

A: There’s no comparison. Even then, given the success that surrounded the release of the first movie, this is a level of excitement and, it’s fair to say, merchandising genius, that I have not seen before.

Q: Are you enjoying it this time, at least on some level?

A: You know, this is not my favorite part of the whole enterprise. And if I appear to be having too good a time from time to time, it’s because I don’t know how to stay up late and because the (late-night talk show) hosts are really good at what they do.

Q: There’s a sense that you’re embracing all of this more than you have in the past.

A: (Deadpan) Maybe I just ran out of money.

Q: You came back later in your career to the role of Indiana Jones. Before this came up, had you ever thought about the possibility of coming back to Han Solo?

A: I came back to Jack Ryan and I came back to various other things where I did more than one. There’s no issue with coming back to revisit a character as long as there’s a development that makes it interesting for the audience. This was very ambitious in every sense. (Director) J.J. (Abrams) is a hard-working, highly skilled filmmaker. (Co-writer) Larry Kasdan is back to give us access to the tablets that came down off the mountain, as it were. The young actors who J.J. found and cast are really great. So it’s a pleasure to see the whole thing revivified in that way.

Q: After all these years, did you feel like you still had pretty easy access to the character of Han Solo?

A: Yeah, I mean, you dress up in those clothes and you look over your shoulder and there’s a guy in a dog suit and you kind of remember what the drill is. It comes back pretty quick.

Q: What was that first day on the set like? Did you feel at all self-conscious stepping back into that role after so many years, like you were doing an impression of yourself playing Han Solo?

A: No, I have walked more than a mile in those boots. And besides which, I’m not trying to play a guy who’s 35 or 40 years old. I’m not trying to be exactly the same. I’m trying to tell the story — and the story allows for the passage of time, allows for some degree of shift in attitude, some new complexity. So it was a comfortable fit.

(pauses) That was the first day. The second day, they closed the (expletive) door on me. Then, not so much. (laughs)

Q: You’ve now gone to conventions like Comic-Con and D23 and seen “Star Wars” fans up close. Watching them lose their minds, seeing people weeping when you say “Chewie, we’re home” in the trailer — has it hit you in a different way what “Star Wars” means to people?

A: The joke — the cosmic metaphysical joke — is that in some way it’s bigger than it ever was before. And I have to put that down to the fact that these films have been passed down through families to succeeding generations — and there have been a couple. And so there’s this broad awareness, this cultural — and I mean this to be in quotations — “significance.” It’s still surprising to be in a circumstance where you’re exposed to the degree of warmth that is invested and given. So, yeah, it’s a pretty emotionally interesting phenomenon.

Q: Your plane crash earlier this year seemed like a potentially life-altering experience. Has that changed how it feels to be going through all this?

A: No, I just don’t trust old airplanes that much anymore. (laughs) Other than that, in the words of my philosopher friend Jimmy Buffett, (expletive) happens.

Q: When I spoke with Lawrence Kasdan recently, he said Han Solo was always his favorite “Star Wars” character to write for.

A: That’s because he could get me to do almost anything. (laughs) I forgive him for everything except for the Ewoks.

Q: We all forgive him for that.

Q: For you, do you think about where Han Solo falls in your own personal pantheon of characters you’ve played?

A: There’s no way to do that. Each circumstance is different according to the people involved, the temperature of the world you’re releasing the film into, your own affinity for the material, where you are in the breadth of your capacity to be useful. There’s just too many variables to compare them. You’re just happy to have the opportunity to get on the horse again.