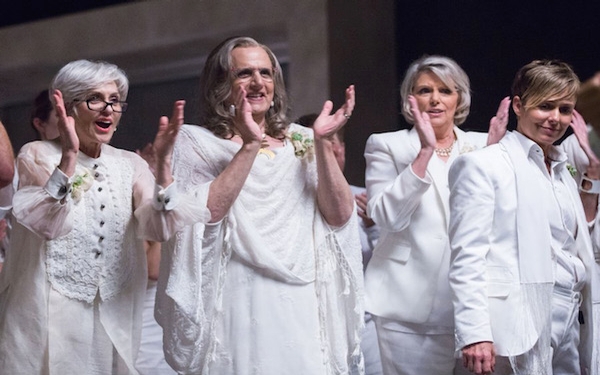 It was a disappointing fall TV season, but that doesn’t matter much anymore. Great TV now premieres throughout the year, and with so many terrific series just hitting their stride on platforms new and old, television remains a literally movable feast. So much so that any list of 10, 20 or even 30 of the top shows is far more reflective of the list-maker’s personal taste than quantifiable superiority. Still, it is that time of year, so here is my list of some of the best things to happen on the flat screen this year, to be read with the understanding that there are just as many fine and artful works left off as included.

“Game of Thrones” (HBO): With George R.R. Martin working on the sixth novel of his “A Song of Ice and Fire” series, D.B. Weiss and David Benioff were forced to go off-book, but HBO’s astonishingly ambitious series continued to be astonishing and ambitious. There is still nothing like it on television.

“UnReal” (Lifetime): Having canceled “Witches of East End” and moved the upcoming “Damien” to A&E, Lifetime finally joined the renaissance with Marti Noxon’s wickedly sharp and disturbingly funny scripted take on a “Bachelor”-like reality show. Television, reality and otherwise, may never be the same again.

“Parks and Recreation” (NBC): The show that put hope back into TV humor came to an end with a truncated season that managed to do more, and do it better, than many comedies with full season orders. And then it delivered one of the best finales in the business, comedy or drama. We miss you, “Parks and Rec.”

“black-ish” (ABC): Kenya Barris continues to prove that the personal is the political with his sharp but unfailingly humane family comedy in which the definition of “black experience” is continually assessed and re-assessed but never fetishized. The season premiere, an episode revolving around the N-word, was hilarious and brave and should be required viewing for, well, everyone.

The Benghazi hearings: Whether you like Hillary Clinton or not, watching the former secretary of state face down 11 hours of often repetitive, sometimes ridiculous and almost never revelatory questions by members of the House Benghazi committee gave new meaning to the term “binge-watching.”

“Foyle’s War” (Acorn TV): Anthony Horowitz’s brilliant series came to an apparent end once again (it has ended twice before, only to be resurrected) with former DIS and then MI5 agent Christopher Foyle (Michael Kitchen), a beacon of reason and decency in an often chaotic and indecent world, sauntering off into the sunset. On the up side, maybe more people will start subscribing to Acorn TV, a smorgasbord of British classics.

“Marvel’s Jessica Jones” (Netflix): Superheroism was redefined in Melissa Rosenberg’s adaptation of the “Alias” graphic novels. As Jessica, the perfectly cast Krysten Ritter proved that the ultimate superpower is regaining control of your own life.

“Mr. Robot” (USA): First we were enthralled by Rami Malek as Elliot, the paranoid and drug-addicted cyber-vigilante. Then Sam Esmail’s switchback story of cyber-anarchists and a world with no debt sucked us all the way down the rabbit hole. Counting the days to Season 2.

“Transparent” (Amazon): If you thought Jill Soloway’s groundbreaking series was all about the transgender Maura’s (Jeffrey Tambor) experience with transition, think again. Each half-hour of this beautiful comedy explores both the modern and essential definition of self.

“Gotham” (Fox): Moody, broody, aware of its “Batman” heritage yet entirely its own creation, “Gotham: Rise of the Villains” is graphic noir at its best with a transfixing cast that goes on for days. Also some of the best sets and cinematography going.