Inside scoop from the junior acts on festival circuit 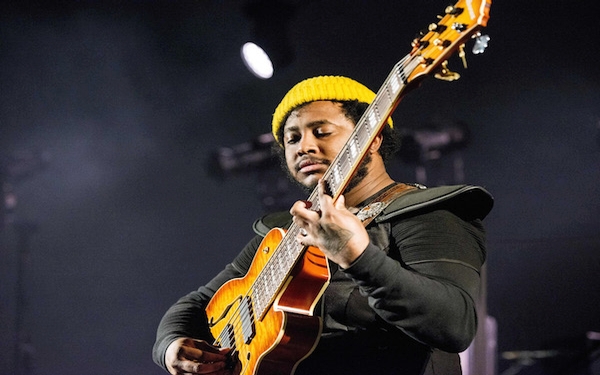 The life of an artist on the festival circuit isn’t for the thin-skinned, or faint of heart. For acts like Deadmau5 or Skrillex, festivals are a lucrative, ego-stroking endeavor. For acts in the middle of the bill, fests are an often thornier mix of indifferent crowds, ego-crushing time slots and bad catering.

Daniel Armbruster, Joywave: I judge a festival by the catering. More than likely, I’ll be sitting in catering the whole day, anyway.

Thundercat: That is a totally true statement. The food can dictate the type of festival it is. If you ask for a bottle of whiskey and they only have Heineken, you just know.

Armbruster: I’m not a big festival person, I wouldn’t go to one. There’s too many people, it’s too crowded. I think I would die after two hours, it’s so loud.

Jordan Kelley, Cherub: I personally do not like going to festivals if I’m not playing. Even if I am playing, I prefer to play them, then leave.

Jason Huber, Cherub: I love them. I’ve been going for over 10 years. I feel like I’ve grown up in festivals.

Thundercat: Sometimes it does seem like a (circuit), you know? It grounds you a bit if you see friends you’ve seen on tour for a minute, and then you see them (at the next festival), it does make you feel like you’re less crazy.

Armbruster: We’re not the most social guys in the world. We sit at a table by ourselves in the corner, but you can see people hanging out. … I tried to meet Limp Bizkit at Redding and Leeds, but I didn’t get far. They did a Rage Against the Machine cover. It was awesome.

Mija: I’ve met a lot of really cool people backstage. Most of the time, everybody has their green room or their trailer and everybody’s kind of separated in that sense, but there’s a lot of festivals, like (Georgia’s) TomorrowWorld, where there’s artist compound areas, where you get to walk around and mingle with other artists.

Early signs that your set might not go well

Mija: You can’t really tell until you start playing. With an earlier time slot, you don’t really know what you’re getting yourself into, but once you get going you can vibe out a crowd, and handle it from there.

Thundercat: Sometimes people are not inspired to be, like, “Woo!” It was, like, 2,000 degrees at (Brooklyn, N.Y., festival) Afropunk. I almost got naked onstage, everyone was roasting like a rotisserie chicken, your instrument’s falling out of tune, your skin’s burning. But it’s part of the culture, you just try to enjoy it.

Kelley: We can usually tell what a crowd is going to be like before we step onstage, just based on their attention span to the opening artist.

On how to connect with a disinterested crowd

Armbruster: If you have a stage and a microphone, you can berate people into moving their bodies. We played Summerstage in Central Park, and in the middle of one of the songs, I had to have a chat with the audience: “Listen, I understand this is New York and you guys are so cool, but you’re going to have to start to move or the rest of the concert is canceled.” And it worked. If you say it with a straight enough face, I think people will think it’s a contractual thing. (You have to be) straight-up threatening.

Kelley: What I’ve learned through the years we’ve been doing this is, sometimes connecting with the crowd is just playing music. You can tell, like, should I go on a rant? They (sometimes) don’t appreciate that as much as you shutting … up and playing the song. You just need to vibe it out.

Thundercat: I love telling jokes onstage. It seems to make things really awkward (laughs). That awkwardness makes people perplexed as to why they’re standing there. You talk yourself into a hole, get stuck, then start the song, basically.

On not taking a tough crowd personally

Armbruster: At (Alabama festival) Hangout we watched Jack U play and they were doing nothing, but people lost their minds. We (also) saw Spoon and Jenny Lewis, and people were just staring at them, but Jack U, they lost their minds and they weren’t even doing anything. Nothing against them, but the crowd’s reaction didn’t line up with what was happening. It’s where the culture’s at right now. I’d rather listen to Jack U than Jenny Lewis. Nothing against her, but because it’s interesting, I guess. I totally understand it.

Thundercat: I’m definitely used to it. You go up there and your sound may or may not work, and you may be snotted up and have to use the bathroom and nobody cares, then you go to the hotel and throw a temper tantrum because they don’t have the juice you want, then you go out there and do it again.

Mija: It’s really about the energy that you put into it, because people can feed off that. If you’re getting bummed a couple songs into your set, because people aren’t feeling it and you thought the last track you played was the greatest song ever, they’re going to reciprocate. If you can remember that what you’re doing, you’re doing it for yourself because you love it, I think that helps you engage with crowds better.

Armbruster: I don’t know, that’s a question for the sales department. I haven’t seen our numbers, but I assume we’re platinum.

Thundercat: I don’t know. But I did just buy a sewing machine.