‘The Revenant’s’ adventures weren’t all on-screen 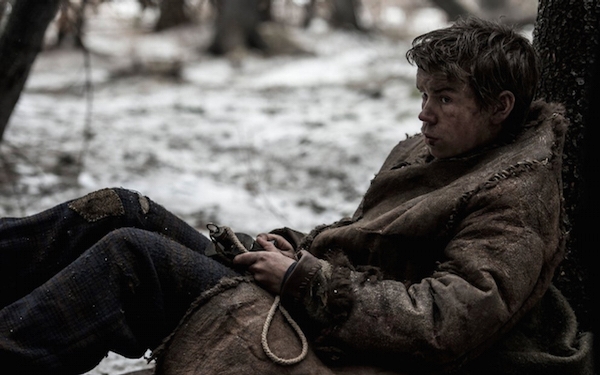 Will Poulter in "The Revenant." (Photo courtesy 20th Century Fox/TNS)

NEW YORK — Last March, near the scheduled end of six months of shooting in and around Calgary, Canada, the filmmakers behind the 19th century revenge epic “The Revenant” realized they had a problem. A somewhat flaky problem.

Snow, the key ingredient in the naturalist film’s production design and backdrop to its climactic showdown, was nowhere to be found. It wasn’t on the Alberta prairie, had gone missing on the vast expanse of Fish Creek Park, had up and evaporated from the precipitous foothills of the Canadian Rockies.

That posed a challenge to the fight between Leonardo DiCaprio’s taciturn fur trapper Hugh Glass and Tom Hardy’s brassy outlaw John Fitzgerald — the payoff of 2 1/2 hours of slow-build drama. The scene’s first half had been shot, months earlier, in abundant snow. Now the second half couldn’t happen.

“We would check the weather reports every day and my stomach just sank more and more,” said Mary Parent, a producer on the film, which is directed by Alejandro G. Inarritu, who won an Oscar for “Birdman.” “Finally we just said we had to wrap. I thought, ‘This is it.’ There would be no movie.”

In the months that followed, scouts went around the world, from Norway to New Zealand, hoping to find snow to match the rest of the film. After months of anxiety — if a spot couldn’t be found by the end of the summer, the shoot would have to wait until next year, at least — salvation came from the Southern Hemisphere. Photos from a remote location had solved their problem.

Which is how a critical chase scene in “The Revenant” begins in Calgary in March and ends in Argentina in August.

“Was that the biggest challenge? I’m not sure,” Inarritu said recently, sipping a hot beverage in the finally warm quarters of a boutique hotel here. “Probably not. There were bigger challenges.”

They all led to “The Revenant,” a film whose Christmas Day release belies its brutal appeal. The film’s rigor has already earned it plaudits for what happens on the screen — and a growing, complicated legend for what happened off it.

Chronicling Glass’ battle for survival after he’s mauled by a bear, “The Revenant” doubles as a revenge story, as the hero eventually stalks — and drags, grunts and flails at — his trapper ex-comrade Fitzgerald after the latter tragically wrongs him.

Frontiersmen by trade, the characters are at bottom opportunists, and they frequently do battle not only with each other but with a rival French group, with displaced Native Americans and, perhaps most mightily, with the harsh natural landscape. All of it is filmed by the Oscar-winning cinematographer Emanuel “Chivo” Lubezki with a measure of 360-degree stark beauty.

Few movies in recent memory have tackled timeless subjects like survival and revenge on a canvas of this scope, blood and gore framed against auteur-postcard cinema. Grit has never looked this good.

Fewer still have done it by putting creators through as many paces as its characters.

Directors often talk about how a movie’s story mirrored their own journey — an understandable if unconvincing bit of self-mythology. One would be hard pressed, however, to argue with the claim here.

DiCaprio spent hours shivering in icy lakes, sleeping inside a horse carcass and getting thrown 20 feet through the air by wires. Days would turn to weeks as Inarritu, Lubezki and production designer Jack Fisk scoured rural Alberta for the right natural light and setting to match the 1820s American West.

“A lot of the time it felt like we were surviving much the way the trappers of the period must have felt.” Fisk said. Once, he and another crew member were scouting for a location deep in the snowy woods. “We didn’t have a weapon or bear spray, and we realized we weren’t alone” — a revelation made unambiguous by a fresh grizzly print. “I thought, ‘Maybe getting out of here is more important than the location.’”

If Inarritu didn’t set out to turn the production into his generation’s “Apocalypse Now” (minus the Brando-esque fits), he didn’t shy away from it either. He charged crew members to, as much as possible, build the set only with what 1820s trappers would have at their disposal, and shot many scenes in climates well below freezing.

“This is a film about adventure, and it’s man against man and man against nature and a bear against a man and a man against a mountain,” Inarritu said, with the boldness of both speech and facial hair that made him one of last Oscar season’s most compelling characters. “And the only way to really show that was to live it.”

Adapted liberally from Michael Punke’s fact-based novel by the screenwriter Mark Smith, the “Revenant” script had floated through the hands of different directors over the years. The South Korean auteur Chan-wook Park took a shot; so did the Australian John Hillcoat. Inarritu, drawn by the modern echoes of environmentalism and nativism, and feeling refreshed from a set of artistic epiphanies that would eventually lead to “Birdman,” got it to the finish line.

Similar themes resonated with DiCaprio. After he lay in the snow for hours, acting while barely moving or speaking, crew members would often step in to towel him off to prevent frostbite — and so he could go back to the scene.

“There was an existential narrative that we had fully in place from the onset of making the movie,” DiCaprio said. “I knew right when I signed up, so much of what this movie was, so much of the undertone and the themes, would come from the experience of being there.”

The actor said that although the snow and ice were painful, and he wasn’t such a fan of sleeping inside a horse, it was the fur pelts that nearly did him in. “I had no idea how heavy they could be, and how hard it could be to act while climbing a mountain with them on your back,” said the actor, whose performance has stirred Oscar buzz.

But an A-list star suffering for his art is one thing; a grip or makeup artist spending months in the tundra for modest pay is another.

Reports about delays in shooting and crew members leaving suggested that “The Revenant” became the war of attrition that every director, not to mention studio, has night sweats about. Not helping was the budget, which reportedly climbed well over $100 million. At one point, Inarritu brought in the veteran Parent to work more closely on the set.

“For some people it wasn’t right and some people I asked to step out because they were not at the level I needed,” Inarritu said of the departed crew members. “But it was very few people — I can count them with two hands.” He added, “I appreciate those for whom the journey was not right. It was not going to be a comfortable set with no coffee. The demands were high.”

Technical challenges could be tricky too. For a large opening battle scene, Lubezki had to calculate the speed of extras, the distances of the cameras and other mathematical factors as he took in a sweeping amount of terrain. “There’s no book that tells you how to do any of this,” he said.

But the greatest technical marvel is the bear scene, as the animal, feeling threatened, comes at Glass. The scene was so brutal that there was a much-traveled Internet rumor that the bear rapes DiCaprio’s character.

It doesn’t — Inarritu laughed and wondered why these things take hold — but maybe the greater mystery is how the scene came to be in the first place. The bear attack is a single-take affair that radiates so much realism it instantly makes every other on-screen animal seem like a cheap fake.

Inarritu said he didn’t want to “ruin the magic” and explain how he did it. But discussions with various crew members shed light on the process. Among other things, it involved harnessing DiCaprio to wires and slamming him into the ground and trees to heighten the feeling that he’s really being hurt; a computer simulation of the bear was put into the movie later.

For a few of the shots on the ground, as when the bear puts a paw on Glass’ face, a man in a suit was used on set so DiCaprio’s face could get the appropriate squashiness. The man was then replaced by the computer-generated bear in post-production. Inarritu studied dozens of videos of bear attacks on YouTube before shooting the scene.

For the director, “The Revenant” became a personal crusade. Having made, with “Birdman,” a movie about taking risks — and also about sometimes placing art above human politesse — this was a logical next step.

“It was a great opportunity to explore cinema the way I think it should be — as a spectacular, immersive experience, at the same time intimate and epic,” said Inarritu, who cited as an influence Werner Herzog’s man-versus-daunting-nature classic “Fitzcarraldo.”

“Kubrick said a film like this is like trying to write a poem on a roller coaster, and that rang true,” Inarritu added. “To not get lost on it was the thing.”

Asked for his feelings in hindsight, Fisk offered a less poetic but more succinct assessment. “We survived,” he said.