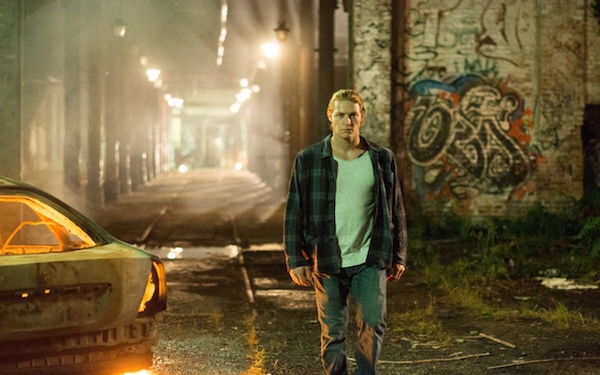 If you are an extreme sports junkie, “Point Break” is cocaine. If you are a fan of good writing, it’s a placebo.

This “Point Break” is less of a remake and more of a re-imagining of the 1991 cult classic cops-and-surfers film starring Keanu Reeves and Patrick Swayze. The production is loaded with visually stunning stunts. In an effort to give the movie as much visual splendor as possible, director Ericson Core (“Invincible”) opted to go with real locations — like the sheer cliff walls of Angel Falls — rather than resorting to green screens.

The result is stunning. Too bad the rest of the film feels more like it was written on a bar napkin at 3 a.m. after a night of heavy drinking.

When the story looms its confused head, this “Point” begins to break.

Just as in the original, Johnny Utah (Luke Bracey) is a former athlete who joins the FBI. Utah is looking for some meaning in his life after a major tragedy. In the original, Reeves played a football player while Bracey is a former star of extreme motocross riding.

Utah’s background makes him the perfect agent to track a group of robbers who use extreme sports — from fast driving to high flying — to commit their crimes. What makes the gang’s daring deeds different is that they don’t keep their ill gotten goods but act like Robin Hood and give to the poor.

This is where the new “Point Break” takes a 90-degree turn from the original.

The current crop of thieves aren’t committing the crimes for their own benefit but as a tribute to the Earth after they accomplish the mythical “Osaki Eight,” a series of challenges created by a dead spiritual guru. It is made up of eight extreme sports missions designed to honor the forces of nature. Complete the eight and the person is supposed to achieve nirvana.

What that means is that they are eco-terrorists on a spiritual mission led by the philosophy spouting Bodhi (Edgar Ramirez).

The biggest disservice to this movie is linking it to “Point Break.” The 1991 film has a loyal fan base and the updated version hits too many bumps when making comparisons. Everything from the ecology element to globe-trotting crime spree keeps moving this movie further away from the original.

The new “Point Break” needs to be measured on its own merits. The best merits are for the stunts, which are breathtaking with better footage than most documentaries on extreme sports.

On the other hand, Bracey is no Keanu. If you are comparing the films, then Bracey loses out because Utah was a signature role for Keanu. Measured on his own, Bracey brings a warmth, charm and commitment to the role that works in this version.

No matter how good Bracey is, the film can’t rebound from the overly complicated script by Kurt Wimmer. In the original movie, it was easy to sit back and enjoy the action because the plot was very simple. The new “Point Break” is a complicated mess of the struggles to find physical and spiritual enlightenment, the necessity to pay tribute to the planet they have defeated in their quests and the assumptions and defiance of authority made by the young FBI agent.

“Point Break” shouldn’t be weighted down by the meaning of life, it should just embrace the beauty of the world and the skills of those who conquer the unconquerable.