Webb Wilder has the blues, which is good for us 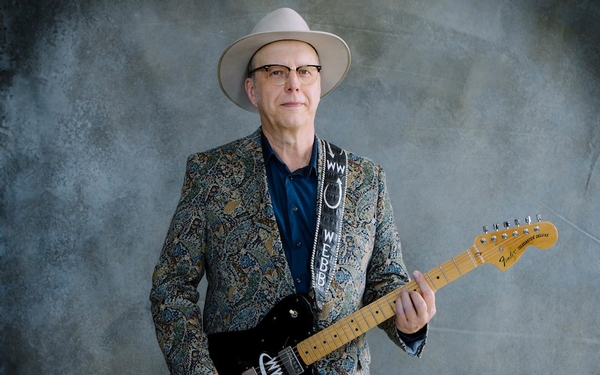 Twenty years ago, Webb Wilder was in the shower, and he started singing “this mournful minor-key thing” he thought he’d made up: “Stones In My Pathway.” He didn’t realize Robert Johnson, the famous 1930s Mississippi bluesman, had put out a similar song about sexual frustration called “Stones In My Passway.”

Wilder laid it down on a hand-held tape recorder, then went to a friend’s home studio and fleshed it out with drums and other instruments. “It languished for years,” said Wilder, 61, the Mississippi-born rock ‘n’ roll singer who has played to a loyal nightclub following since the early ‘80s.

“I don’t know that I ever heard it, although I must’ve, because I bought the Robert Johnson CD stuff, and I think I had the vinyl before that. Maybe subconsciously it went into my mind,” Wilder said by phone from his Nashville, Tenn., home. “That sounds like crap, but it’s true.”

After Wilder and his longtime producer, George Bradfute, rediscovered the recording last year, they realized the scratchy, homemade, singing-just-outside-the-shower version of “Stones In My Pathway” perfectly fit the album they were working on. “Mississippi Moderne,” Wilder’s ninth album, is characteristically fast-paced and well-crafted, focusing mostly on obscure covers such as the Kinks’ “I Gotta Move,” Charlie Rich’s “Who Will the Next Fool Be?” and Chicago bluesman Otis Rush’s “It Takes Time.” There’s also “I’m Not Just Anybody’s Fool,” written by Wilder’s longtime friend and collaborator Bobby Field, and an original called “Too Much Sugar for a Nickel.”

Wilder, whose real name is John Webb McMurry, has been a blues fan since he brought the Who’s “Tommy” to his family home in Hattiesburg, Miss., in the ‘60s. In a fantastic biographical twist, his Aunt Lillian and Uncle Willard were the McMurrys, who owned independent label Trumpet Records, on which they’d recorded hallowed blues names such as Elmore James, Sonny Boy Williamson and Little Milton.

As the story goes, Wilder was walking through his family home as quickly as possible, trying to avoid the adult conversation en route to his bedroom, when Aunt Lillian spotted his vinyl copy of “Tommy.” She did not approve. “I thought the rock opera was an abortion,” she told him. No other grown-up at Wilder’s home talked like that. She was referring to the Who’s thin cover of Williamson’s blues classic “Eyesight to the Blind” — Aunt Lillian had produced the original. After that, although Wilder remained a Who fan to the point of meeting guitarist Pete Townshend as part of a group of fans years later, he turned to his aunt as a blues-history mentor. She played him reel-to-reel tapes.

“It was a process, an evolution for me, getting the big picture on the whole thing,” he said.

By the early ‘80s, Wilder was in several rock ‘n’ roll bands, including Hattiesburg’s the Power of Steam and the Drapes. He and his old friend Field, the band’s drummer, were reading a lot of Raymond Chandler novels and watching “The Andy Griffith Show,” and they hooked up with Steve Mims, an Austin, Texas, college filmmaker. Together, they conceived a short film called “Webb Wilder, Private Eye,” which cast the singer as a deadpan, bespectacled gumshoe with a charming southern vernacular. (Wilder’s character refers to one woman, awesomely, as “volumptuous” — Fields’ phrase.) The film, which launched Wilder’s music career as well as his early band, the Beatnecks, aired repeatedly on late-night cable networks A&E and USA and is easy to find these days on YouTube.

“I had always been a class clown,” Wilder said. “The first one has that first-season-or-two ‘Andy Griffith,’ high-contrast, black-and-white kind of look.”

The Beatnecks’ debut album, 1986’s “It Came From Nashville,” follows the Rockpile/Blasters/Los Lobos/Stray Cats blueprint of accelerating rockabilly to the edge of punk rock. It’s a blueprint for Wilder’s entire career, which has never come close to igniting into rock mega-stardom. In the late ‘80s, the band played a prestigious music-business convention in Miami and Wilder, nervous and pacing, passed Aerosmith frontman Steven Tyler in the hallway without even noticing the rock star.

After Wilder’s showcase, Tyler sent a note to the band: “You guys are the balls. I’m going to get your album.” But Beatnecks management’s attempts to reach Tyler went nowhere. “That was the closest we came to anything like that,” Wilder recalls.

“Mississippi Moderne,” released in September on Wilder’s longtime label Landslide Records, was no blockbuster, as usual, but it helped solidify his loyal audience. The singer has already begun to demo songs for his next album, and continues to plan a tribute album to Trumpet Records, covering songs by James, Williamson and the rest. “We’ve had busier years, but this is the busiest December I remember ever having,” he said in a half-hour interview late last month. “I have tons of songwriting ideas, tons of cover ideas. I look at my Day Runner calendar and there’s ink on every day.”