Araabmuzik says that there isn’t much in a name, really 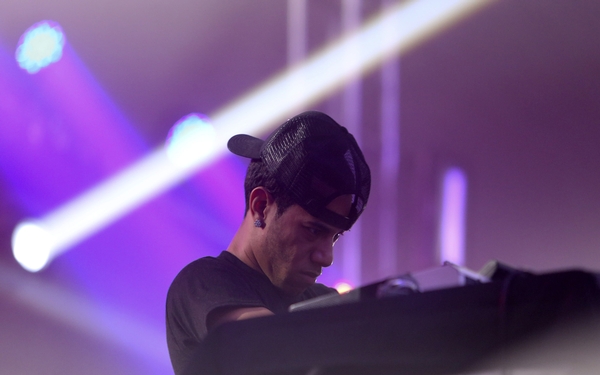 American DJ Abraham Orellana records and performs under the name Araabmuzik, which has caused none of the problems you might think it would. “It’s just a name,” Orellana says in a phone interview. “A lot of people have names that are nothing to do with nothing.”

Orellana’s friend gave him the name when he first began making music. “He’s like, ‘Your name’s now Arab (pronounced “AY-rab”). I’m calling you young Arab,’ because at the time I was making music without an actual name for myself. I pretty much just ran with it, added an extra ‘a’ to it, and then later down the line I added ‘muzik.’ Of course people (might) think I was an Arab or something like that. I always made it clear that I was Hispanic.”

Orellana, 26, never really considered changing his name, mostly because he became very successful very quickly, and it was suddenly too late. “It’s something I’m stuck with, like you have your first phone number and you never changed it throughout the years, you just kept it.”

Growing up in Providence, R.I., Araabmuzik was a prodigy who began making music when he was a toddler. In 2005, when he was a teenager, he graduated from the drums to the MPC, a music production center that serves as both a drum machine and sampler, and on which he can volley a dizzying assortment of drum patterns and sound samples and beats. The MPC, made by Akai, with whom he has partnered, forms the basis of his ever-shifting, still-gelling sound, and Araabmuzik, dubbed “The MVP of the MPC,” has become synonymous with the machine’s rise. He plays an MPC live during shows, vigorously, as he would an instrument, and is widely seen as its most-skilled player.

Soon after discovering the MPC, Araabmuzik found work beatmaking and doing production work for artists like Cam’ron (“Get it in Ohio”), the Diplomats (“Salute”), 50 Cent and Eminem (“Murder One”), and a host of acts on the Dipset label. He slowly began dropping music of his own, mostly mixtapes and EPs, and one album, the messy, trippy, trance-heavy 2011 release “Electronic Dream.”

He has spent most of his recording career toggling between hip-hop, which Orellana grew up in, and loves, and dance music. EDM is a natural fit for the MPC’s infinite musical possibilities, and, with its festival and party circuit, it’s more lucrative.

“I stay true to the hip-hop side, because that’s where I came from,” Araabmuzik says. “I can’t really switch. I don’t really want to go full-throttle with EDM, because everyone knows me coming from the Dipset days, the hard rap. I infuse rap stuff with EDM stuff anyway. I’m like a hybrid of both.”

EDM can be a cliquey, closed-off community, but Araabmuzik figures his singular work on the MPC helped ensure his passage from hip-hop. “I came in the game with something new, that not everyone was doing or seeing. In the electronic world, not everyone is accepting. I feel like they choose who should be a part of the electronic dance scene.”

Acceptance in dance music may be tougher to earn, but, once won, its people are more welcoming. “I think hip-hop is more snobby, and EDM people are more fun, more open, because they’re not cut from that cloth,” Araabmuzik says. “Rap people (have big egos). It’s not everyone, but it’s the majority. But with EDM, everyone is totally happy and showing love.”

In December, Araabmuzik dropped two releases in a three-day span: “Goon Loops,” a seven-track EP, “was pretty much all the raw hip-hop-style beats that I’m known for making,” he says. “‘King’ is EDM stuff. (They were released) a couple of days apart from each other, so it’s not drowning everybody.”

2016 is supposed to be the year Araabmuzik officially breaks. He plans to release sequels to “Goon Loops” and “King,” and is also working on upcoming (or just released) projects from Slaughterhouse, Joe Budden and Alicia Keys, whose husband and producer Swizz Beatz was an early idol of Orellana’s. “That’s family. Everything he’s working on, he keeps me in mind. That’s definitely something I’m very grateful for.”

Araabmuzik is still working on “Dream World,” his big, high pressure, coming-out-party of an album. “It was supposed to come out (in 2015), but I pushed it back so I could still really perfect it and work on it more, because I didn’t really feel like I was satisfied with it.”

“Dream World” has faced several unmet release dates and at least one Twitter war (when a song featuring singer Kelela was leaked, to her unhappiness). When it finally gets released (sometime this year, Orellana says), it will have to be everything to everyone, to rap fans and dance music fans and blogging tastemakers and radio programmers, and to Araabmuzik, who can’t stop tinkering with it. “I want it to be the continuation of ‘Electronic Dream,’ and still kind of have that sound,” he says. “I don’t want to completely switch it up to where it doesn’t really sound like something I would do. I want to keep everything I do pure, and true to my sound.”

“Dream World” is about 70 percent finished, Araabmuzik figures. “My fans already know that anything that drops is going to be something that’s great. I just put out great material all the time. I mix and master everything myself. This is going to be my first real official album, versus dropping mixtapes. I definitely want to make a big impression.”