Q&A with Bruce Dern: Not even Quentin Tarantino can resist Dern’s way around a scene 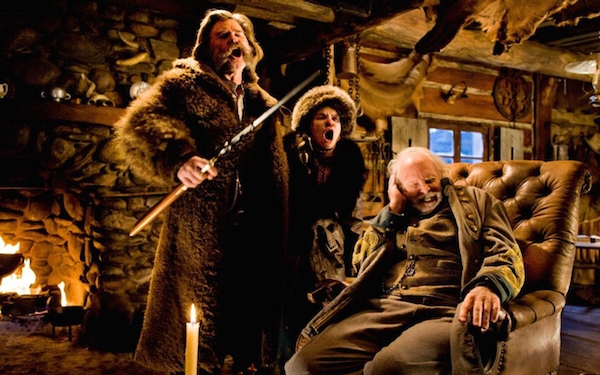 A few days before the opening of his latest film, Quentin Tarantino’s wide-screen western “The Hateful Eight,” Bruce Dern was holding court at a famed Hollywood eatery remembering the time Alfred Hitchcock got stuck in his director’s chair.

Dern, now 79, had a small part in Hitchcock’s 1964 thriller “Marnie” and then landed a starring role in the Master of Suspense’s final film, 1976’s “Family Plot.”

“The first day on ‘Family Plot,’ I pulled my chair next to Hitchcock, who sat in his little director’s chair. Just before the end of the first day, he turns to his first assistant and said, ‘I wonder if I might have a word with my crew?’ Because he was so big in the neck area, he would never turn to talk to you because it would take him three minutes and a chiropractor to get his neck around.

“As he stands up, the whole chair comes with him because his size spills through the chair. He doesn’t even look at me, but says, ‘A hand please.’ So I am right behind him, grab the legs of the chair and he hops out of the chair.”

“He goes to the apron of the soundstage and says, ‘Ladies and gentlemen, I would like to thank all of you for quite a wonderful first day.’ They are kind of applauding. And then he says ‘Personally.’ He walked around the stage and thanked individually 71 people on the set by their first name. “

Hitchcock wasn’t the only character on that set. The colorful, candid, amusing and abundantly talented Dern is one of a kind as well. And he’s a Hollywood survivor. Dern studied at the Actors Studio in New York with Lee Strasberg and Elia Kazan, before making his movie debut in Kazan’s 1960 drama “Wild River.”

Dern’s made some 80 films, earning Oscar nominations for supporting actor for 1978’s “Coming Home” and for lead actor as a cranky old coot who thinks he’s won a magazine sweepstakes in Alexander Payne’s 2013 dramedy “Nebraska.” He’s starred in the cult 1972 sci-fi drama “Silent Running,” 1969’s “They Shoot Horses, Don’t They?,” 2003’s “Monster” and Tarantino’s 2012 hit, “Django Unchained,” and now “Hateful Eight,” in which he plays a racist former Confederate general.

Dern, who is the father of two-time Oscar nominee Laura Dern, is a master storyteller who knows his way into the heart of the interviewer, who has chatted with him several times over the years; “you never age,” he says charmingly at one point.

Here are some highlights of our interview.

Q: You’ve said that Hitchcock is one of the six directing geniuses you have worked with over the decades. Who are the others?

A: The directors are Kazan, whom I was under contract to; Mr. Hitchcock; Douglas Trumbull, who did ‘Silent Running’; Francis Ford Coppola; Alexander Payne; and Quentin. All of these guys were very approachable.

Q: What was your first day like on “Nebraska”?

A: Alexander said to me, “Did you see anything here this morning that you have never seen before in your career?” I said, “It seems like everybody is pulling their oar.” He said, “Well hopefully, because we have a 90-person crew here and 59 have worked on every movie I have ever made so you sir can dare to take a risk because we got your back.”

He said “This is Phedon Papamichael, he’s your cameraman. I wonder if you will do something for Phedon and I that I am not sure you have ever done in your career — let us do our jobs. Never show us anything. Let us find it.” That is what I did in ‘Nebraska.” I stopped pushing and performing, trying to elevate anything. About a year earlier, I said I just don’t want to act anymore, I want to get better. I want to improve. I want to try and be a real human being.

Q: Your character in “Hateful Eight” is really intriguing. A Southern “gentleman” who is still fighting the Civil War.

A: He is the most honest character in the piece. He’s not lying about anything. Quentin kind of wrote this role for me. I think he has always felt and some people now are starting to say that one of the neat things about the movie is that there is a humanity in it, and it is in the role of Bruce Dern.

Q: Is it true that Tarantino permitted you to embellish your part?

A: Quentin allowed me to do things that he didn’t allow the other actors. One day somebody complained, “Why can he add dialogue?” and Quentin said “It is because I can’t write this stuff that comes out of his mouth.” It’s sudden and it always fits the character.

Quentin gave me the best compliment I have ever had in my life. It was 2 in the morning and we were still in Telluride and were doing a sequence where I had very little to do. He came to me and put his arm around my shoulder and said “You have no dialogue and you’re still finding ways to be different in every take.”

Q: You describe these embellishments as “Dernsies.” What’s the origin of that term?

A: When I first came out here both Gadge (Kazan’s nickname) and Lee Strasberg said you are going to be the fifth cowboy from the right for the first decade you are out there. You have a tendency to get lost in the characters you play so there is not a conventional leading man status to you. We want you go out there and be the most interesting fifth cowboy from the right. That is when I started embroidering a little bit in “Hang ‘Em High” and “The War Wagon,” those first early westerns I did.

Gadge always said to me never go to a director and tell him what you want to do in a shot. I do the camera rehearsal, but I am not going to give a performance until the switch is on.