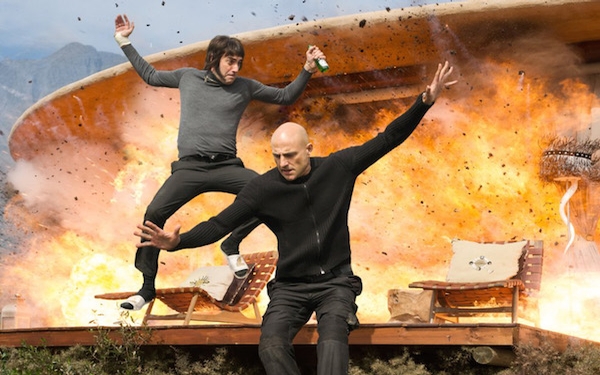 For the sake of comedy, Sacha Baron Cohen has risked arrest, lawsuits and grave bodily harm, but sitting down for an interview somehow seems more daunting.

It’s one thing to go out into the world and stir up trouble in the guise of outrageous characters like the moronic hip-hop poser Ali G or the bigoted Kazakh TV reporter Borat. It’s another thing entirely to do it as himself.

“I don’t think I’ve done a print interview for a decade — I might really end up regretting it,” Baron Cohen said on a recent morning in the Los Angeles production offices of his upcoming action-comedy “The Brothers Grimsby.” He smiled wryly. “Can I get you anything? A bottle of water? I’ve got to appear down to earth.”

He needn’t worry — though he’s responsible for some of the most daring high-wire comedy in recent memory, from the HBO series “Da Ali G Show” to films like “Borat” and “Bruno,” Baron Cohen, 44, comes across in person as affable and surprisingly normal. To protect his privacy and maintain the integrity of his characters, though, he has avoided revealing too much of himself in public over the years.

“To keep some anonymity has been challenging, but I love the idea that my characters are more famous than I am,” he said.

Still, the beast of celebrity occasionally needs to be fed so, with two new movies coming out in the next five months, Baron Cohen is doing his best to oblige. In “The Brothers Grimsby,” which opens March 11, he plays the buffoonish but kind-hearted estranged brother of a James Bond-like government assassin (Mark Strong). In the big-budget sequel “Alice Through the Looking Glass,” in theaters May 27, he portrays Time, a kind of half-clock, half-human villain who can travel into the past or the future. Aside from a cameo in “Anchorman 2,” they’re his first films to hit theaters since 2012 — hence a reintroduction seems in order.

Ever since he burst to fame in late 1990s, Baron Cohen’s career has moved along on parallel tracks. On one track are projects he has developed as vehicles for his particular brand of brazen, button-pushing satire. These have often involved inserting characters into cringe-inducing, sometimes perilous real-life situations: camping out with homophobic hunters as the flamboyantly gay Austrian fashionista Bruno, for example, or crashing the red carpet at the Oscars as the Kadafi-like despot he played in the comedy “The Dictator.” On the other, somewhat more conventional track are films — including “Talladega Nights,” “Hugo” and now “Alice Through the Looking Glass” — in which he has appeared as an actor for hire.

The latter come with less pressure and a far lower chance of suddenly needing to run from the police. But the former — “The Brothers Grimsby,” which Baron Cohen co-wrote and produced, being the latest — is clearly where his heart lies. “Doing other people’s films is like having a holiday for me,” he said.

Whichever type of project he’s working on, Baron Cohen deeply immerses himself in the role he’s playing. On “The Brothers Grimsby,” he stayed in character from the start of rehearsals until the end of the shoot. “He will speak in the accent, walk the walk and will only answer to his character’s name, Nobby,” said the film’s director, Louis Leterrier. “Yet he keeps his wits and smarts very sharp. He’s wickedly precise about the laughs.”

In prepping for a part, Baron Cohen likes to go undercover like a CIA operative to conduct research. While developing his “Brothers Grimsby” character, a die-hard soccer fan, Baron Cohen staged faux interviews in character with athletes and others who at least initially had no idea they were talking to an actor creating a role.

“We’d hire a hotel room in Los Angeles and, as Nobby, I’d interview a bunch of people one-on-one — generally people who were involved in professional sports but weren’t well-known,” said Baron Cohen, who grew up in a London suburb and now lives in L.A. with his wife, actress Isla Fisher, and their three children. “I’d be offering them cocaine or seeing if I could borrow their car. The idea is to make sure the character has some of the subtlety and reality of a well-developed character.” He laughed. “It’s a mad process. I should really be more lazy.”

“Alice Through the Looking Glass” director James Bobin saw the fruits of that process up close as a director and writer on “Da Ali G Show,” in which Baron Cohen interviewed unsuspecting marks — including prominent figures like Donald Trump, Newt Gingrich and Buzz Aldrin — in character. “When you are working in a real-world environment, you have to be an exceptional actor for people never to question that you are really (who you’re pretending to be) — and no one ever did,” Bobin said. “That stands as a true testament to Sacha’s skill.”

While he’s primarily known for comedy, Baron Cohen has also turned in more dramatic performances in films like “Sweeney Todd” and “Les Miserables” and spent six years trying to develop a biopic of Queen frontman Freddy Mercury before dropping out because of creative differences with the band. Among other projects, he is developing a musical comedy called “The Lesbian,” based on a real story of a Hong Kong billionaire who offered $65 million to any man who succeeded in marrying his lesbian daughter.

Doug Belgrad, president of the motion picture group at Sony Pictures, which is releasing “The Brothers Grimsby,” said Baron Cohen has the capacity to tackle a wide range of genres. “Sacha’s characters are not only conceptually audacious but brilliantly performed,” he said. “It’s no surprise that he’s also creating distinctive and memorable characters as a dramatic actor as well.”

Ironically, the one kind of project Baron Cohen can’t do anymore is the kind that made him famous in the first place. He is simply too recognizable at this point to pull off a guerrilla-style comedy like “Borat” or “Bruno,” particularly in a world connected by omnipresent social media.

“I miss it,” he said. “Being in a wild situation when you’re deep in character and nobody realizing you’re not real — that’s the ultimate adrenaline. But listen, I’m too old for it. You have to have the mindset that if something bad happens, everyone is going to be fine. I always received death threats, but they increased after ‘Bruno.’ You start feeling irresponsible when you have a family.”

Even if he felt up for it, in the wake of the 2014 cyberattack on Sony over “The Interview,” Baron Cohen thinks Hollywood’s appetite for edgy satires like “Borat,” which drew official condemnation from Kazakhstan, and “The Dictator,” which was censored or banned in several countries, has greatly diminished.

“If I walked in now and asked a major studio to make ‘Borat,’ I wonder if any of them would say, ‘OK, we’ll do it,’” he said. “And that’s a shame because essentially what North Korea managed to do was to create international censorship.”

Nevertheless, Baron Cohen is determined to keep making boundary-pushing comedies, whatever form they take. In his mind, it all goes back to when he was 8 and his older brothers sneaked him into a showing of Monty Python’s 1979 religious satire “Life of Brian.”

“That was one of the first comedies I ever saw in a cinema,” he said. “It’s probably why I’m so deranged now. I remember just laughing and being shocked and the audience convulsing.

“On some subliminal level, I think I’m trying to re-create that feeling. The audience isn’t thinking about their kids or their homework or ISIS. They’re having this collective experience, going on this wild ride. It’s hard because you’re always trying to outdo yourself. But that’s the bar.”