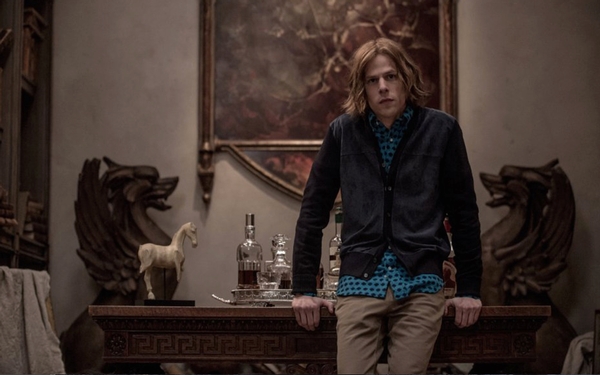 “I had a Mentos. Do you want one?” Perched in a glass conference room wearing a T-shirt with the sleeves hiked up, actor Jesse Eisenberg unrolls candy mints and makes polite conversation.

Eisenberg has just finished filming behind-the-scenes footage for “Batman v Superman: Dawn of Justice,” expanding on Luthor’s ancillary storyline that Warner Bros. dreamed up for his character’s immense corporation, LexCorp. It’s a behind-the-scenes look at the making of the SEO-friendly villain that will be used to market the film, which opens March 25.

Gone is the magnificent underground lair or ascot-heavy wardrobe, replaced with a Fortune 500-friendly progeny. This is the millennial Luthor, a deviation that Eisenberg dubs a relief. “When you’re doing a movie like this and playing a character that’s already been played, the further away it is from those previous incarnations the better,” Eisenberg said. “Because chances are, especially with a guy like Gene Hackman or Kevin Spacey, you’re not going to get favorably compared.”

When asked to explain Luthor’s new hairdo, Eisenberg would only joke about it. “Literally, there would be one of those Wile E. Coyote things where the piano drops from the sky randomly on his head. That’s what will happen to me.” Clearly Warner Bros. is protective of even the tiniest strand of spoilers in the latest addition to the franchise relaunch of the DC Comics movie-verse.

However, Eisenberg promises the patience will pay off, “When you see the movie, you’ll see. It’s the greatest scene that I’ve ever gotten to take part in — it accounts for the change in hair.”

Eisenberg is best known for portraying neurotic, verbal characters such as Mark Zuckerberg in “The Social Network” or the reporter interviewing David Foster Wallace in “The End of the Tour.” So the actor called stepping into the scoundrel spotlight a “liberating experience.”

He admits that playing an iconic role in a highly anticipated movie comes with a price.

“The only difference between this movie and everything else I’ve ever been in is this has an audience that has prior expectations, and that’s the only thing that I find disconcerting because it feels like some people are occasionally ready to get angry at me for the part they haven’t seen me play yet. It’s bewildering.”

Eisenberg’s Luther will still be a calculating force of evil, but like the new Superman that came before him in “Man of Steel” this is a chance to re-introduce and expand the classic character. So there’s going to be a bit of Luthor back story — a compelling reason for Eisenberg to take the role.

“The character has a core of reality,” Eisenberg explained. “(Luthor) has a back story that’s tragic and an emotional inner life that’s authentic. That’s in the movie. It was my interest in playing the character with a real emotional core, and this writer, Chris Terrio’s interest in creating a character that seemed viable in reality.”

In the film, Luthor becomes the physical catalyst for the epic battle between Superman and Batman. He’s the little “v” between Batman and Superman. He’s particularly worried about Superman’s powers — apparently Luthor isn’t keen on letting an omnipotent alien gain access to whatever he wants. That and a heaping messiah complex.

“To call him self-aggrandizing is to say that the Titanic was a sailboat,” Eisenberg said. “He is a narcissist of the first order but complicated in that way as well in that he is terribly troubled and competitive and vengeful. He looks at Superman not as somebody to destroy but as genuine threat to humanity.”

Despite Eisenberg’s empathetic connection to Luthor, “Batman v Superman” director Zack Snyder originally approached the actor for another part in the film. Snyder won’t reveal that character. “Let’s call it a secret, but nevertheless it was the exact opposite of Lex Luthor,” Snyder said, taking a break on the phone from drawing “Justice League” Aquaman in his storyboards. After Eisenberg declined, Snyder went back and offered him something “cooler,” the role of Luthor.

“I feel like once (Eisenberg) found out who Lex was he embraced it,” Snyder said. “Once you kind of start digging into Lex, it’s a bit of a scary thing to be that guy. I don’t think he just goes ‘Oh, I’ll just be that guy and then when I go home I’m not him.’ I think the thing with Jessie is he wasn’t immune to the reality of playing a super-scary character.”