Network moves ahead on ‘Thrones,’ which shows risk of adapting popular material 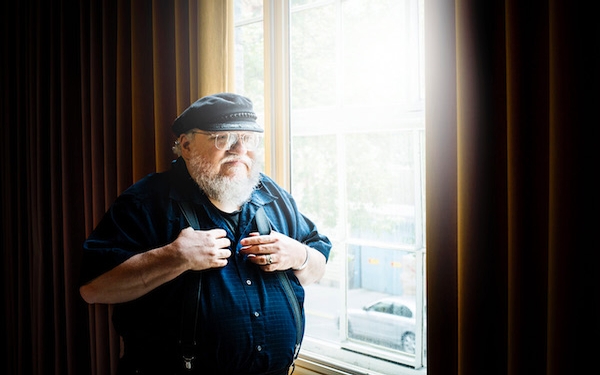 As any professional writer will tell you, missing deadlines can be a big deal, but it’s generally not cause for international headlines.

That is, unless you’re George R.R. Martin, author of the fantasy novels that inspired HBO’s gargantuan hit “Game of Thrones.” Earlier this month, the 67-year-old writer sent his obsessive fans into fits of hysteria by announcing he had yet to complete the long-awaited fifth installment of his “A Song of Ice and Fire” series. This means that when the Emmy-winning drama returns for a sixth season on April 24, the narrative will move ahead of Martin’s published books.

And it will keep on moving: On Thursday, HBO Programming President Michael Lombardo told reporters at the winter gathering of the Television Critics Association that the premium cable network was close to a deal for seasons 7 and 8 of the series.

By surpassing their source material in such dramatic fashion, show runners David Benioff and D.B. Weiss are in a sticky situation without precedent in the television business, one that has stoked concerns the series will now “spoil” Martin’s remaining books, and raised thorny questions about creative authorship.

So far the network has had no comment on the matter, but there can be little doubt it’s caused some anxiety. Since premiering in 2011, “Game of Thrones” has become a vital asset for HBO. It is the most-watched program in the network’s history, with an average of 20 million weekly viewers in its fifth season, and one of its most acclaimed, winning the Emmy for drama series along with 11 other Emmys in September and setting a record for awards won by a series in a single season.

The “Game of Thrones” predicament, rare though it is, highlights the many complications that arise when adapting television series from popular books or other well-known source materials — an increasing phenomenon in an age when more and more outlets are dabbling in ambitious scripted drama¸ from AMC’s zombie blockbuster “The Walking Dead,” sprung from Robert Kirkman’s comic books, to HBO’s somber “The Leftovers,” based on Tom Perrotta’s book about a rapture-like event.

Though it may be the most glaring example, “Game of Thrones” is not the only current series whose faithfulness to — and occasional deviation from — its source material has sparked heated debate. Starz’s adventure series “Outlander” follows the sometimes harrowing adventures about a WWII nurse who travels back in time to 18th century Scotland and is based on a series of books by Diana Gabaldon.

Heading into its second season, “Outlander” has so far mostly delighted fans of the novels. The first season closely followed the first book in the series, also called “Outlander,” and even included two controversial scenes of violence that had polarized readers since the publication of the first book in 1991.

Adaptations can be a blessing and a curse, according to showrunner Ronald Moore. “You’ve got a road map and you’ve always got the confidence you know where you’re going,” Moore said. “The challenge is when you get to frustrating places, you don’t have the luxury of saying … let’s throw the whole thing out.”

Spoilers can also be a concern for shows like “Outlander,” based on texts published years or even decades ago. “Outlander” came out in 1991, meaning that viewers who wish to remain unsullied have to tread lightly online. The same has been true for “Game of Thrones,” with book readers often delighting in their knowledge of future plot twists — most infamously, by recording newbies reacting in horror to the “Red Wedding” episode, in which several key characters were brutally killed.

Now the situation is reversed.

Another challenge, according to Moore, is keeping the material fresh and surprising to dedicated readers of the books. “Sometimes it’s how you deliver the twist, you give it to them in a different way or change up the chronology a little bit,” said Moore, who divides his writers room between book readers and newbies. He also consults frequently with Gabaldon, who tells him about particular lines or scenes that resonate with her fans while alerting him to changes that could have unintended consequences on the narrative down the line.

In contrast, AMC’s “The Walking Dead” long ago departed from Robert Kirkman’s comic books, keeping many characters alive and intact who were killed or maimed in the source material. Meanwhile, Daryl Dixon, the tenderhearted redneck played by convention hall demigod Norman Reedus, was created for the television series but has become its most untouchable character.

Executive producer Gale Anne Hurd told The Times last year: “The show has expanded the readership of the comics, so it’s now a feedback loop. And just because the comic book readers might not number in the millions doesn’t mean they’re not important.”

On the nonfiction front, there’s Showtime’s “Masters of Sex.” Michelle Ashford oversees the Showtime drama, adapted from Thomas Maier’s nonfiction book of the same name, about the renowned sex-research team Masters and Johnson, who also carried on an affair for years before marrying. In addition to the normal thorny process of adapting someone else’s work, Ashford has the added headache of dramatizing the private lives of public figures from the recent past.

Said Ashford: “You have to weigh so many different elements. What do people expect? How do you keep the thing accurate and true to the spirit but also create something that works dramatically?”

Ashford recalls her initially giddy response to Maier’s book, which seemed to provide such rich drama and more than enough fuel for several seasons of television: “When I read that book I was almost embarrassed, I was like, ‘Half my work is done.’ Then there’s the flip side of ‘OK, wait a minute, we’re dealing with actual events and real people and real times in history.’”

Another worry unique to series television is how to divide a finite amount of story between an undetermined amount of seasons. Television shows, un-like movies, get renewed (ideally anyway) but “you don’t want to drag it out forever,” said Ashford, who envisions six seasons of “Masters of Sex.” “It lets out all the air from the dramatic structure.”

The issue of spoilers is just as acute for a fact-based show like “Masters of Sex,” where a five-second scan of Wikipedia can reveal the story’s ending. “The ‘what happened?’ cannot be the thing that propels it dramatically. It has to be the ‘how did it happen?’” Ashford said.

Even without the complications created by Martin’s missed deadline, Weiss and Benioff faced a Herculean feat in adapting the author’s sprawling books, which, like the works of J.R.R. Tolkien, are dense with mythology, feature hundreds of characters — human and otherwise — and have attracted fans who are passionate, obsessive — and occasionally unforgiving.

As Martin has missed deadline after deadline, fans have voiced their displeasure online, often criticizing the bearded writer for his involvement in other projects — even for writing occasional episodes of the TV series.

The news that the series would move past the books is not exactly a surprise to those who’ve followed Martin’s progress — or complained about the lack thereof — in recent years. By his own admission, Martin is a slow writer, and his books are massive, usually clocking in at over a thousand pages; the last novel in the series, “A Dance With Dragons,” was published five years later than originally planned.

“The Winds of Winter” isn’t even the last book in the series; Martin has at least one more planned, called “A Dream of Spring.” The resulting anxiety has been so acute that Weird Al Yankovic even joked about it during a musical bit at the 2014 Emmys.

“Type George, type as fast as you can, we need more scripts,” he sang, as host Andy Samberg delivered the author, who was in the audience, a typewriter.

The panic may be overblown; it’s not as if Benioff and Weiss are flying blind. In 2014 the writers told Vanity Fair they’d met with Martin to discuss the ending of the saga and plot the seasons ahead. At the time, Martin said he’d already worked out the broad strokes of the story, if not the precise details.

“If you know the ending, then you can lay the groundwork for it. And so we want to know how everything ends. We want to be able to set things up. So we just sat down with him and literally went through every character,” Benioff recalled.

In his message last week, Martin acknowledged it was a unique situation for a television series to outpace the books on which it’s based, but urged fans not to freak out.

“You might prefer one over the other,” he wrote, “but you can still enjoy the hell out of both.”