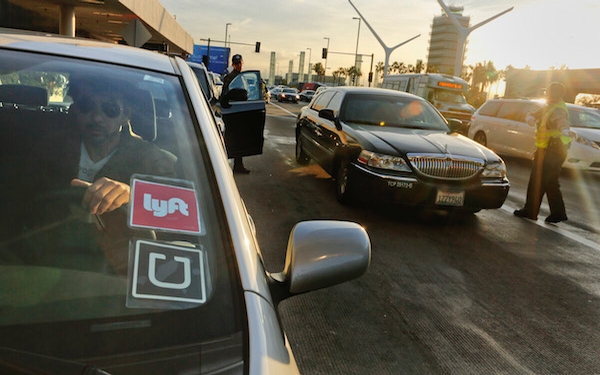 From January 2014 to January 2015, Lyft grew fivefold in rides and revenue. Above, a driver for Lyft and Uber at Los Angeles International Airport last month. (Mark Boster/Los Angeles Times/TNS)

SAN FRANCISCO — It’s Saturday night in San Francisco’s Mission District. Two women stand outside a dive bar in the winter chill, looking at their phones. Two Toyota Priuses pull up to the sidewalk.

“Yo, you Kelly?” a driver yells to the taller of the women.

“No,” she says, glancing up from her phone.

“I’m Kelly!” the other woman calls out.

The taller woman walks to the door of the other Prius.

“You Rachel?” the driver says.

The women climb into their respective rides. The Priuses pull away.

A year ago, Uber dominated San Francisco. As in many cities, “Uber” had become a verb for ride-hailing apps. But today, you’re as likely to spot a Lyft as an Uber in this city.

Those who thought on-demand transportation was a winner-take-all market — that Uber would crush competitors in ride-hailing the way Facebook crushed competitors in social media — are being forced to change their tune.

It turns out that the winner-take-all phenomenon that drives so much of the Internet — a theory also known as “network effects” — may not be as relevant to the transportation industry.

Last month, struggling ride-hailing company called Sidecar pulled out of the ride-hailing business. But Lyft’s business continues to improve, and it remains an investment magnet. Earlier this month, the company announced a new $1 billion funding round, led by General Motors, which invested $500 million.

From January 2014 to January 2015, the company grew fivefold in rides and revenue. It’s on track for $1 billion in gross revenue by October this year.

Which isn’t to say Lyft is about to eclipse Uber.

Lyft is valued at $5.5 billion. Uber’s most recent valuation is $62.5 billion. Lyft has 315,000 drivers. Uber has more than 400,000 in the U.S. alone. Uber is available in 68 countries. Lyft operates only in the U.S.; its international expansion into Asia through partnerships isn’t due to begin until next year.

Despite the gulf in resources between the industry’s number one and two, Lyft continues to grow.

“People thought that this was a winner-takes-all market, and I think everyone’s realized that’s not the case,” said Lyft’s co-founder and president, John Zimmer.

Pundits got it wrong, he believes, because winner takes all is such a common scenario in tech. In social media, Facebook came out on top because of the network effect: The more of your friends are on it, the better it gets. That naturally lends itself to one player.

“But in a transportation business, specifically our business, there are very strong network effects, but only to a point,” Zimmer said.

“But once you hit three minute pickup times, there’s no benefit to having more people on the network,” Zimmer said.

In fact, according to economist W. Brian Arthur, a prime theoretician behind network effects, if all services are equal, then network effects may not be so advantageous.

“For example, Uber might have a strong network advantage in an area, but if Lyft comes in and offers a much better product, it can dislodge a company, network effects and all,” Arthur said.

“Network effects are a dynamic idea. They’re not frozen in time. They do exist, but it doesn’t mean someone can’t come along and just leapfrog that.”

Zimmer likes to compare the dynamic between Uber and Lyft to AT&T and Verizon. When both cell networks hit three bars of coverage, people start to see them as equivalent, and base their spending decisions on other factors, such as brand values and customer experience.

That’s what Lyft has spent the last year doing: building the ride-hailing equivalent of cell towers to get pickup times down to three minutes or less.

With that out of the way, it’s out to capture market share, by attracting passengers who want an alternative to Uber and tapping into the ocean of people who have never used a ride-hailing service.

For its international expansion, Lyft has partnered with incumbents in markets such as China, India and Southeast Asia, so when U.S. Lyft customers open the app while overseas, they can hail a ride from local operators such as Didi Kuaidi (China) and Ola (India), and vice versa.

The company will tackle each geography differently.

But Lyft’s domestic strategy interests big investors the most, with activist billionaire Carl Icahn investing $100 million in the San Francisco company, telling the New York Times in May: “There’s room for two in this area.”

Scott Weiss, a Lyft board member and partner at venture capital firm Andreessen Horowitz, echoed a similar sentiment, comparing the on-demand transportation market to airlines, with the potential for it to be even bigger.

“There are probably 10 to 12 airlines that have multibillion-dollar valuations, and every country has one or two flagship carriers,” Weiss said. “We always bet the market is humongous.”

Although it’s unclear how much market share a company would need to be financially successful — Uber is, after all, only 5 years old; Lyft is 3 — there’s a big chunk of the transportation pie up for grabs.

Which is why the on-demand companies are knuckling down now.

Uber has spent $1 billion in China and India to expand its business, and was the first on-demand transportation service in hundreds of U.S. cities. Leaked financial documents show Lyft spent $96.1 million on marketing in the first half of 2015, more than twice its net revenue in the same period.

Under the guidance of marketing chief Kira Wampler, the company underwent a brand redesign in early 2015, scrubbing clean traces of the fluffy mustache in favor of a sleeker, more sophisticated look. It covered San Francisco with billboards, bus shelter ads and posters plastered down the sides of buildings. The Lyft app recently underwent a complete redesign to offer users more transparency and predictability in its ride pricing.

And its message to potential customers? “We treat you better.”

Although passengers anecdotally have had both great and nightmarish experiences with Lyft and Uber drivers, Lyft believes that because its platforms enable customers to tip drivers (Uber’s app doesn’t have such a feature), drivers are, in theory, incentivized to offer a better service.

When Lyft launched, it also encouraged passengers to ride in the front and to greet drivers with a fist bump. And though it no longer stipulates how passengers should ride, Wampler believes the culture fostered in the days of the fist bump has stuck around, resulting in a more social and fun experience.

According to Weiss, Lyft has cornered the millennial market, a kind of Southwest Airlines (fun, friendly and social) to Uber’s Virgin America (more serious and luxurious).

Although Uber first positioned itself with its black town cars as a service for professionals and UberX as a service for everyone, Lyft has capitalized on a segment of the market that isn’t satisfied with the Uber experience, said Hugh Tallents, partner at brand strategy firm CG42.

“Uber has in many ways created the category, and with that comes some serious frustrations that Lyft is looking to solve,” Tallents said.

Lyft, for example, has a cap on its surge pricing, whereas Uber fares have been known to increase dramatically during busy periods, a frustration for many passengers. Lyft has also created the perception of better driver advocacy, with the ability for riders to tip, and by encouraging passengers to interact with the driver, Tallents said.

“It makes it a much more human interaction, and I think people have been craving that,” he said.

If Lyft can capture 75 percent of the millennial crowd, it will be in a good position for the long term, even if Uber continues to dwarf it, Weiss said.

“This is a market that’s going to float at these two ships,” he said of Uber and Lyft. “But where Uber stands to lose is the millennial market. Lyft is too consistent. They service that market too well.”