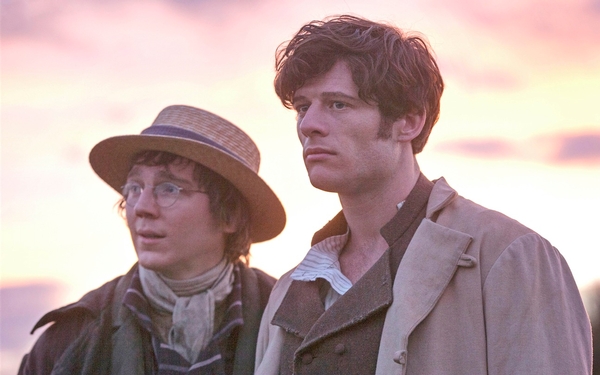 James Norton doesn’t like to stay in one place for too long, to “sit still and veg.” Like the characters he plays, the British actor says he’s a searcher.

“I definitely am an inquisitive person by nature,” Norton said. “If I have a spare moment … I will always get up and go out and find something to do and explore. So I’m very much a searcher and quite an active person. I can’t do the passive thing.”

The 31-year-old sat long enough for an interview at the Television Critics Association winter press tour in Pasadena, Calif., to promote “War and Peace,” which is now airing simultaneously on Lifetime, A&E and History.

Set against the backdrop of the Napoleonic invasions, the four-night miniseries adaptation of Leo Tolstoy’s classic novel follows the ups and downs of five aristocratic families in the waning days of imperial Russia. Among its stars are Gillian Anderson, Paul Dano, Lily James and Jim Broadbent.

Norton plays Prince Andrei Bolkonsky, Tolstoy’s cynical hero and a man who has everything but remains perpetually dissatisfied.

“He’s disillusioned,” Norton said. “He’s searching for something. I’m not quite sure what it is. He tries all these different avenues and doesn’t quite reach any kind of resolution or fulfillment.”

As the action begins, a not-so-loving Andrei dumps his pregnant wife with his sister and father to find glory on the battlefield. Meanwhile, Andrei’s best friend Pierre Bezukhov (Dano) becomes St. Petersburg’s most eligible bachelor when his father dies and leaves his illegitimate son a fortune.

When Andrei returns from war embittered and shattered by tragedy, the captivating Natasha Rostova (James) gives him hope for the future. But as Norton says, Andrei is not good at love.

“He doesn’t really know how to love,” he said. “He loves in a very selfish way. It’s all about what it brings to him. I’m sure everyone’s had a moment in their life where they’ve been selfish in a relationship.”

“War and Peace,” directed by Tom Harper from a script by Andrew Davies, is filled with love and loss, romance, scandal, passion, deceit and betrayal. It’s no surprise that Norton likens it to an epic soap opera.

“It’s basically lots of different characters exploring love,” he said. “It doesn’t really matter that it’s set in 1805 because it is timeless. The beautiful thing about Tolstoy’s characters is that they’re all so recognizable and sympathetic.”

Co-produced by the Weinstein Company and BBC, the lavish production was filmed in Lithuania, Latvia and Russia. The Amber Room in the Catherine Palace outside St. Petersburg was used to film a ball scene. Filming the battle scenes with 300 extras on horseback, Norton said, made him feel like an 8-year-old.

The production did have two major challenges, though. The series was not shot in chronological order, so some days the actors would be filming a scene set in 1805 St. Petersburg in the morning and 1812 Borodino in the afternoon.

“It was completely discombobulating,” Norton said, adding that a second challenge also put him off balance. Playing an officer in the imperial Russian army required Norton to wear a tall, unwieldy hat.

“They were huge,” he said, despite praising the Lithuanian costume crews for their brilliant work. Crew members had to pack tissue between the hat and Norton’s heavily permed hair to stop the sweat from rolling onto his face.

“The hats were obviously authentic in the shape and size, but the question is, ‘How on earth did they fight in those things?’”

Norton studied theology at Cambridge University with no designs to become a vicar before studying acting at the Royal Academy of Dramatic Art. Now he seems to be drawn to characters who are always looking for fulfillment.

“I think they’re all looking for some sort of resolution,” he said. “I think everyone’s trying to work it out to some extent and I think what’s a great privilege as an actor is that you get to spend a bit of time in these head spaces.”