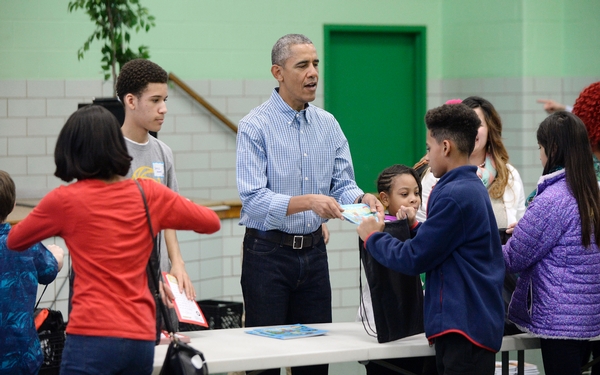 WASHINGTON — Despite Republican majorities in Congress through much of his tenure and increasingly insistent calls from GOP presidential candidates to rein in “free stuff,” President Barack Obama has engineered the largest expansion of the federal government’s safety net in half a century, a record he cemented further as he closed out his seventh year.

The growth of social welfare programs, including health insurance — though sometimes overshadowed by immigration and other partisan issues — is shaping up to be a central issue in the campaign to succeed Obama. Republican presidential hopefuls have called for rolling back much of what Obama has done, while Hillary Clinton and the other Democrats want to go further.

The latest expansions came in the $1.8 trillion budget deal that Congress approved last month, which made permanent hundreds of billions of dollars in tax breaks for low- and moderate-income families and boosted aid for college students.

The tax credits have received much less public attention than other social-welfare spending, including the Affordable Care Act, but they have become the government’s largest cash-assistance program to fight poverty, with more than 40 million people receiving benefits each year.

The assistance was broadened on a temporary basis, mostly in Obama’s first year. Making that expansion permanent will help at least 16 million people, according to estimates from the Center on Budget and Policy Priorities, a left-leaning Washington think tank.

That “would rank among the biggest anti-poverty achievements, outside of health reform, in years,” said Robert Greenstein, the center’s executive director.

The expanded aid for low-income Americans reflects Obama’s belief in leveraging government power to combat income inequality, which he has called “the defining challenge of our time.” Even with the expanded aid, the U.S. tax system provides far more benefits to wealthy Americans than it does to the poor, a point frequently cited by liberals.

Obama’s ability to lock in and even expand his social programs despite Republican congressional majorities has fueled a fury among conservative voters that many direct against the GOP leadership, whom they accuse of repeatedly surrendering to the White House.

After the budget deal, House Speaker Paul Ryan, R-Wis., was forced to defend himself against such critics. “We fought for as much as we could get,” he said on NBC’s “Meet the Press.” “We’re going to pick up next year … and keep going for more.”

Congressional Republicans’ 2016 budget blueprint — which provides an outline of the party’s governing vision — proposes hundreds of billions of dollars in cuts to Medicaid, food assistance and other programs for the poor.

Many Republican politicians argue that costly government programs such as those Obama has pushed are stunting economic growth, depressing wages and creating a “culture of dependency.”

That argument has proved extremely potent, helping deliver historic GOP majorities in Congress and animating the campaigns of many of the 2016 GOP presidential contenders.

But Republicans have been unable to use their majorities to reverse the growth in social programs, as the year-end budget deal underscored.

In addition to the tax benefits for low-income families, the deal, which gained support from majorities of Democrats and Republicans, also boosted federal aid for low- and middle-income college students through increased grants and tax breaks.

Moreover, it protected the core of the president’s signature Affordable Care Act, although it delayed three taxes included in the law.

The 2010 health care law has extended government-subsidized health coverage to millions of poor and working-class Americans in the last two years.

To many Republicans, the failure to repeal it marks the most notable lapse by the GOP leadership. Today, as the law’s coverage expansion enters its third year, close to 20 million low- and moderate-income Americans rely on health insurance provided through the law, including state Medicaid programs for the poor and subsidized commercial insurance available on HealthCare.gov and other government-run insurance marketplaces.

That expansion has driven a historic decline in the nation’s uninsured rate, dropping the share of adults without insurance from 18 percent at the end of 2013 to 11.6 percent in the third quarter of this year, according to national surveys from Gallup.

The number could continue to fall as additional conservative states, including Louisiana, South Dakota and Wyoming, look for ways to expand their Medicaid programs in 2016, following the 30 states that already have used the law to broaden coverage.

Some Republicans had publicly said that after years of laboring unsuccessfully to derail the health care law, they would use this year’s budget process to wipe out major parts of it.

In the end, however, the year-end budget deal only temporarily suspended taxes on health insurers and medical device makers. It also delayed a tax scheduled to take effect in 2018 on health plans that provide very generous benefits, a delay sought by some congressional Democrats and labor unions that negotiated the benefits for their members.

Many economists see the tax as a crucial tool for restraining the growth in overall health costs, and dropping it was resisted by the White House and architects of the health care law, who had fought to include it in the bill.

But though the budget deal only delayed the so-called Cadillac tax for two years, it made permanent the expansions of the Earned Income Tax Credit and Child Tax Credit — which provide annual tax refunds of as much as $6,000 to working-poor households, including those who do not owe any income tax. The expansions were scheduled to expire in 2017.

College students also got a boost, as Congress voted to increase the maximum Pell Grant to $5,915. That is up 25 percent from when Obama took office, though college tuitions continue to skyrocket.

Low- and moderate-income students can qualify for additional assistance through the permanent extension of the American Opportunity Tax Credit, which was also included in the year-end budget deal.

The college tax credit provides up to $2,500 for tuition or other education expenses. It was also scheduled to expire in 2017.