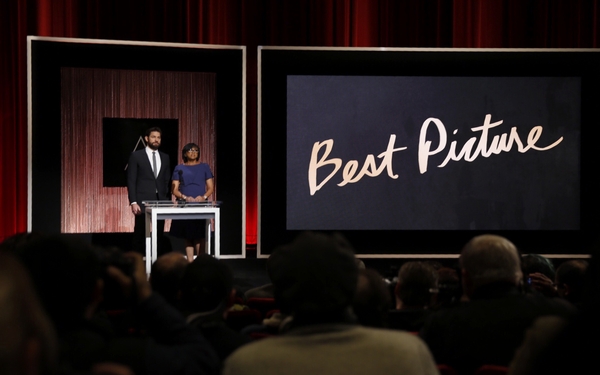 The winner of the 2016 Oscar in practically every category is … white men facing adversity.

Just two years after the much-touted breakthrough of “12 Years a Slave,” the best picture nominees announced Thursday, with a few notable exceptions, follow a dishearteningly repetitive story line of white men triumphing over enormous odds: The Hollywood blacklist (“Trumbo”), the vagaries of Wall Street (“The Big Short”), Cold War politics (“Bridge of Spies”), life alone on Mars (“The Martian”), a grizzly bear attack, murderous companions and the hostilities of a cruel winter landscape (“The Revenant”).

Even “Spotlight,” with its supporting actress nomination for Rachel McAdams, showcases a group of mostly male journalists struggling to expose the brutal crimes committed by the Catholic Church. And though there is feminine power aplenty in “Mad Max: Fury Road,” the film’s titular character is, of course, Max, and its lead actress didn’t even get a nomination.

To be clear, these are all good stories, powerful, well told and beautifully acted. But in world filled with billions of people who are not white men, they are certainly not the only good stories, not by a long shot.

Though our demographics and attitudes continue to change, Hollywood’s definition of great drama has remained stubbornly attached to standards and expectations set back when men were men (if they were white) and everyone else needed to just shut up and listen.

Obviously, plenty of films have challenged this sensibility, telling a wide variety of stories from many points of view. But when it comes to Oscar bait, the default remains too often set at literal reading of the four essential categories of conflict: Man versus man, man versus nature, man versus society and man versus himself. As many have already pointed out, the characters in the lead actor category were a writer, scientist/astronaut, tracker, inventor and artist. The characters in lead actress? Homemaker, mother/rape survivor, inventor, wife, clerk.

Film is not the only narrative art struggling with a limited notion of excellence. The publishing industry is in the midst of a long-standing battle over why certain writers (mostly white men) are considered “significant” while others (often women, white and otherwise) are dubbed “popular.”

With its increasing number of platforms, television has done a better job in recent years of expanding its repertoire of characters and stories, but the “prestige dramas” of premium and basic cable remain almost as fascinated with the perils and problems of white men as film. Of recent Emmy winners in drama, only “Game of Thrones” gives equal emphasis to its female characters.

Ironically, television has benefited, and will continue to benefit, from film’s increasingly narrow focus. There are many reasons for TV’s recent renaissance, but it certainly began when female film stars, unable to find good roles, left the big screen for the small. Film writers, unable to sell stories outside the prescribed margins, soon followed.

Although there are still too few women and people of color writing and directing television, there are far more than in film. The nominees for virtually every category that was not lead or supporting actress included only a scattering of women. And director Todd Haynes, who in “Carol” told a lovely and lyrical story about two women, was shut out of his category and the best picture group.

Before chalking all this up to a discussion of political correctness, Hollywood should take note that there is money at stake.

The movie and TV industries won’t solve their main problem — how to capture the eyes of young audiences — by hewing to hallmarks of excellence set by previous generations. Millennials and post-millennials aren’t just big franchise fans, they are also the most racially diverse and socially tolerant generations in history. As the crossover audiences for “Straight Outta Compton” and “The Hunger Games” series proved, they don’t “need” their heroes to be white and don’t expect them to be male or straight or anything but interesting.

So instead of panicking about the logistical challenges of the digital era, Hollywood should remember its own time-honored mantra: What matters is the story. The size and shape of the screens are, to a certain extent, outside the entertainment industry’s control. What is playing on them, and how much it moves the audience, is not.

“Diversity,” the lack of it and need for it, has been discussed and debated ad nauseam. But diversity isn’t a civic duty, it’s an artistic necessity. For any art form to remain relevant, it must grow with the society it explores, questions, criticizes and represents.

Yet here we are, with white men braving storms both real and symbolic, in the hostile landscapes of several states, two countries and a distant planet to win the Oscar gold.