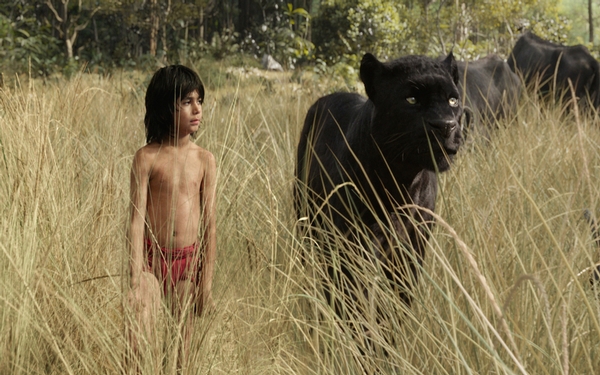 In a downtown L.A. studio in late 2014, Jon Favreau was watching a computer-generated panther walk on a giant monitor while behind him crews hammered together a bear cave set.

Favreau was on the set of his new film, “The Jungle Book,” a hybrid of live action and animation that Disney will release April 15. The movie, from a screenplay by Justin Marks, straddles two centuries as the photo-real, digitally created animals deliver lines of prose Rudyard Kipling first wrote in 1894.

In mood, it draws on Disney’s whimsical 1967 animated version of “The Jungle Book,” which won over audiences with a singable Sherman Brothers soundtrack and appealingly cartoony characters.

For Favreau, the 49-year-old director of the big-budget Marvel movies “Iron Man” and “Iron Man 2” and the low-fi indie hit “Chef,” directing “The Jungle Book” is an opportunity to develop his 21st century filmmaking skills while relying on some of his strongest old-school abilities, namely a knack for casting and tone.

“We never want to make the animals express emotions in ways that their species doesn’t,” Favreau said at the time, explaining why his CG panther doesn’t ever furrow his brow. “How do you make it real? You hold a mirror up to nature. We have the breathing, the fur, the way the muscles move over the skin. The real challenge is to take all of this technical stuff and make it into an emotional experience.”

Favreau and his casting director selected newcomer Neel Sethi, a charismatic 12-year-old from New York City, to play the movie’s only human character, Mowgli, a boy raised by wolves. While the 1967 film featured expressive performers like Louis Prima and George Sanders in its voice cast, the new “Jungle Book” surrounds Sethi with an impressive group of contemporary voices, including Bill Murray as Baloo the bear, Ben Kingsley as Bagheera the panther, Idris Elba as tiger Shere Khan, Scarlett Johansson as Kaa the python and Christopher Walken as King Louie, who is modified from a chimpanzee in the 1967 film to a gigantopithecus, an extinct creature that was native to Kipling’s India setting.

While their voices are human and — particularly in the case of Walken — unmistakably specific, their characters are nearly photo real.

For Favreau, who dabbled in CGI on the first two “Iron Man” films, the technologically driven project has meant developing a new comfort level with visual effects. On his earlier movies “Elf” and “Zathura,” Favreau had steadfastly stuck to practical techniques like stop-motion animation and forced perspective.

“I’ve always been very resistant to dive into CGI,” Favreau said, citing his fears of the “uncanny valley,” an effect where computer-generated human characters cause a response of revulsion in an audience. But, impressed by advances in computing power and techniques and by the work on films like 2011’s “Rise of the Planet of the Apes” and 2009 “Avatar,” he felt emboldened to take on a classic tale with new tools. (As the idea to update “Jungle Book” using digital tools occurred to Disney, it also occurred to another giant media company in Burbank, Warner Bros., which has a similar feature film underway, “Jungle Book: Origins,” with Andy Serkis at the helm and scheduled for release in 2017.)

“I tend to like puzzles and get obsessive about details,” Favreau said at his Playa Vista offices. “So in that sense, directing this way suits me. We made the animated version of the movie, the live action version, the motion-capture version. This kind of movie is like a marathon, not a sprint.”

Nevertheless the new form brought new questions — “How do you create the spontaneity and chemistry in a medium that’s very rigid? How do you talk to visual effects artists? How do you set the tone?” Favreau said.

He enlisted songwriter Richard Sherman, now 87, to revisit and update some of the memorable songs he wrote with his brother — “He loved the word ‘gigantopithecus,’” Favreau said of Sherman.

Favreau declined to specify how many songs are in the film, saying, “We tried to incorporate enough of the music to meet the expectations of the audience without making it a full-on musical.”

His ultimate aim, Favreau said, is to create not just a movie but a transporting experience.