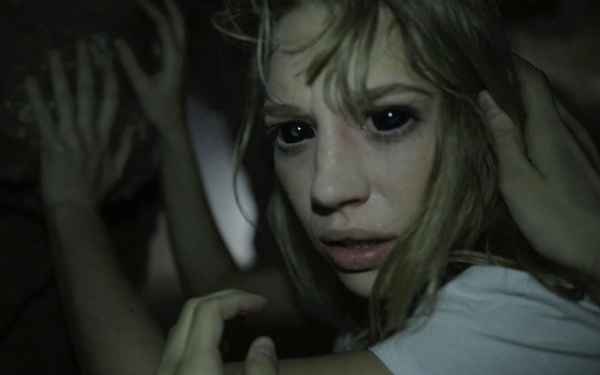 What happens when a demon, a zombie, and a fairy walk into a bar in Jerusalem? If you guessed that everybody walks out of said bar as some wild concoction of the three, you’d be be describing JeruZalem, the latest first person horror zombie apocalypse film that, while being wildly predictable, yields enough sustainable qualities to keep you near the edge of your seat till the credits roll.

As the latest project from the Paz brothers, Doron and Yoav, JeruZalem is probably nothing to write home about, yet somehow manages to leave a sense of bewilderment on the tip of your tongue. These are the same guys who brought you Phobidilia, an exploration of a man who relies, far too deeply, on the cushions of technology to solve his problems. While JeruZalem may not turn to gizmos and gadgets as its main source of conflict or resolution, it certainly incorporates that world into its main focus of this particular horrific zombie takeover of the most holy land.

It all begins when Sarah (Danielle Jadelyn, Awake) is gifted a fresh pair of Google Glass from her father before her vacation to Tel Aviv. Invigorated by the prospects of the new technology as she picks up her best friend Rachel (Yael Grobglas, Jane, the Virgin), the journey to the holy land only seems like a paradise on the horizon. But when they land on foreign soil and meet Kevin (Yon Tumarkin), a young anthropologist who is admittedly far too flirty to really be flirty, Sarah finds his looks to be enough to change their travel plans. Instead of Tel Aviv, their sights are now set on Jerusalem, a place that Kevin is convinced is about to be the epicenter of a phenomenon. And so they set off on an adventure abroad, where cool hostels and friendly locals welcome them with open arms… until a dark force that has been simmering under the ancient grounds of Jerusalem begins to boil to the surface. Zombie demons are terrorizing the Holy Land, and everyone within its stone walls are locked in in the hopes of isolating further infection. What that really means, however, is every man for himself.

From its opening scene—an old videotape alluding to some reawakening of the dead decades before in Jerusalem—we the audience get an immediate sense of the dread that lies ahead of our protagonists. Though we mainly are watching the beautiful and rambunctious Rachel going through the motions of a zombie take over, it’s all through the perspective of Sarah, and more specifically, her Google Glass platform. While the technology didn’t lend much of a hand to the narrative as one might like or at least expect, the elements of facial recognition, maps, and video game simulation add a unique take to the first person perspective that we so often see in horror movies.

While Danielle Jadelyn does a fine job as Sarah the main hero, sometimes making those frustrating decisions that are easy to yell “don’t do that, RUN!” at the screen, its really Yael Grobglas that leads the story into absorbing waters. Rachel’s the classic American girl abroad, looking to hook up with hot guys and party all the time, but what she really becomes is the foil to Sarah’s character. We know Sarah cares about her the most, and its by following at her heels that we come to know both in a more meaningful way, and thus are more impacted when s**t hits the fan.

We of course have to talk about the monsters themselves. Though the element of horror seems rather subdued as a whole, leaving us craving to scream way more than we actually did, the few times the zombies rock a scene, they do it in a pretty terrifying way. As if flesh-eating creatures weren’t enough, them sprouting wings is just plain scary. What was left in the dust was the origin of these creatures and exactly why this was all happening at this particular point in time.

So, while JeruZalem leaves a bit to be desired in terms of its monster moments and its somewhat lackluster lead, the Paz brothers do a considerably solid job in an oversaturated genre. Now we can only look forward to their next project that will surely be a step in the same upward motion they are headed.

JERUZALEM is in theatres now and on VOD! For theatre locations or to watch on VOD, visit http://bit.ly/1PrjcNr