University of California struggles to add staff and housing 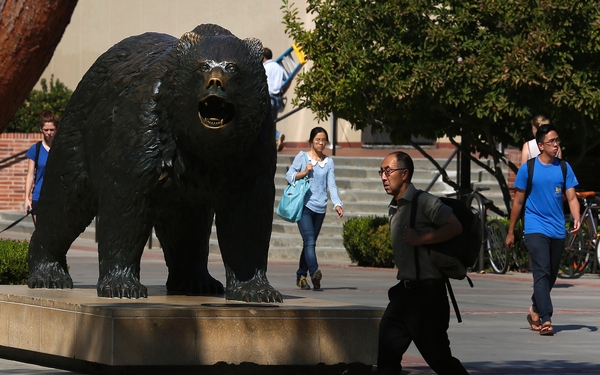 The University of California is scrambling to make room for the largest enrollment boost of California undergraduates in years — 6,500 more for the fall 2016 term, with the most selective campuses taking the most new students.

UCLA, Berkeley, San Diego and Riverside will each accept 750 more students this year; systemwide, nearly 14 percent more state residents are expected to gain admission. That’s good news for nervous high school seniors and transfer students who competed against 206,000 others in another record-shattering year for UC applications for 2016.

“A key priority is to ensure this housing is and remains affordable to UC students,” Napolitano said at the UC Regents meeting in San Francisco. “Many of our campuses are located in some of the most expensive real estate markets in California.”

In November, the regents approved Napolitano’s plan to boost enrollment of California students by 10,000 over the next three years, a response to criticism about the rising number of students from other states and countries taking UC seats. Out-of-state students pay triple the $12,200 in annual tuition that Californians pay.

The Legislature approved $25 million for an additional 5,000 undergraduates this fall, but UC officials will actually admit 6,500 because enrollment dipped last year from 2014, the baseline year for the increase, according to UC spokeswoman Dianne Klein.

The funds, however, will pay for less than half the cost of educating the students. That prompted concerns at the meeting that educational quality could decline without more dollars.

Daniel Hare, a UC Riverside professor and chair of the Academic Senate, fretted that students could be deprived of more intimate, hands-on learning opportunities in teaching labs and performance studios that he said were crucial supplements to lectures.

“You’re slowly filling the balloon, and eventually it’s going to pop,” he said. “Everything we need to maintain for quality requires a commitment for resources that faculty are concerned are not being made.”

Mohsin Mirza, UC Student Association undergraduate committee chairman, told the regents that it was “highly irresponsible” to accept more students without making sure they had proper housing, classes, mental health services and other support.

He said one student was sleeping in the living room of his university housing, sharing space with two other students.

Julia Schemmer, a first-year UC Riverside student, said students are sitting on floors at her campus because classrooms are so crowded. Riverside is undergoing a faculty expansion, however, to lower class sizes from the high 20s to the low 20s, according to Provost Paul D’Anieri.

Officials at individual campuses also expressed concerns about how to pay for needed support for all the new students.

“The state is saying they want affordability but more access. Those are the marching orders we’ve been given, and we’re doing everything we can to make sure that that’s done in a way consistent with our goals for academic quality,” Olsen said.

She said she hoped to accelerate the timetable for the new beds, with new construction and purchase of existing property largely financed by outside parties.

In other actions, Napolitano asked that a proposal for an 8 percent increase in supplemental tuition for professional degrees in nursing be tabled for further study after several regents raised questions about it.

Several regents also pressed UC officials for greater efforts to expand the number of African-American, Latino and other underrepresented students at UC.