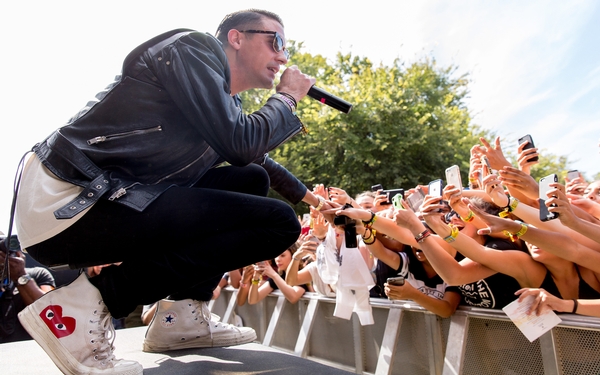 Rapper G-Eazy interacts with the crowd while guest performing with Kehlani at the Austin City Limits music festival on Oct. 4, 2015 in Austin, Texas. (Daniel DeSlover/Zuma Press/TNS)

By all accounts, G-Eazy has had an excellent past couple years: the San Francisco rapper’s 2014 major-label debut album, “These Things Happen,” landed at No. 3 on the Billboard 200; his latest work, last month’s “When It’s Dark Out,” sold more than 100,000 copies in its first week.

In the interim, he’s played nearly every major festival from Lollapalooza to Bonnaroo and Outside Lands. Despite it all, the soft-spoken MC still views himself as an underdog. “I’ve always though of myself as an outsider,” G-Eazy (born Gerald Gillum) says via phone from New York. “I guess I’ve always had a chip on my shoulder. Maybe that just comes from growing up differently and never really fitting in anywhere. Just kind of doing my own thing.”

What’s remained constant over the past decade is G-Eazy unveiling a steady stream of new music. By his count, the rapper has released 15 projects to date — beginning with “pure trash” mixtapes he recorded while still a student at Berkeley High School, followed in quick succession by a deluge of additional mixtapes and EPs. By the time he signed with RCA Records, in 2014, G-Eazy had carved himself into something of an Internet sensation as a self-made artist who built a rabid fan base by constantly pounding the pavement, using his charm and good looks to attract a female audience, all the while being unafraid to evolve his sound and style.

“I just stuck with it,” says Eazy, whose new album thrives on its minimalist sonic aesthetic and confessional lyrics. “There were probably seven or eight years before any music actually caught on. It’s all part of the process. Things don’t happen by accident. Even overnight sensations take years and years. I look at music as any other creative field: you have to push yourself to develop your craft, to improve your technique, your perspective.”

As a teenager growing up in the Bay Area with a single mom who worked two teaching jobs, the now-26-year-old Gillum gravitated toward music — and more specifically hip-hop — out of his and his friends innate love of making beats and writing rhymes. With MySpace and other self-promotional platforms growing ever popular for aspiring musicians at the time, Eazy grew enchanted by the viral fame he witnessed others achieving — most notably, his high school classmates the Pack, who recorded the hit song “Vans.”

“You felt like there was hope,” he says. “You could make a song at home, upload it and if it caught on online it could go viral. You could get discovered by record labels and you could become something.”

Today, G-Eazy has achieved a level of notoriety he could only have imagined back then. With mainstream recognition and a growing level of fame, however, he says it’s become increasingly complicated to make sense of the blurry line between him and his new, famous rap persona.

“I definitely acknowledge that I have a split personality,” he says. “Half of me is this very ordinary down-to-earth dude. And then the other half is this extraordinary, larger-than-life G-Eazy. Getting them to sit together in the same room is difficult sometimes. At the end of the day, I literally am these two people. It comes with the territory. When you sign up for this job, this lifestyle, you kind of know what you’re getting into. But it can still be weird sometimes.”

That hasn’t stopped him from making his most openly honest, jarring music yet. While there’s no shortage of rowdy, four-on-the-floor tracks, the most affecting songs on G-Eazy’s new LP are the ones in which he adopts a diarylike tone. “So hard on myself I think I’m going insane / The mind of a perfectionist is always in pain,” he raps on “Sad Boy.” Later, on “Everything Will Be OK,” arguably his most revealing song to date, Eazy reflects on his mom coming out as a lesbian and her partner’s tragic death.

“It’s a challenge to go there, but I feel like some of the most powerful music is music that’s really personal and honest and open,” G-Eazy says of making himself vulnerable via his music. “When you let people in like that they connect with you on a whole other level.

G-Eazy, who has toured with Drake, Lil Wayne and 2 Chainz, kicked off a nationwide headlining tour this month with Harlem rapper A$AP Ferg. Like his music, the rapper sees his evolving, energetic live show as a reflection of his personal and professional growth.

“I think I’m just addicted to progress, to moving forward,” he says. “If you look to where I come from there hasn’t been one moment that’s changed everything. I’ve never really had a hit song. I’m not co-signed by someone huge. It’s been step by step. Hard work and dedication.”