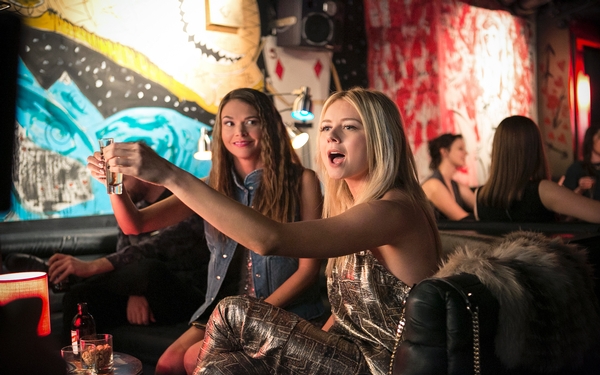 Darren Star’s “Younger” is a dreamy, confectionary fairy tale of New York in its second season on TV Land. Sutton Foster, formerly of the cultishly, critically admired “Bunheads” and before that a Tony-winning star of Broadway musicals, plays Liza, who gave up a career as a book editor to raise her daughter; now divorced at 40, she’s passed herself off as a 26-year-old in order to land a job as an assistant at a publishing house.

With wonderful contributions from Debi Mazar, Hilary Duff and Miriam Shor, the show, which airs Wednesdays, is a classic disguise comedy with a rom-com heart, like a chronological “Tootsie,” with the exception that all it takes for Liza to pass for a person 14 years her junior is some new clothes, a slight adjustment of posture and remembering to keep her cultural references in order.

That this conceit is not entirely whimsical is laid to rest by the presence of Foster, whose almost supernaturally youthful person validates the series’ premise. She and Star, himself a hard-to-place 54 and previously the creator of “Beverly Hills 90210” and “Sex and the City,” met on a rainy morning a couple of weeks back to discuss their show over coffee. A third season order, about which they pronounced themselves “hopeful,” was announced by the network the following day.

“I’m very patient,” said Star, “because I’ve had the experience of shows like ‘Beverly Hills 90210,’ which was not a success out of the gate. ‘Sex and the City’ didn’t hit at all our first season because nobody was really watching HBO for series, really. It didn’t start to take off at all until the second season. I just love having a supportive network that likes what we’re doing.”

In turn, he likes what Foster is doing.

“I don’t know that there is anybody else who would have been able to do it and make it real,” said Star. “You count on luck and serendipity that you’re going to find the right actor for a role. This was one where there really weren’t a lot of options out there. I didn’t want to cast someone who was in their early 30s and playing 40; I didn’t want to cheat the audience. And I was actually shocked that Sutton was almost 40 at the time we met; it was too good to be true.”

Age had not previously preyed on Foster’s mind.

“I started doing the show, and then all of a sudden I was like, ‘Oh, am I old? Did that just happen overnight?’ Even ageism and all that stuff, I hadn’t really thought about any of it until I started doing press for Season 1 and people kept asking me about it.”

At the same time, he said, “you don’t lose that younger person inside of you. It’s really just a choice of how you decide to live your life. Because you’re of a certain age it doesn’t mean you can’t be with younger people, or vice versa. And the surprise when it comes and some of those younger characters realize they’ve had an older friend for some time is going to be eye-opening for them too.”

That news has already come to Josh (Nico Tortorella), Liza’s young tattoo artist boyfriend to whom she revealed her age at the end of Season 1, bringing a new set of complications to Season 2 and giving Tortorella deeper notes to play.

“He’s an idealistic young guy who wants to live his life honestly,” said Star, “and I do believe a lot of people feel that way. Liza’s an older corrupting influence in a sense, sort of like, ‘You get older, you’ve got to make some compromises.’ And he’s like, ‘I’m not going to start down that road.’”

Whereas Star is concentrating all his energies on “Younger” — “having in the past spent a lot of time piling things on simultaneously in a way you don’t really get to enjoy anything” — Foster, said Star, “will work until midnight and then be off the next day on a Saturday to do a concert tour somewhere and come back Monday at 6 in the morning. It’s like, ‘What did you do this weekend?’ ‘Oh, I did a couple concerts.’ I’m like, what?”

“I’m a gypsy,” she said, using the theatrical sense of the word, an itinerant chorus member. “I’m pounding the pavement. If I weren’t here, I’d be out busking on Hollywood Boulevard trying to make a little extra cash. I have that mentality — even though I’m starring in a television show, I’m like, well, it could all (fall apart).”

Is there anything that makes her look at younger generations and think, “I just don’t get it”?

“When I was younger I’d be like, ‘Why don’t people just keep like adapting and staying trendy?’ And now I feel resistant to it. There’s all this new virtual-reality stuff.”

Said Star: “You may not be getting on that bandwagon.”

“I hate it,” said Foster. “I hate the idea of it, it makes me crazy. It feels so like one more thing that’s removing us from being alive on the planet.”