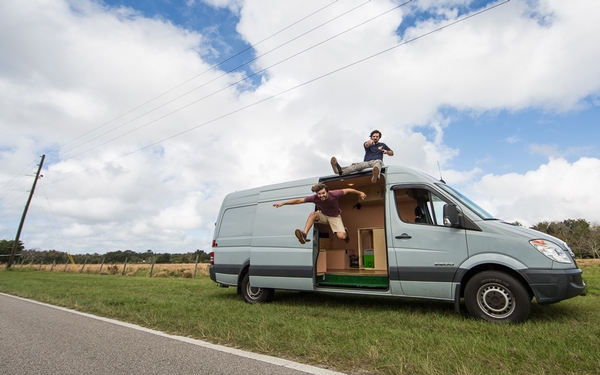 Justin Fricke, top of van, and his younger brother, Adam, two freshly minted University of Central Florida graduates, are driving across the country in their van for the next year.

ORLANDO, Fla. — The idea, like many ideas often do, emerged out of a long talk over beer in 2014.

Justin Fricke and his girlfriend had talked about a cross-country yearlong road trip. But after she broke up with him, Justin sat at Happy Hour, drinking two-for-ones with his younger brother, Adam, to commiserate.

Why couldn’t the brothers go on the trip together instead?

“It wasn’t what I loved doing. I didn’t pop out of bed excited to go to work every day,” said Justin Fricke, who received his communications degree from UCF in 2012. “Who knows if we’re going to climb back and land a job as quick as we want? Once I figured that was the fear talking to me, I was able to push it aside.”

The two brothers have cooked Spam and eggs for breakfast on the propane stove inside a van they usually park overnight at a Wal-Mart. They go days without showering.

But they also feel free — to rock climb, to surf the Atlantic Ocean, to make friends with strangers on the ferry in the Outer Banks of North Carolina and to take photographs of their adventures without ever going into an office and sitting behind a desk for eight hours.

The idea of someone going on a journey to escape corporate America and find himself wasn’t born from this generation, said Amanda Anthony, an assistant sociology professor at UCF.

But for millennials, what makes them unique is how they use social media to share their adventures in real time.

“It’s a combination of getting away while staying connected,” Anthony said.

On their daily blog, the Frickes write stories and post photographs and YouTube videos of their adventures. They plan to drive across the country for the next year in their van.

“The road is long and winding but the future looks bright … or maybe that’s just the sun setting on the horizon. Either way, it’s pretty,” Justin Fricke wrote.

They explore new cities, searching for parking lots to rest overnight and tapping into free Wi-Fi from nearby hotels.

They aim to visit every state and to see the country’s beauty — the mountains, the oceans ripe for surfing, the desert states. They hope their digital and storytelling skills will lead to future employment down the road.

The brothers, who grew up in Winter Springs, Fla., use Twitter and Instagram to connect with corporate sponsors for the trip. It won them, among other things, a solar panel for their van and money that was “enough to keep gas in the tank and food in our bellies,” Justin Fricke said, adding they also saved several thousand dollars in two years to finance the trip.

They souped up a 2008 Dodge Sprinter van, installing a mattress as comfortable as the ones at sleep away camp, a pump sink, a pop-up table and a propane stove to cook their Ramen noodles and Spam and eggs.

They acknowledge the space can be tight and perhaps can sometimes feel tighter because they are so different. Justin is more reserved; Adam is the free bird.

Like any mother, Annette Fricke worries if her sons are safe.

But she also knows people often talk about their dreams of traveling. Then life happens, and too often, the dreamers become sidetracked and their plans to see the world die quietly.

“This is the perfect time,” she said. “They are young and adventurous.”