Sundance 2016: Director of ESPN’s ‘O.J.: Made in America’ finds new ground on Simpson 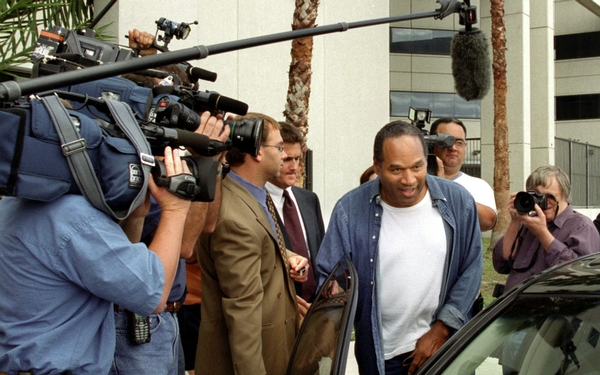 O. J. Simpson steps into a car just after posting a $9,000 bond and being released from a Miami-Dade County jail in Florida in 2001.

The O.J. Simpson affair would seem to have long ago worn out its media welcome. Every news special, documentary and tell-all book has, in the two decades since the so-called trial of the century, told us everything we want to know and more. As if all that weren’t enough, FX will soon air the fact-based dramatization “American Crime Story: The People v. O.J. Simpson.”

But it turns out, there is another tale left to tell. And it’s a doozy.

At the Sundance Film Festival on Friday, ESPN will unveil “O.J.: Made in America.” Directed by the nonfiction filmmaker Ezra Edelman, the documentary series is a sprawling, substantive affair with some startling conclusions.

Its five episodes will span 7½ hours at the festival (two sessions with a break in between) and 10 hours when it arrives on commercial television (five nights, likely consecutive, in the spring or early summer).

Over its running time, “Made in America” covers a lot more than the murder of Nicole Brown and Ronald Goldman and the sociological Rorschach test that sprung up in its wake. The miniseries, which the Los Angeles Times was shown in advance of the festival, uses the life of the former University of Southern California star as a way to investigate race in America.

Edelman’s tale is something of a double helix, telling the origin story of a complex crossover celebrity while chronicling black-white tension in Los Angeles, from Watts to Rodney King. The trial is important, but only as the convergence of those strands.

“What I want people to think about is that there’s more to think about,” Edelman said during an interview here this week. “This isn’t a story that started in June 1994 and ended in the fall of 1995. It started in the 1960s and even before that. And it continues today.”

At a moment when crime-themed docu-series have taken hold on television, and when the issue of double standards of black justice crop up in such areas as police behavior and the Oscars, “Made in America” is a timely exercise. It is also a bold one, taking one of the best-known stories of our time and seeking to reshape the context in which we place it.

Edelman’s series could change how people view the O.J. trial — in part because they’ll stop viewing it as being much about a trial. That is evident early on: Apart from an opening scene showing O.J. talking to officers in his current Nevada prison, the first three hours of the miniseries don’t deal with the star’s legal troubles at all.

Long before that fateful June night, Simpson is depicted as a unique post-Watts figure who broke a glass ceiling when he achieved mainstream celebrity status, via a Hertz commercial in the1970s, but did so seemingly apart from every major civil rights flashpoint of the era. On display is a charismatic football prodigy finding his way in college and eventually with the NFL’s Buffalo Bills. But even as Watts and other crucibles were happening, he was uttering his now-infamous “I’m not black; I’m O.J.,” according to a childhood friend.

The third and fourth episodes do tangle with the legal proceedings, and it is here that Edelman is on well-trod ground. But he manages to find plenty of new terrain here too, weaving the chase into a thriller whose inevitable conclusion makes it no less taut. (He is helped in this by new perspectives: a SWAT team chief racing to beat Simpson to his home and a helicopter traffic reporter who first spotted the Bronco.) The fifth chapter provides a kind of surreal epilogue on his post-trial life.

Yet it is race, and how Simpson both experienced and refracted it, that is the documentary’s narrative. Not the question of innocence — Edelman presents the evidence in a way that’s pretty clear he’s concluded Simpson committed the murders — but the significance of exoneration. “Made in America” offers the provocative implication that although the bulk of evidence points to guilt, the tide of black history and injustice may argue for an acquittal.

“To me a lot of this becomes about emotion versus intellect,” Edelman said when asked about this duality. “And the intellect is easy to glom on to because it’s about the evidence. But how do you convey emotion? How do you convey the depth of historical experience? That’s what I was trying to do”

Edelman is ideally suited to examine, and bridge, this split. The son of a black activist mother and white professor father, he said his own identity has been informed by multiple racial perspectives. At 41, he’s also old enough to have experienced the trial as an adult but not so old his views about it were cast in concrete.

“Made in America” was first thought up by ESPN as a five-hour look into Simpson. Network executives came to Edelman, who was well-credentialed to explore this as a filmmaker having previously investigated competing racial perspectives (“Magic & Bird: A Courtship of Rivals”) and the intersection of sports, money and pop culture (“Requiem for the Big East”). Eventually it mushroomed into something larger.

Connor Schell, the senior vice president and executive producer at ESPN who oversaw the project, says he thinks even without a specific peg — and even after the FX series, which debuts Feb. 2, airs — there will be plenty of reasons for people to tune in to ESPN’s effort.

“This story is a vehicle to speak about race and celebrity, two of the dominant themes of the last 50 years.” Though he acknowledged that finding five consecutive nights clear of live programming wasn’t easy, he said it wasn’t airtime that gave the network pause. “Our concern was never, ‘Is this going to be so long that people won’t watch?’ It was, ‘Is this going to be good enough to merit the length?’ And I think with all it gets into, it is.”

For those looking for fresh details, there is still plenty to sate. Edelman features interviews with 66 people — players, friends, experts — peppering the series with personal insight. There is the tale from a childhood friend about how Simpson once tried to steal his own best friend’s girlfriend, an anecdote that will have more sinister echoes when he rails again his estranged wife’s new lovers years later.

Simpson as portrayed here often seems likable but can also startlingly turn on a dime, switching on the charm for one of Brown’s romantic partners just a moment after mortally threatening him.

And there are touching accounts from those who knew the victims, particularly Robin Greer, an actress and Brown’s longtime friend, who offers key insight into Brown’s thinking.

The trial had its share of revealing personalities too. Simpson, prosecutor Christopher Darden and Judge Lance Ito declined to be interviewed, but there is much interview material from prosecutor Marcia Clark, LAPD Detective Mark Fuhrman and District Attorney Gil Garcetti for the prosecution (the last one giving a rare interview), as well as Barry Scheck and Carl Douglas for the defense.

The latter is particularly good at exploring the trial-as-theater idea. Of the decision, before a jury visit to Simpson’s house, to adorn the walls with photos of black people whom Simpson rarely spent time with, Douglas quipped, “If we had a Latin jury, we would have had a picture of him in a sombrero. There would have been a mariachi band out front.”

The lawyer’s point is humorous, but it captures a central irony: After years seeking to distance himself from his race, Simpson was a very unlikely repository for its support.

Edelman ultimately takes a dim view of what this means.

“O.J. is a sad, depressing American story, and a tragedy,” he said in the interview. “But the tragedy is not that this beautiful, charismatic person ended up where he is today. It’s that the people who invested in him had so little hope that this was something so important to celebrate.”

The series is an illumination of both sides of the debate — or, more plainly, of black and white views of the case. Edelman offers hard evidence to counter those convinced of Simpson’s innocence but at the same time offers good reasons why those certain of guilt might question their desire for a conviction.

In other words, though it features a very compelling figure, the most fascinating character in “O.J.: Made in America” isn’t the former football star; it’s us.